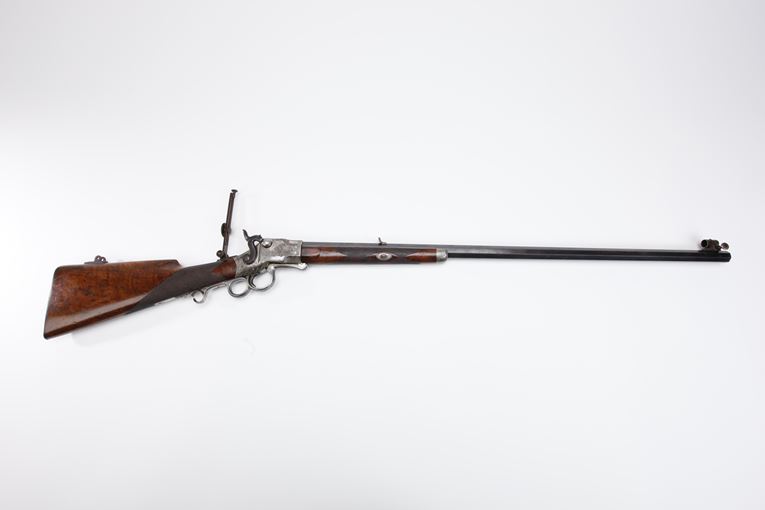 A limited production example, this single shot rifle could have been used at Creedmoor Range as it was fitted with dual bases for the vernier tang sight allowing it to be fired in a reclining position.

This example represents the height of American craftsmanship. Engraved and plated, bright metal contrasts sharply to dark-grained wood. As exemplified by Wesson's work, pride in being able to shoot well was reflected in teh beauty of most target rifles that were produced in the United States. --Dr. William L. Roberts, THE AMERICAN LIBERTY COLLECTION; #85 The International Match held at the famous Creedmoor Range on Long Island in 1874 pitted an upstart American squad against a championship team from the Irish Rifle Association. The Irish were veterans of international competition and were generally acknowledged as the best in the world.

The match received international publicity, and as a result, target shooting blossomed into a major American sport. The visiting team was outfitted with .45 caliber Rigby muzzle-loading match rifles. These were built by Master Gunsmith John Rigby, also a member of the Irish team and widely considered to be one of the best shots in the British Empire. His rifles had a reputation for accuracy, as well as a long history in British competition.

The American competitors used both Sharps and Remington .44 caliber breech-loading single-shot rifles that were loaded with heavy powder charges and heavy paper-patched bullets. The most effective of all long-range target cartridges were the .44-90 Sharps and .44-90 Remington. The .44-90 Remington cartridge was loaded with a 550-grain bullet which had a muzzle velocity of 1250 f.p.s. The .44-90 Sharps cartridge was typically loaded with a 520-gr. bullet capable of 1270 f.p.s. Muzzle energy of both of these rounds was about 1850 ft.-lbs, compared to 1600 ft.-lbs. for the standard .45-70 Government cartridge. Neither cartridge approached the power level of the .44-100 Remington or .45-100 Sharps rounds which delivered over 2,200 ft.-lbs. of muzzle energy.

The special high-quality Sharps and Remington rifles furnished to the American team were fitted with precision sights. The usual wind-gauge target front sight was mounted in a dovetail cut in the barrel near the muzzle. This assembly provided accurate lateral adjustment of the front sight by means of a screw. Accurate scales were engraved on the front side of the sight assembly so that precise measurements of windage could be made. The sight tube or globe was slotted so that interchangeable sighting inserts could by used to provide optimum sight patterns for various target conditions.

The elaborate aperture rear sights fitted to these rifles were either mounted on the receiver tang or attached to the top of the buttstock forward of the buttplate. The latter sight position was used by some shooters who preferred to lie on their backs and support the rifle muzzle with their knees or feet. The long sight leaves employed on these rear sights pivoted on a fixed base. The shooter aimed through a tiny aperture peephole drilled in the center of the 1-inch diameter sunshade disk. The vertical position of the sighting aperture disk was usually determined by a long slender screw less than 1/8 in diameter, with a 20-pitch thread that permitted very accurate elevation adjustments. These tall rear sights were precision instruments, and often included vernier adjustment scales. When not in use, they were either stored in protective cases or folded down flat against the receiver tang.