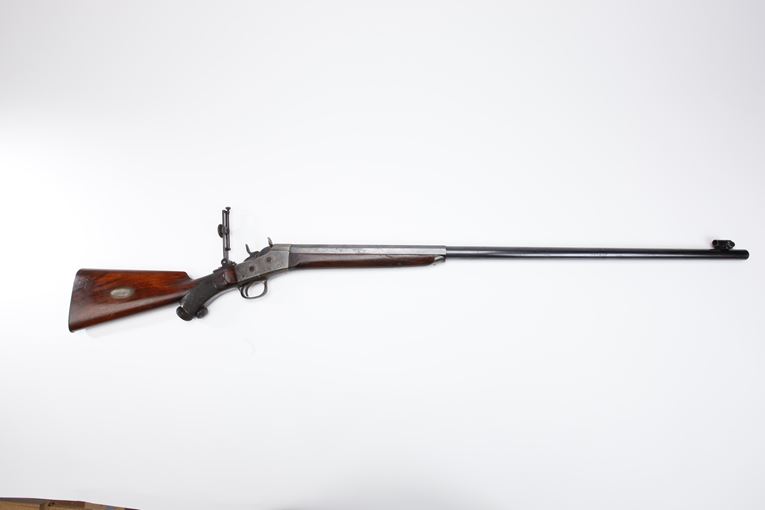 This adjustable pistol-grip rifle was owned by H. H. Handy, a noted competitive shooter of the 1890s. Remington-Hepburn No.3 Rifles were made in various models c.1880-1907.

By 1828, he had established his own forge in Ilion, and he soon came to dominate the local trade, producing over 8,000 barrels per year for gunsmiths who would do final rifling and fitting.

The business expanded through the 1850s, and handgun production began in 1857 with the introduction of the Remington-Beals pocket revolver. The coming of the Civil War naturally brought about a dramatic increase in the demand for firearms, and Remington's production also increased to keep pace. During this period, the company manufactured both .36 and .44 caliber revolvers, as well as Model 1863 Percussion Contract Rifle, popularly known as the "Zouave" rifle. The post-war years brought smaller pocket pistols and deringers, the Remington-Smoot metallic cartridge pistols, Remington Single Action Army revolvers, rolling block rifles and pistols, slide, autoloading, and hammerless shotguns, and the Remington-Hepburn falling block rifles. During the 20th century, Remington has established itself as a manufacturer of high quality sporting arms, especially with upland game and bird hunters.

During the Second World War, Remington manufactured the M1903 (Modified) rifle, a transitional long arm in which stamped parts replaced some that had been milled in the earlier model, while other parts were dispensed with altogether in the interests of reducing production time. The company also manufactured the redesigned M1903A3 battle rifle and M1903A4 sniper rifle. Eliphalet Remington II died in 1861, at which time Philo took over management of the company.

Samuel died in 1882, and Philo purchased his share in the company. By 1886, E. Remington & Sons had experienced serious downturns, and the company went into receivership. In 1888, Marcellus Hartley, a partner in the New York sporting and military goods firm of Schuyler, Hartley, and Graham, as well as the founder and owner of the Union Metallic Cartridge Company, went together with Winchester Repeating Arms Company to purchase Remington.

Each partner had an equal share of the firm, which was renamed Remington Arms Co., with Hartley serving as president and Thomas Bennett of Winchester assuming the role of vice president.

In 1934, both company's name and ownership changed as Remington-U.M.C. was purchased by DuPont and reorganized as the Remington Arms Co., Inc. The Ilion armsmaker remained a part of the DuPont organization until 1993, when Remington was purchased by the investment group of Clayton Dubilier Rice. U.S. TRIUMPH AT CREEDMOOR. The great International Match held at the famous Creedmoor Range on Long Island in 1874 included matches fired at 800, 900, and 1000 yds. and was extremely close. The Americans won at 800 yds. with a score of 326 to 317. At 900 yds. the Irish won by 312 to 310, and they won again at 1000 yds. by 302 to 298. However, the final result was a close victory for the AmericansÑ934 to 931. The match received international publicity and target shooting blossomed into a major American sport.

The Sharps and Remington breech-loading rifles used by the Americans to defeat the Irish muzzle-loading rifles were chambered for powerful cal. .44 blackpowder cartridges loaded with heavy powder charges and heavy paper-patched bullets. The most effective of all long-range target cartridges were the .44-90 Sharps and .44-90 Remington. The .44-90 Remington cartridge was loaded with a 550-gr. bullet which had a muzzle velocity of 1250 f.p.s. The .44-90 Sharps cartridge was often loaded with a 520-gr. bullet capable of 1270 f.p.s. Muzzle energy of both of these rounds was about 1850 ft.-lbs. Compared to 1600 ft.-lbs. for the standard .45-70 Government cartridge. Neither cartridge approached the power level of the .44-100 Remington or .45-100 Sharps rounds which delivered over 2,200 ft.-lbs. of muzzle energy.

The special Sharps and Remington rifles furnished the American team in 1874, as well as later high quality target rifles offered by these and other firms, were fitted with precision sights. The usual wind-gauge target front sight was held in a dovetail cut in the barrel near the muzzle. This assembly provided accurate lateral adjustment of the front sight by means of a screw. Accurate scales were engraved on the front side of the sight assembly so that precise measurements of windage could by made. The sight tube or globe was slotted so that interchangeable sighting inserts could by used to provide optimum sight patterns for various target conditions.

The elaborate aperture rear sights fitted to these rifles were either mounted on the receiver tang or attached to the top of the buttstock just forward of the buttplate. The latter sight position was used by some shooters who preferred to lie on their backs and support the rifle muzzles with their knees or feet. The long sight leaves employed on these rear sights were pivoted to the fixed bases. The shooter aimed through a tiny peephole or aperture drilled in the center of the sunshade disk which was usually slightly over one inch in diameter. The vertical position of the sighting aperture disk was usually determined by a long slender screw less than 1/8" in diameter with a 20-pitch thread permitting very accurate elevation adjustments. These tall rear sights often included vernier adjustment scales and were precision instruments. When not in use they were either stored in protective cases or folded down flat against the receiver tang.