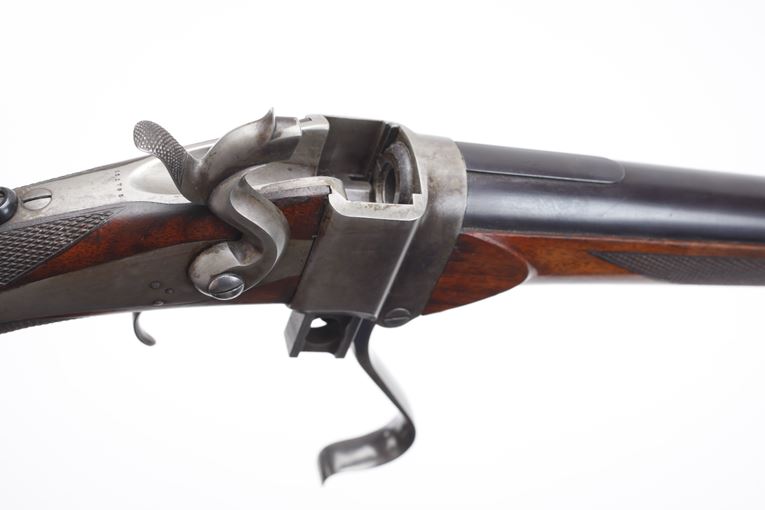 In 1855, the Sharps company introduced the Model 1855 Carbine. These arms retained the slanting breech and buttstock patch boxes of earlier models, but featured the Maynard tape primer system. Approximately 800 .54 caliber carbines were manufactured for the U.S. government, and an additional 6,000 Model 1855s in .577 caliber were purchased by Great Britain. While these carbines were in production, both Robbins & Lawrence and Sharps suffered serious financial losses. The latter corporation went bankrupt, and their operations were taken over by Sharps and moved to Hartford. The Sharps New Model 1859, introduced in that year, was available as a carbine, and in round-barrel military rifle or octagonal-barrel sporting rifle versions. Its straight-breech design is credited to Richard S. Lawrence, formerly of Robbins & Lawrence, who had become the superintendent of the Sharps Rifle Company.

This design, in conjunction with a breechblock-mounted plate capable of slight rearward movement when under pressure, created a moderately effective gas seal. New Model 1859 arms also employed an improved version of the Sharps pellet primer system which allowed the pellet feed mechanism to be disengaged. Ordinary percussion caps could then be used, with the supply of pellet primers held in reserve. Like earlier Sharps designs, the Model 1859 fired a glazed linen combustible .52 caliber cartridge. When closed, the breechblock sheared off the rear of the cartridge, exposing the propellant.

The New Model 1859 was followed by the New Model 1863 and New Model 1865 Carbines and Rifles. These were nearly identical to the New Model 1859, differing primarily in barrel stampings, the omission of buttstock patchboxes, and in the design or absence of bayonet lugs. Many versions of all three arms were later converted for use with .50-70 and .52-70 caliber metallic cartridge ammunition in the years following the Civil War. The New Model 1869 Carbine and Rifle, available in .44-77, .50-70, and .60 calibers, were the first Sharps arms designed for use with metallic cartridges. In 1874, the firm was reorganized as the Sharps Rifle Co., with operations remaining in Hartford. In 1876, manufacturing was moved to Bridgeport, Connecticut, where it remained until 1881.

This period saw the manufacture of some of the more notable of Sharps longarms, beginning with introduction of the Model 1874 Rifle. Nicknamed "Old Reliable," this arm, available in a variety of calibers, barrel lengths, sights, and other features, became a favorite with both Plains buffalo hunters and competition shooters. Many Fancy-Grade models featured engraving which ranged from simple scrollwork to elaborate hunting or western scenes on their surfaces.

The Sharps Model 1877 shared in the popularity of its predecessor. These deluxe-grade heavy-barreled .45 caliber rifles were designed specifically for Creedmoor and other long-range target shooters. Only 100 of these were produced, and they are as sought-after today by collectors as they were by competitors at the time of their introduction. The last rifle to be produced by the Sharps Rifle Company was the Model 1878 Sharps-Borchardt Rifle. This arm was developed by Hugo Borchardt, who later became famous for his automatic pistol designs. These rifles, with their flat-sided frame and hammerless appearance, differ notably from earlier Sharps designs. Like the Model 1874, the Sharps-Borchardt was available in a variety of stocks, barrel lengths and weights, sights, calibers, and other features, including deluxe grade models.

These popular rifles were produced until 1881, when the Sharps Rifle Company went bankrupt and ceased operations. Although his association with the Sharps Rifle Manufacturing Company ended in 1853, Christian Sharps continued to work as a designer and manufacturer of firearms. He returned to Philadelphia and formed C. Sharps & Co., a manufacturer of percussion revolvers, breechloading single-shot pistols and pistol-rifles, and four-shot pepperbox pistols.

In 1862, Sharps entered into a partnership with William Hankins. Their new company, known as Sharps & Hankins, continued to produce pepperbox pistols, as well as the single-shot .52 caliber Model 1861 Navy Rifle and the Model 1862 Carbine, both of which featured sliding breech actions. The partnership was dissolved in 1866, and Sharps reverted to the C. Sharps & Co. name. This firm ceased operations in 1874 with the death of Christian Sharps on March 12 of that year. - U.S. TRIUMPH AT CREEDMOOR The great International Match held at the famous Creedmoor Range on Long Island in 1874 included matches fired at 800, 900, and 1000 yds. and was extremely close. The Americans won at 800 yds. with a score of 326 to 317. At 900 yds. the Irish won by 312 to 310, and they won again at 1000 yds. by 302 to 298. However, the final result was a close victory for the AmericansÑ934 to 931. The match received international publicity and target shooting blossomed into a major American sport.

The Sharps and Remington breech-loading rifles used by the Americans to defeat the Irish muzzle-loading rifles were chambered for powerful cal. .44 blackpowder cartridges loaded with heavy powder charges and heavy paper-patched bullets. The most effective of all long-range target cartridges were the .44-90 Sharps and .44-90 Remington. The .44-90 Remington cartridge was loaded with a 550-gr. bullet which had a muzzle velocity of 1250 f.p.s. The .44-90 Sharps cartridge was often loaded with a 520-gr. bullet capable of 1270 f.p.s. Muzzle energy of both of these rounds was about 1850 ft.-lbs. Compared to 1600 ft.-lbs. for the standard .45-70 Government cartridge. Neither cartridge approached the power level of the .44-100 Remington or .45-100 Sharps rounds which delivered over 2,200 ft.-lbs. of muzzle energy.

The special Sharps and Remington rifles furnished the American team in 1874, as well as later high quality target rifles offered by these and other firms, were fitted with precision sights. The usual wind-gauge target front sight was held in a dovetail cut in the barrel near the muzzle. This assembly provided accurate lateral adjustment of the front sight by means of a screw. Accurate scales were engraved on the front side of the sight assembly so that precise measurements of windage could by made. The sight tube or globe was slotted so that interchangeable sighting inserts could by used to provide optimum sight patterns for various target conditions.

The elaborate aperture rear sights fitted to these rifles were either mounted on the receiver tang or attached to the top of the buttstock just forward of the buttplate. The latter sight position was used by some shooters who preferred to lie on their backs and support the rifle muzzles with their knees or feet. The long sight leaves employed on these rear sights were pivoted to the fixed bases. The shooter aimed through a tiny peephole or aperture drilled in the center of the sunshade disk which was usually slightly over one inch in diameter. The vertical position of the sighting aperture disk was usually determined by a long slender screw less than 1/8" in diameter with a 20-pitch thread permitting very accurate elevation adjustments. These tall rear sights often included vernier adjustment scales and were precision instruments. When not in use they were either stored in protective cases or folded down flat against the receiver tang.