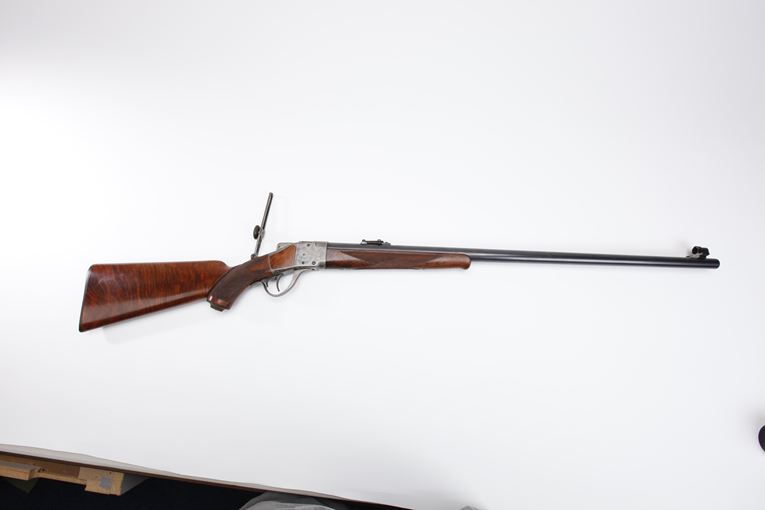 The Model 1878 Sharps-Borchardt was offered in several finish levels, among the highest being this version, equipped with a wood-paneled receiver version and vernier tang sights. Manufactured c. 1878-1881. SN 17056

In 1878, Borchardt worked for Sharps Rifle Co. to design a new line of rifles. He produced a successful design, but it was too modern for American tastes. Borchardt's skill was not appreciated in the United States, so he went to Europe, where his uniquiness was appreciated. While working in Germany from his own prototype, he helped develop the toggle-operated Luger pistol. This gun became the standard officer's pistol for Germany in two World Wars. After other successes, Borchardt decided to remain in Europe where his products enjoyed more commercial success. --Dr. William L. Roberts, THE AMERICAN LIBERTY COLLECTION; #97 Christian Sharps (1811-1874) was the originator of a line of sturdy, practical, and popular military and sporting rifles and handguns that were associated with several events that shaped American history in 19th century, including armed conflict in Kansas during the 1850s, the Civil War, the era of the Plains buffalo hunter, and the rise of modern long-range competition shooting during the 1870s.

Sharps worked at John Hall's Rifle Works in Harpers Ferry, Virginia, where he learned the principles of arms manufacturing. His first breechloading rifle design was patented in 1848, and the toggle-linking trigger guard and vertically operating sliding wedge breechblock of later Sharps rifles and carbines date from that patent. These features are still with us today, and have seen use in both rifle and artillery breech mechanisms. The spring lever-toggle-breech mechanism of the Borchardt-Luger semi-automatic pistol also had its roots in Christian Sharps' lever-linked breech. In 1850, Sharps moved to Mill Creek, Pennsylvania, near Philadelphia, and contracted with the firm of A. S. Nippes to manufacture two of his sporting rifle designs, which became known as the Model 1849 and Model 1850.

Faced with difficulty in obtaining financing for further ventures, Sharps left the Philadelphia area in 1851 and relocated to Hartford, Connecticut, where he formed the Sharps Rifle Manufacturing Company. Lacking production facilities, he contracted with the Windsor, Vermont firm of Robbins & Lawrence to manufacture his new breechloader. This venture continued until 1855.

Among the Sharps-designed firearms manufactured under this association were the Model 1851 "Box Lock" Carbine, which featured the Maynard tape primer system, and the Model 1852 and Model 1853 "Slanting Breech" Carbines, which were equipped with the Sharps-patented pellet primer system as an integral part of its breech mechanism. Model 1853 Carbines were nicknamed "Beecher's Bibles," after noted New York clergyman and abolitionist Henry Ward Beecher. Approximately 900 of these arms were shipped in heavy crates marked BIBLES for use by anti-slavery "Free Soil" settlers who were fighting against pro-slavery forces in "Bleeding Kansas" during the 1850s.

One of the most famous Free Soilers was John Brown, who later used 300 Model 1853 Carbines in his ill-fated attempt to capture the U.S. Armory at Harpers Ferry, Virginia in 1859. Christian Sharps served as technical advisor to the Sharps Rifle Manufacturing Company, receiving royalties on the manufacture of their firearms. His relationship with the company was a rocky one, and in 1853, Sharps severed all connections with the firm. There is no evidence that he ever had any further association with the company that continued to bear his name.