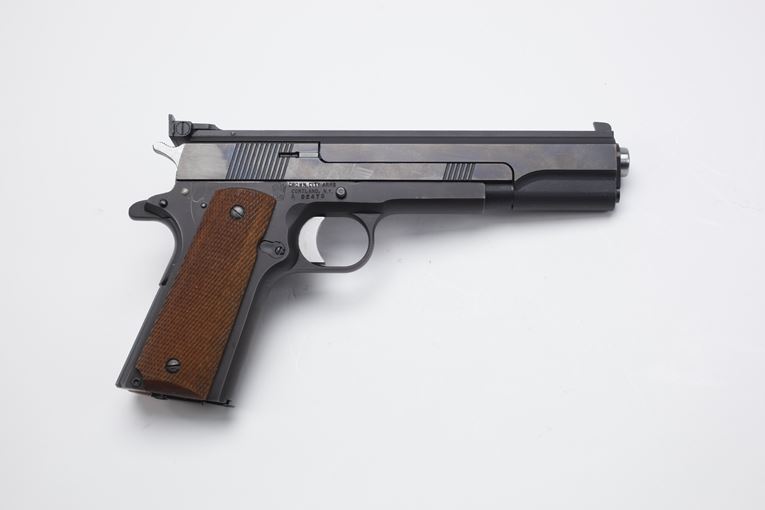 Adapting .45 caliber Model 1911 pattern pistols to fire .22 caliber ammunition is a task handled by this conversion unit, which replaces the centerfire slide and barrel unit. SN A02479


NRA conventional pistol competition includes events for .22 cal., center fire and .45 cal. pistols and revolvers. Before 1960, this generally meant a .22 semi-automatic pistol (.22 revolvers were represented, but as a definite minority), a .38 Special cal. revolver and a 1911 or 1911A1 type .45 cal. pistol (.45 revolvers were present, but very rare). About this time, several factors combined to push the .38 cal. revolver into virtual eclipse.

By 1960, custom gunsmiths and military team armorers had discovered how to modify the 1911-style pistol to shoot light-recoiling semi-wadcutter ammunition with accuracy equal to that of the revolver. The .45 pistol, of course, meets the rule book definition of center fire:"Center fire pistols or revolvers of .32 caliber or larger...", and, since scoring is done from the outer edge of the bullet hole, its ammunition has a scoring advantage. While some traditionalists stayed with the revolver and a greater number chose to shoot some version of a semi-automatic pistol in .38 Special, by far the greatest number elected to simplify their competition outfits by shooting the .45 in all center fire and .45 cal. events. Match quality .22 conversions, such as this Kart, let the shooter use pistols with identical grip dimensions for all events.