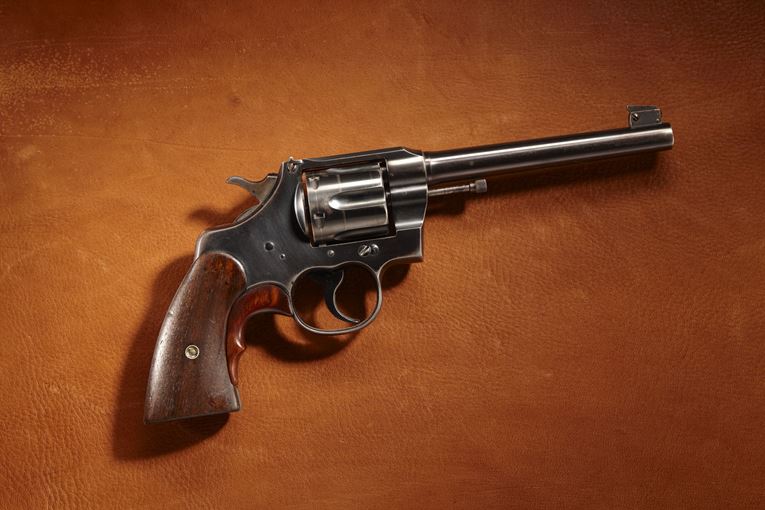 This custom target revolver was specially ordered from Colt in 1929 by Arlayne Brown, a noted female pistol competitor, for use at the Camp Perry National Matches. By age 14, Brown had won 19 shooting medals and was the girls' pistol champion at Camp Perry. During the 1930s, she demonstrated her shooting prowess as a member of the Ringling Brothers, Barnum & Bailey Circus "Wild West" Show.

The company's assets were sold at auction, and Colt turned his attention to other areas, including the use of electric current from galvanic batteries to detonate underwater explosive mines. The U.S. government was sufficiently interested in this idea that Colt received funding to continue his work for possible use in harbor defense. During this period, Colt met Captain Sam Walker of the Texas Rangers. Walker and his fellow Rangers had experience with Colt's Paterson revolvers, and one Paterson-armed troop of 15 men under the command of Jack Hays had successfully charged and defeated 80 Comanches, then considered to be the finest light cavalry in the world. Walker believed that an improved version of the earlier revolver would be an asset on the frontier. The two men designed a massive 4 pound, 9-ounce .44 caliber six-shot revolver, and the government ordered 1,000 of them for issue to mounted troops. Since Colt no longer had a manufacturing facility, he contracted with Eli Whitney of Whitneyville, Connecticut, to produce these guns.

This order was completed in 1847, and Colt once again devoted himself to firearms production. He established a new factory in Hartford during that same year, and began production of a smaller, lighter .44 caliber revolver. These so-called "transitional Walkers" were followed by the First, Second, and Third Model Dragoon revolvers, as well by as the Baby Dragoon, the Model 1849 Pocket Revolver, and the Model 1851 Navy Revolver. Many of these guns saw service through the Civil War and beyond. The discovery of gold in California stimulated the demand for firearms, and Colt also received orders from Russia and Turkey during the Crimean War. He expanded his operations to England, operating a manufacturing plant in London between 1853 and 1857. By this time, Colt operated the world's largest private armory, and he had introduced standardized production, division of labor, and assembly-line mass-production methods to his factory.