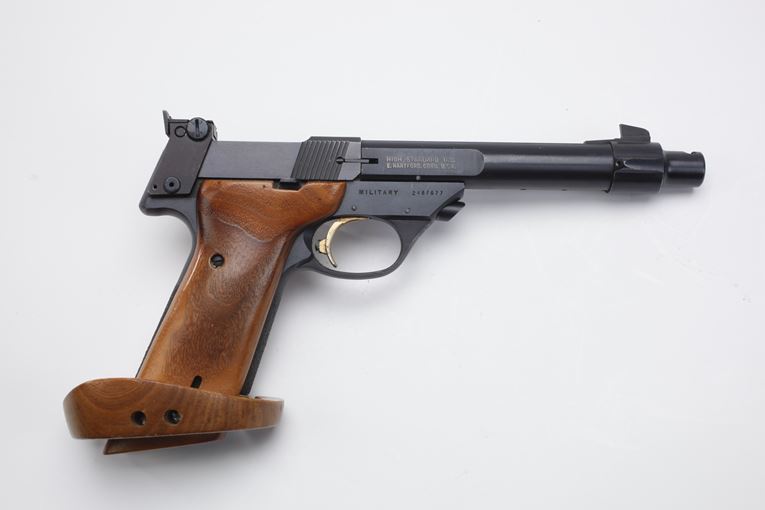 This High Standard semi-automatic features match shooting modifications such as custom target grips and a muzzle stabilizer. The "Trophy" model was introduced in 1957 and was the top-of-line of High Standard's target pistols. SN 2487677


The High Standard Manufacturing Company was founded in 1926 in Hartford, Connecticut by Carl Gustave ("Gus") Swebilius, a former employee of the Winchester Repeating Arms Co. Originally a manufacturer of gun barrels, the company acquired the bankrupt Hartford Arms and Equipment Company in 1932 and began to produce that company's pistol designs under the High Standard name. Although the firm would eventually produce a full line of rifles, shotguns, pistols, and revolvers, High Standard is best known as a manufacturer of quality .22 caliber semi-automatic pistols. Original models included the small-frame hammerless Model B and Model C, which featured small grips and fixed sights.

The company later introduced the larger frame hammerless A, D, and E models, which included adjustable sights and a slide stop which held the slide open after the last shot had been fired. High Standard also produced the HA, HB, HD, and HE exposed hammer guns based on earlier designs.

In 1938, High Standard also began work on a .45 ACP caliber pistol based on a Grant Hammond design which had competed unsuccessfully in the Army's pistol trials of 1907-11. The company's attempts to produce a successful centerfire pistol design continued through the war years with the limited production of .25, .32, .380, and .38 Special caliber models, none of which went beyond the experimental stage. During the post-war years, High Standard also developed a 9mm double-action pistol for military use, but like the earlier Hammond .45, this pistol was not adopted by the Army.

The Second World War caused a massive mobilization of all industries for war production, and firearms manufacturers played a prominent role in this effort. High Standard's H-model .22 caliber pistols were purchased by the Army for troop training. Limited numbers were also produced with attached silencers for covert operations behind enemy lines. In addition, Gus Swebilius, the company's founder, invented the 9 mm M42 UD submachine gun. Although linked with High Standard and Swebilius, the M42 UD was never produced by the Hartford company beyond the manufacture of prototypes and a few early versions. Actual production was undertaken by the Marlin Firearms Company, which turned out approximately 15,000 for use by OSS operatives and members of anti-Nazi resistance groups. High Standard also produced complete Browning .50 caliber machine guns and parts for the Browning .30 caliber machine gun during the war.

During the late 1940s, High Standard introduced the G series, a redesigned pistol line which featured interchangeable barrels and a takedown system. Included in the G line was the Model G .380, the first centerfire pistol to be marketed by the company. The .22 short caliber GO, or Olympic pistol, was intended as a deluxe competition pistol which featured walnut grips, a heavy barrel, and an aluminum slide.

The 1950s brought a new, larger manufacturing plant at Hamden, Connecticut, as well as a revamped product line. The company's new series of pistols ranged from the "Sport King", an economical "plinker", to the "Supermatic" competition target model, all of which were built on the same frame. This provided the company with a readily identifiable product line, and brisk sales resulted. Not content to sit on its laurels, High Standard once again redefined its product line in 1954 with the introduction of the Model 100 series.

As with the earlier Supermatics, the improved Model 100 pistols ranged in price and quality from inexpensive to competition grades. Subsequent improvements appeared in the later Model 102, Model 103, and Model 104 series pistols. To meet growing competition in the .22 caliber target pistol field from Smith & Wesson's Models 41 and 46, High Standard introduced its "Military" model in 1965. Like the S&W models, the "Military" Model 106 featured a frame that closely resembled the Colt Model 1911 pistol in both feel and weight. The "slant grip" Model 104 series pistols continued to be made. High Standard also produced a series of .22 caliber derringers and revolvers, as well as semi-automatic, pump, and bolt-action rifles chambered in .22, .270 Winchester, and .30-06 calibers, and sporting and police semi-auto and pump shotguns in a variety of gauges. The firm also manufactured a line of commemorative black powder pistols during the Bicentennial period.

In 1968, High Standard was sold to the Leisure Group, Inc., and production facilities were relocated to East Hartford, Connecticut in 1977. High Standard ceased operations in 1984, but in 1993, a new High Standard Manufacturing Co. was founded in Houston, Texas. This firm continues to produce .22 caliber semi-auto pistols of the same design as those manufactured by the original company.