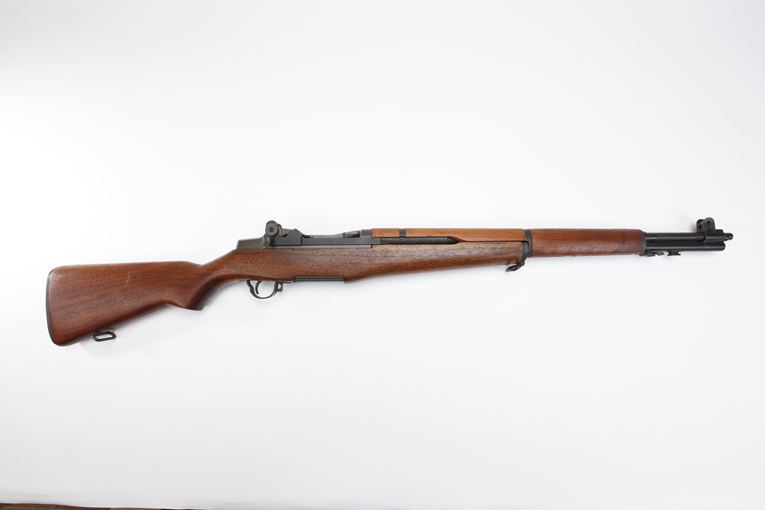 Military and civilian armorers have succeeded in crafting the semi-automatic M1 battle rifle into an equally effective match arm for competitive shooters. This example was originally produced in1945 before being reworked into a National Match rifle. Improved accuracy is achieved through glass bedding of the receiver and by use of selected parts. Barrel straightness and bore diameter are closely controlled and checked in match-grade rifles. Approximately 3600 National Match M1 rifles were produced between 1953 and 1963.


John Cantius Garand was born on New Year's Day, 1888 in St. Remi, Quebec, Canada. After spending his early years in Canada, he moved with his family to Connecticut. Showing great mechanical aptitude from an early age, he designed and patented a screw jack at the age of 14; by his nineteenth birthday, Garand was working as a machinist. As his career progressed, he gained experience in tool and gauge making and design. Garand was also an accomplished marksman. On one occasion, it is said that he spent over $100 in a single day at the shooting galleries of Coney Island. During the First World War, Garand took a job in a micrometer factory in New York City. While employed there, he came up with a design for a machine gun and submitted it to the U.S. government.

As a result, he was hired as a designer by the Bureau of Standards, where his work with machine guns continued. Garand's design employed a mechanism in which the primer moved slightly rearward on firing with enough force to unlock the bolt. Army Ordnance officials were sufficiently impressed with the young man's work that in 1919, he was transferred to Springfield Armory at an annual salary of $3,500. With the success of John Browning-designed machine guns, the Army saw no need for a similar arm. Instead, Garand was tasked with developing a semi-automatic rifle based on his machine gun design.

The Marine Corps followed suit in November, 1941, based at least in part on the rifle's favorable performance on Guadalcanal. Garand's original design was not without its share of problems. Most notable among these was a load failure with the seventh cartridge contained in the 8-round en bloc clip, a tendency to eject the clip with one round remaining, and an operating rod malfunction caused by prolonged exposure to rain. All of these were solved through minor improvements prior to the outbreak of the Second World War.

Original production M1s utilized a gas-trap actuator. This was changed to a gas-port system in 1940. Eventually, these early production rifles were converted to the new system during normal ordnance maintenance and rebuild cycles, but some did see service in the Philippines during the early days of the war. Other changes included the use of a compartment in the buttstock for storage of cleaning supplies, and improved sights. M1 variants include the M1C and M1D sniper rifles. Initial production was limited to Springfield Armory, and by the end of the war, nearly three and one-half million M1s had been produced in its shops. By mid-1943, Springfield's output topped 4,000 rifles each day. Winchester Repeating Arms accounted for over 500,000 more. With the conclusion of hostilities, Winchester's M1 production lines were shut down, and Springfield concentrated on rebuilding surviving service rifles. Production resumed during the Korean War, when nearly one million M1s were manufactured by Springfield Armory, Harrington & Richardson, and International Harvester. Production of the M1 ended in 1957.

The United States was the only nation to issue a semi-automatic rifle as a standard infantry arm during the Second World War, and the Garand's firepower proved to be a decisive factor in combat. The M1 proved to be rugged, dependable, and accurate, and it was also easy to strip and maintain in the field. M1s saw service in all theaters of the war and in extreme climates from the deserts of North Africa and the jungles of the Pacific to the frozen forests of Belgium and Germany.

Over the following year, buildings were rented or erected for use as barracks and storehouses. In addition to ordnance stores, the depot at Springfield also handled other aspects of army supply, including equipment, uniforms, tents, food, and fuel. The end of the War for Independence also brought a decline in military activities at Springfield. In 1794, an Act of Congress directed that national armories be established for the fabrication of small arms. President Washington selected Springfield and Harpers Ferry, which was then located in Virginia, as the sites for these facilities. In addition to the advantages that contributed to the presence of a Revolutionary War depot in the town, many skilled armory workers were still living nearby. The government acquired nearly 300 acres and constructed a dam to furnish power to the armory complex, as well as shops, offices, and storehouses. The first permanent structure to be constructed on the site was a brick powder magazine, which was torn down in 1842.

Additional buildings have been constructed as necessary over the years since. Production of arms at Springfield began in 1795, with 245 muskets manufactured during that year, and approximately 80,000 were turned out before production was discontinued in 1814. The Model 1795 muskets were the first standardized U.S. martial arms to be produced and were patterned after the French Model 1763 Charleville musket. Harpers Ferry Armory also produced a Model 1795 musket, but these were distinctly different from those manufactured at Springfield. The first known Springfield Armory-marked specimens were manufactured in 1799, and feature dated lockplates which bear an eagle stamp and the word "Springfield." The Model 1816 was first standardized U.S. martial arm to be manufactured at both Springfield and Harpers Ferry.

These were the last muzzle loading, paper cartridge percussion arms to be produced by the U.S. Erskine S. Allin, Springfield's Master Armorer, designed a method for converting many of these into metallic cartridge breech loaders. This conversion consisted of a modification to the breech to permit the installation of a "trap door" breechblock with a self-contained firing pin. The famous .45-70 government caliber "trap door" Springfield rifles and carbines of the Plains Indian Wars were based on Allin's work, and these accounted for much of the Armory's production during the 1870s and 1880s.

Over one million were manufactured before production was discontinued in 1941, and many of these, as well as rebuilt or contract model Ô03s, saw action in both World Wars. Prior to the First World War, Springfield also manufactured the M1911 .45 caliber semi-automatic pistol under license from Colt, and throughout this period, Armory workers continued to experiment with, produce, test, and maintain various other ordnance materiel including rifles, pistols, machine guns, and related equipment. During the interwar years, John Garand, a Canadian-born design engineer and Springfield Armory employee, worked on a design for a new gas-operated semi-automatic rifle. After overcoming several problems, both with his designs and with Army brass, the U.S. Rifle .30 caliber M1 was adopted by the Army in 1936.

The Marine Corps followed suit, and during the Second World War, over three and one-half million M1s were produced at Springfield. An additional 500,000 were manufactured by Winchester Repeating Arms Co. This rifle, which General George S. Patton called, "the greatest battle implement ever devised," gave American troops a significant edge over their German and Japanese enemies, most of whom were still equipped with bolt-action arms. After the war, Springfield ceased manufacture of the M1 and turned its efforts to the overhaul and long-term storage of these rifles. The outbreak of war in Korea in 1950 caused a resumption in production at the Armory, as well as by International Harvester and Harrington & Richardson. The return of peace brought a second and final discontinuation of M1 production.

Springfield Armory's continuing efforts at advancing military rifle designs yielded a series of improvements to the M1, culminating in production of the 7.62mm NATO caliber selective-fire M14 rifle, which replaced the Garand in the Army's inventory. In 1968, the Ordnance Department ceased operations at Springfield Armory. The Armory grounds, buildings, and museum, with its extensive arms and accouterments collection, have become Springfield Armory National Historic Site and are now maintained by the National Park Service.