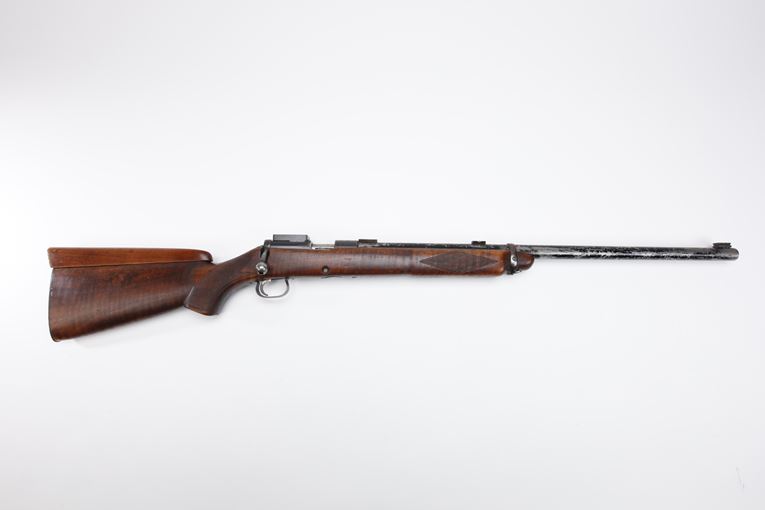 In 1857, financial problems forced Volcanic into insolvency. The company's assets were purchased by Oliver Winchester, who by this time had become Volcanic's president. Winchester reorganized the firm and resumed operations under the name of New Haven Arms Company. Unlike others in the field of firearms manufacture during this period, Winchester's talents lay not as an inventor but as a successful businessman.

This success would continue with New Haven, and it extended beyond financial matters to the staffing of the new company. Among those hired by Oliver Winchester was B. Tyler Henry, who became plant manager. Henry had a great deal of experience with repeating firearms, having worked previously for various arms makers, including Smith & Wesson. One of his tasks was to develop a metallic cartridge to replace the inferior self-contained bullets chambered by the Volcanic. Others, including Daniel Wesson, were also working on this problem, and Wesson's .22 rimfire cartridge may have influenced Henry's efforts.

By 1860, Henry had developed a .44 rimfire, and he then turned his efforts to modifying the Volcanic to load, fire, and extract his new cartridge. His subsequent patent for these improvements was assigned to the New Haven Arms Co. The firm abandoned its pistol line and concentrated its efforts on the manufacture of lever-action rifles of Henry's design which also bore his name. The coming of the Civil War brought with it a great demand for firearms. Although the Henry, with its sixteen-shot tubular magazine and impressive rate of fire was a truly revolutionary rifle, conservative elements within the U.S. Army favored the tried-and-true single-shot muzzle loading rifle-muskets as a standard infantry arm. The government did place orders for a total of over 1,700 Henry rifles, and many of these were issued to troopers of the 1st Maine and 1st District of Columbia Cavalry regiments. Many more found their way into the ranks through private purchase. These rifles provided Union troops with a formidable advantage over their enemies. At least one awed Confederate referred to the Henry as "that damned Yankee rifle that can be loaded on Sunday and fired all week!"

The Model 1894 alone accounted for over five million sales and is still in production. Winchester was able to enter the military market in later years, with sales both to foreign governments and to the U.S. Army. During both World Wars, Winchester-manufactured rifles and shotguns served U.S. and Allied troops in various parts of the globe. In addition to contract production of the U.S. Model 1917 bolt-action and the famous M1 Garand semi-automatic rifles, Winchester also produced the Model 1897 and Model 12 slide-action shotguns, as well as the M1 Carbine. In the civilian market, the bolt-action Model 70 rifle is still popular with big game hunters, and Winchester lever-action rifles continue to meet with sales success.