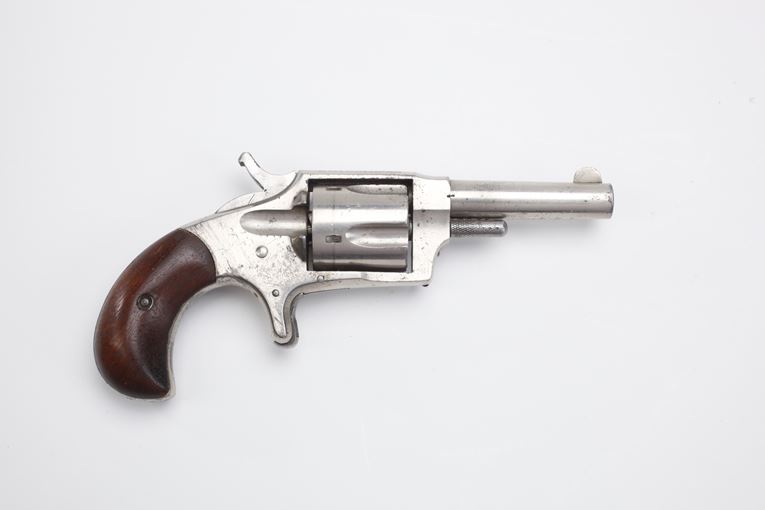 
Hopkins & Allen Manufacturing Co. of Norwich, Connecticut, was a major manufacturer of rifles, shotguns, and inexpensive cartridge handguns between 1868 and 1915. Hopkins & Allen purchased the assets of the Bacon Manufacturing Company when that firm ceased operations in 1868, a victim of declining government arms purchases after the end of the Civil War. Bacon employees Colonel Charles A. Converse and Samuel S. Hopkins, charged with carrying out the sale of their company, found that the post-war recession made the sale of the firm as difficult as it had been to find buyers for Bacon firearms. Instead, they recruited Horace A. Briggs, Bacon Manufacturing's owner, as well as Samuel Hopkins' brother Charles, and Charles H. Allen as business partners.

After an investment of $1000 each, the new company, Hopkins & Allen Manufacturing Co., began operations as a producer of firearms, machinery, tools, and hardware. Officers included the initial investors-stockholders, with Briggs serving as president, Charles Hopkins as secretary, Converse as treasurer, and Samuel Hopkins and Charles Allen, directors. Shortly after the establishment of the company, Henry H. Hopkins, elder brother of Charles and Samuel, became superintendent of Hopkins & Allen, a position which he held for nearly a decade. As were those of Bacon Manufacturing, Hopkins & Allen's production facilities were located in Norwich. With a workforce of 30, H & A began to turn out five-shot .31 caliber percussion revolvers that were essentially identical to those previously manufactured by Bacon.

The firm was initially prohibited from manufacturing cartridge revolvers using Rollin White's patent for bored-through cylinders, on which Smith & Wesson held exclusive rights. After the expiration of this patent, Hopkins & Allen began converting their percussion revolvers to accept cartridge ammunition. In addition, a line of spur-trigger cartridge revolvers in .22 rimfire and .32 rimfire calibers was introduced. Many of Hopkins & Allen revolvers were sold to distributors under trade names including Blue Jacket, Mountain Eagle, Ranger, and others.

The 1870s brought a period of expansion for H & A. It also marked the beginning of an association between Hopkins & Allen and Merwin-Hulbert & Co. Merwin-Hulbert became H & A's sales representative in 1871, and ties between the two companies were strengthened in 1874, when Charles A. Converse elected to leave the business, selling his shares to Merwin-Hulbert. By mid-decade, H & A had begun to manufacture Merwin-Hulbert Automatic Revolvers under the supervision of Joseph Merwin. In addition to overseeing production, Merwin continued his experimentation with new designs in a section of the Hopkins & Allen plant.

By the late 1870s, Hopkins & Allen's sales had grown to the point that the company relocated to larger facilities in Norwich. H & A's product line also expanded to include the XL Army, XL Navy, and XL police models. These larger six-shot revolvers were available in .44-40 centerfire, .44 rimfire, and .38 rimfire calibers and featured barrel lengths of 4 ? to 7 ? inches. After purchasing Bay State Arms Company in 1878, Hopkins & Allen began production of falling block rifles and tip-up shotguns. The acquisition of Bay State brought with it William H. Davenport's patent for the production of high quality rifle barrels. William Davenport, Bay State's founder, remained with Hopkins & Allen until 1890, when he formed the W. H. Davenport Firearms Company.

By 1907, Davenport's fortunes were in decline, and Hopkins & Allen purchased this firm as well. In 1896, Merwin, Hulbert & Co. failed, sending shockwaves through H & A. The Norwich armsmaker suffered a $90,000 loss, a small percentage of which was later recovered in bankruptcy proceedings. In addition, Hopkins & Allen was left without an outlet for sales and customer relations.

The company struggled to remain in business until 1898, when new management elected new officers and reorganized the firm as the Hopkins & Allen Arms Company of Norwich, Connecticut. The Hopkins brothers and Charles Allen continued, but their ownership stake had been reduced to 15 percent. In addition to their line of pistols, rifles, and shotguns, H & A had also manufactured tools and bicycles, but the firm's new management dropped these products and focused solely on firearms production. Less successful firearms, including some medium-frame rifles and all Merwin-Hulbert pistols were dropped as well. By the turn of the century, Hopkins & Allen was again profitable, and the company's products included single-shot shotguns and rifles, as well as a variety of revolvers. The company's return to profitability was not uneventful.

In the early hours of February 4, 1900, a fire of undetermined origin swept through the Hopkins & Allen factory, destroying the factory and most of its contents, including machinery, blueprints, records, parts, and completed firearms that had been awaiting shipment. H & A management began to salvage what they could while plans to rebuild the ravaged factory were prepared. By stroke of luck or fate, the Forehand Firearms Company of Worcester, Massachusetts was offered for sale by heirs of Sullivan Forehand, and Hopkins & Allen agreed to purchase the firm.

In addition to its firearms line, Forehand's manufacturing facilities included machinery and tools that were in excellent condition. H & A's production was consolidated with that of Forehand & Wadsworth at the latter's factory until the Hopkins & Allen plant could be rebuilt. As sections of the new H & A factory were completed, Forehand's machinery was transported from Worcester to Norwich during the night and set up in time for the next day's production to resume. In this way, the company was able to remain in business until H & A's new facilities were completed in 1902.

From its meager beginnings, Hopkins & Allen had grown from a small shop with 30 employees to a major producer of firearms and employer of 600 workers in a new multi-story factory. In a state known for firearms production, H & A. ranked third behind Colt and Winchester. Hopkins & Allen continued to manufacture a variety of revolvers and small arms until 1915, when commercial production ended and the company began to manufacture Mauser Model 1898 rifles for the government of Belgium. Rising costs forced the company into bankruptcy in 1917, and the U.S. Army Ordnance Department and Marlin Firearms took over H & A's factory for the production of Browning Automatic Rifles. Marlin purchased the assets of Hopkins & Allen in 1921.