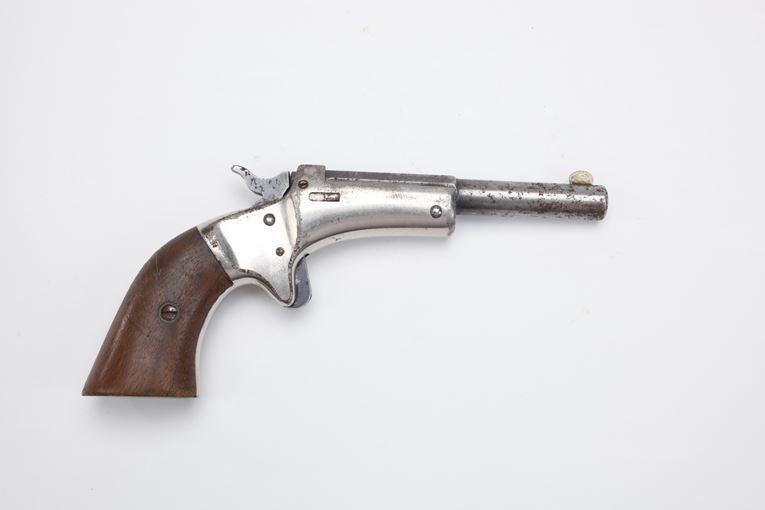 
Stevens Arms Company, well known for its Tip-up Pistols, Boy's Rifles, and Ideal Target and Sporting Rifles, got its start at Chicopee Falls, Massachusetts in 1864. Founder Joshua Stevens was a New England toolmaker who had gained experience in firearms manufacture while employed at various times by C. B. Allen, Eli Whitney, Samuel Colt, and Edwin Wesson. While employed as production superintendent for the Chicopee Falls-based Massachusetts Arms Co., he filed a successful patent claim for improvements to percussion pistols produced by this firm. Stevens received a patent for a tip-up pistol design during the same year in which he, along with financial backers W. B. Fay and James Taylor, founded the company that bore his name. Although a producer of firearms, J. Stevens and Company's primary source of income was derived through the manufacture and sale of machine tools.

The company's early years were lean ones, with production carried out in a former Chicopee Falls grist mill by fewer than 60 employees. J. Stevens and Co. underwent an expansion in 1880, and in 1886, the firm changed its name to J. Stevens Arms & Tool Co. The original partners continued to hold principle ownership in the company, even though they had dissolved their partnership agreement. Ten years later, J. Stevens bookkeeper I. M. Page bought out the shares of both Joshua Stevens and James Taylor, thus becoming the firm's president and majority owner. Under Page's leadership, the Stevens Arms and Tool Company underwent a period of rapid expansion.

Manufacturing facilities and payroll grew significantly, with factory space doubling between 1895 and 1898, and the number of employees increased to 150 during the same period. Shortly after the dawn of the new century, the firm, which now employed over 900 workers in a 270,000 square-feet manufacturing plant, claimed to be the largest producer of sporting arms in the world.

In 1901, Stevens Arms & Tool Co. purchased the Cataract Tool & Optical Company of Buffalo, New York. After relocating this new acquisition to Chicopee Falls, Stevens began to produce its own line of telescopic rifle and pistol sights. Stevens scopes included integral eyepieces and crosshairs that were sealed in solid dust- and moisture-proof brass tubes. This concept marked a major advance in optical sights, as previous designs employed a separate eyepiece that was fastened to the scope tube with several screws. Stevens scopes also required no focus adjustment, as did the products of competing firms. Optical sights continued to be a part of the Stevens line until the First World War, when the company sold its interests to Lyman Gun Sight Company of Middlefield, Connecticut. As Stevens Arms and Tool Co. continued its phenomenal growth, firearms replaced machine tools as a revenue source.

By 1915, Stevens Arms was a leading manufacturer of smallbore target and hunting arms. The firm established offices in both New York and London, as well as on the European continent, in Australia, the Caribbean, and Latin America. The original Stevens line of spur trigger tip-up single-shot pistols, tip-up rifles, and "pocket rifles" gave way to offhand target pistols and the highly-regarded Ideal rifle. These lever-action single-shot falling block rifles were available in a variety of chamberings ranging from .22 rimfire to .44-40 caliber. Options included both round and half-round/half octagonal blued barrels; casehardened actions; checkered deluxe- and select-grade walnut butt stocks and fore ends; shotgun, crescent, and Schuetzen-style butts available with or without a cheek piece and/or pistol grip; double-set triggers; palm rest; Globe interchangeable front sight; and Vernier tang rear peep sight. The single-shot Ideal "Walnut Hill" No. 49 rifle represented the pinnacle of Stevens Arms products.

In addition to its deluxe features, Walnut Hill rifles also established a reputation for accuracy, and this combination ensured the success of this design for over fifty years. Original models sometimes sell for several thousand dollars in the current collectibles market.

Between 1901 and 1903, Stevens rifles were available with special eight-groove barrels produced under the supervision of master barrelmaker Harry M. Pope. Some Stevens-Pope barrels were also made for the U.S. Army's Krag rifle. The Stevens-Pope agreement covered a period of five years, but a series of disagreements between the parties caused Pope to sever his relationship with Stevens Arms in 1903.

Rifles featuring Pope barrels and bearing the "Stevens-Pope" stamp on the barrel top bring a premium among shooters and collectors. Stevens is perhaps best known for their popular line of smallbore caliber rifles. The 4 ?-pound Stevens Favorite featured interchangeable breech blocks and blued barrels, as well as a casehardened receiver and walnut stocks. Options included tang rear sights and deluxe checkered wood. The Favorite was sold in both Boys' and Ladies' Models. The Sure Shot, Crack Shot, Little Scout, Marksman, and Junior rifles represented less-expensive entries in the Stevens product line, and the company also produced both pump and lever-action repeating rifles, and even shotguns.

In 1920, J. Stevens Arms Co. became a wholly-owned subsidiary of Savage Arms Corporation when it was acquired by the Utica arms maker. Under Savage ownership, the Stevens line grew to include bolt-action long arms. Parent company Savage relocated its operations from Utica, New York to Westfield, Massachusetts in 1960, at which time the Stevens Arms factory in Chicopee Falls closed. Even though Stevens Arms has seen many changes over its history, the company's name has survived, continuing in use up to the present day. For a long period, the Stevens name was all that remained of the New England firm, however, this situation changed in 1999, when Savage Arms once again began to produce the Stevens Favorite Rifle under the designation Model 30G.