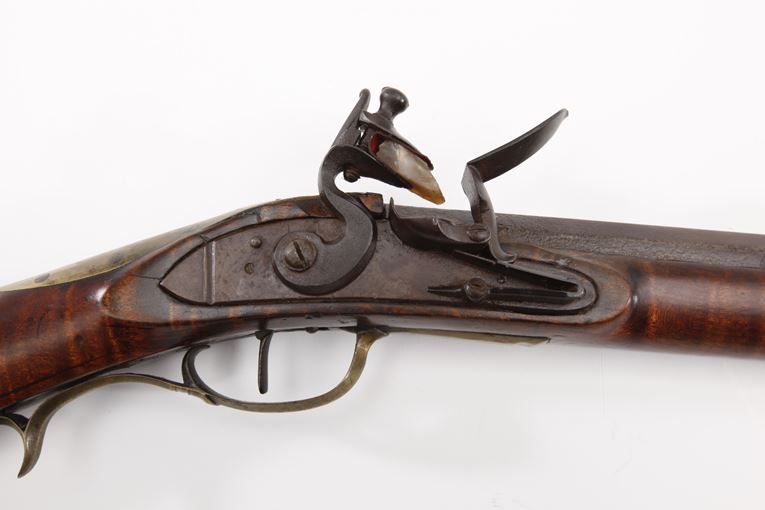 The patriotic engravings on this rifle's patchbox are an unusual feature on a civilian firearm.


Circa 1780 Mathias Miller (U.S.) Flint-lock Kentucky Long Rifle" (single-shot/ muzzle-loading/ black powder/ ball ammunition) This specimen is credited to Mathias Miller of Easton, Pennsylvania. Despite their place of origin, long rifles were often named after what was then a hilly wilderness area called "Kentucky." Sharp-shooting long rifles evolved from short Jaegers because Kentucky's terrain and game were different. Long rifles were most effectively employed in the later stages of the Revolution by colonial militia serving under General Nathanael Greene in Piedmont areas where there was ample open space for sniping. Long rifles were slow to load, but accurate at ranges beyond 150 yards. In contrast, the smooth-bore "Brown Bess" muskets used by British troops were quick to load, but were not effective at ranges greater than 80 yards. This long rifle has a patch box cover embossed with an abstract American eagle and a flag with stars and stripes." --Dr. William L. Roberts, THE AMERICAN LIBERTY COLLECTION; #26