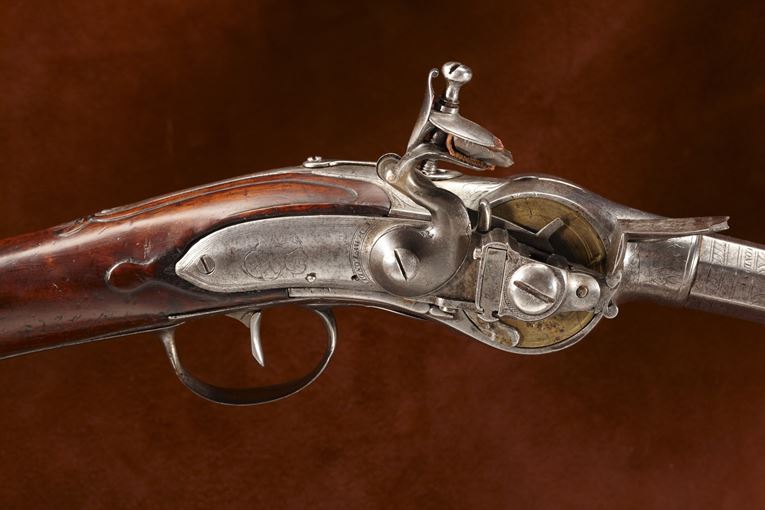 John Shaw's tastefully decorated carbine has light engraving on the steel buttplate, lockplate, rear of the barrel and frame. The gun is a smoothbore with a 21 3/4" barrel bearing no proofmarks. Powder and ball were dispensed from buttstock reservoirs to the chamber by rotating a side lever. Balls are loaded through an opening in the top of the frame after first pushing a ring cover aside. The powder magazine is made to blow open if the powder should accidentally ignite.


The Cookson flintlock rifle, a lever-action breech-loading repeater, is one of many similar designs to make an appearance on the world stage beginning in the 17th century. The revolutionary mechanism at the heart of the Cookson repeater dates from 1680 and was originally known in Europe as the Lorenzoni System, named for Italian gunsmith Michele Lorenzoni of Florence. Long arms utilizing this system were produced in other European nations and in the United States until about 1849. The Cookson rifle dates from 1750 and features a two-chamber horizontally-mounted rotating drum. Loading was accomplished by lowering a lever which was mounted on the left side of the rifle. This caused the chambers to line up with two magazines contained within the buttstock and allowed one .55 caliber lead ball and a 60-grain powder charge to fall into their respective chambers. When the lever was returned to its original position, the ball dropped into the chamber, and the powder charge lined up behind it. At the same time, the hammer was cocked, the pan was primed, and the frizzen was lowered. After firing the rifle, the process could be repeated until the two magazines, with their seven-shot capacities, were empty. Although other breech loading rifles were introduced in later years, the Cookson-type long arms were unique in their ability to fire multiple shots without reloading. This feature would later become widespread, but for a time, these repeaters represented the pinnacle in firearms development.