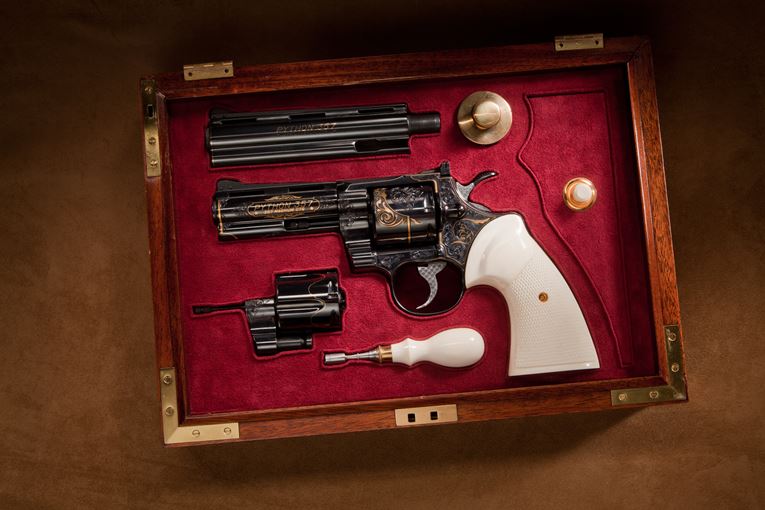 Engraved with spare cylinder and barrel.


The Python is the Rolls-Royce of Colt revolvers. The shrouded, weighted and ventilated rib barrel, .357 Magnum caliber, royal blue finish, and overall top quality set the model apart from the products of any other U.S. gunmaker. It began production in 1955.

The revolver features precision adjustable sights, a smooth trigger, solid construction and extra metal. Pythons have a distinct appearance due to a full barrel underlug, ventilated rib and adjustable sights. Originally, Colt manufactured Pythons with hollow underlugs but left them solid to work as a stabilizing barrel weight. When the revolver is at full cock, just as the trigger is pressed, the cylinder locks up for the duration of the hammer strike. Other revolvers have a hint of looseness even at full-cock. The gap between the cylinder and forcing cone is very tight, further aiding accuracy and velocity. Each Python revolver was boresighted at the factory with a laser and was the first mass-produced revolver to do so. Colt Manufacturing Co. announced the termination of its production of Python revolvers in October 1999 due to lack of sales and rising production costs.The Colt Custom Gun Shop continued making a limited number of Pythons on special order until 2005, when even this limited production was terminated.