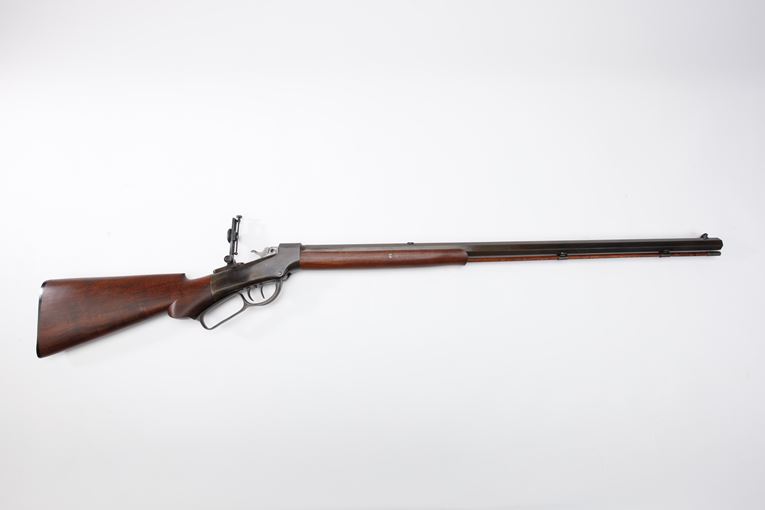 Ballard's single-shot rifles were available in several sporting models and in various calibers. The No. 5 Pacific Rifle was made c. 1876-1891. SN 3824

Ballard was a popular name in guns during the late nineteenth century. Manufactured by Marlin Firearms Co., of New Haven, Connecticut, their basic configurations offered such a large variety of sights, stocks, levers, barrels, ect., that they came close to being custom" guns. Introduced around 1885, single-shot Ballards could be used for hunting, target shooting, or self-protection. Their popularity faded as motor cars enabled people to travel farther and hunt bigger or faster game. By then, repeating arms had become more popular. Still, rugged individualism would remain popular as a role model, and single-shot arms would maintain a place in U.S. sentiment."

The Ballard single-shot rifle was based on U.S. patent 33,631 that was granted to C. H. Ballard of Worcester, Massachusetts on November 5, 1861. Approximately 24,000 sporting and military rifles, carbines, and shotguns were manufactured between 1862 and 1873; Civil War sales account for half of this total. Although purchased for military use, the Ballard rifle's real success came in the hands of sportsmen and competitive shooters. The accuracy of these arms helped them to maintain their popularity into the 20th century, and their demise was due not to any shortcoming; rather, the rise in popularity of repeating rifles and modern high power ammunition spelled the end for Ballard production.

Five different New England companies produced various Ballard designs, with the New York firm of Merwin & Bray acting as sales agents throughout Ballard's brief history. Ballard arms were originally designed for use with rimfire cartridges, but an auxiliary device was patented by Joseph Merwin and Edward P. Bray in 1864 to enable these rifles to be used with percussion primers and combustible cartridges or loose powder and ball. Later versions were produced for use with centerfire ammunition.

Initial examples were produced between 1862 and 1865 by the Worcester firm of Ball and Williams. Approximately 16,000 rifles and carbines were produced during these years. By the midpoint of the war, however, Ball and Williams was unable to keep up with the demand for their product, and Merwin & Bray contracted with the Bridgeport, Conecticut firm of Dwight, Chapin & Co. to provide additional manufacturing facilities for Ballard rifles and carbines. Unable to produce arms that passed government inspection, the firm was forced to forfeit the contract and file for bankruptcy. Ball and Williams took over the remainder of the contract. Undoubtedly, Ballard hoped to achieve some measure of success in government sales, but his design failed to gain widespread military acceptance.

Kentucky was the largest single purchaser of Ballard rifles, and acquistions by the Federal government were limited to approximately 1000 carbines and 35 rifles. Ballard production continued through the end of the war, when Ball and Williams became R. Ball & Co. Ballard rifles took part in Army trials in 1866, but with the exception of the Army's overland expedition to the Pacific, they were not used as a military arm in the post-war period. After manufacturing an additional 2,000 arms, the company was forced to cease operations in 1866 due to declining sales and the completion of government contracts. All assets and machinery were purchased by Edward P. Bray and by the Merrimack Arms and Manufacturing Co. of Newburyport, Massachusetts.

Production continued on a limited basis under the Merrimack banner until 1869, when Brown Manufacturing Co., also of Newburyport, took over production. In the 1870s, C. H. Ballard also designed and produced a single-shot derringer. These .41 caliber rimfire pistols were manufactured in Worcester and featured walnut grips, a bird's head butt, and a brass frame with silver plating. Production was short-lived, however, and only a few thousand examples found their way to the marketplace.

Economic depression came to the United States in 1873, and diminishing sales forced Brown Manufacturing into bankruptcy. All patent rights, equipment, parts inventories, and properties were purchased by New York arms dealers Schoverling and Daly, who handled sales and distribution of Ballard rifles after reaching an agreement with John Marlin to continue production. This partnership would prove to be highly successful for all parties involved.

In 1881, the Marlin Firearms Company was incorporated, and production of Ballard rifles continuing under the Marlin banner until they were eventually discontinued circa 1891 due to the rising popularity of repeating rifles. Ballard rifles enjoyed great popularity during the heyday of the Schuetzen rifle. According to one expert, the Ballard possessed one of the fastest hammer movements ever invented, and these rifles earned a solid reputation for accuracy. When Brown Manufacturing went out of business, many remaining Ballard rifles were purchased by the Boston firm of Williams Read & Sons, who sporterized them for sales on the commercial market.

In addition, many Ballard were either custom-built models or were custom assembled using standardized parts, and features such as adjustable double-set triggers, custom sights, engravings, and high-grade woods were frequently encountered. Many barrel and stockmakers practiced their craft by marrying their products to Ballard actions. Perhaps the most famous of these was Harry M. Pope, who became legendary among competitive shooters for the quality and accuracy of his hand-rifled barrels. When properly handled, Pope guaranteed that these guns would deliver all of their shots into a 2 ?-inch circle at 200 yards.

Ballards were also well-received by competitors in Germany, Great Britain, and France. Although the days of the Scheutzenfest are long past, Ballard products continue to enjoy favor among marksmen. Some are still found in competition today, and modern re-creations of these famous arms are also available. These rifles are also popular outside shooting circles. Ballard and Marlin-Ballard rifles were and are well-known for their accuracy and workmanship, and fancy-grade long-range rifles are eagerly sought after by modern collectors.