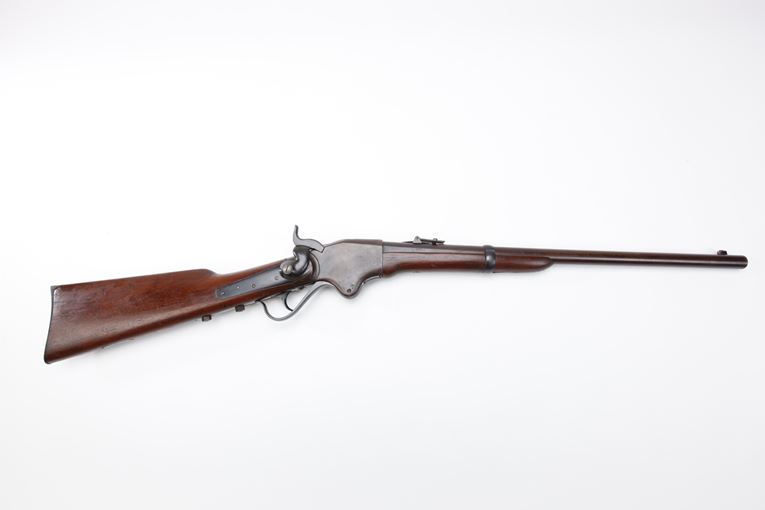 The Spencer Carbine made its appearance during the Civil War, and many of these government-purchased arms were re-issued in the 1870s for service on the frontier. These guns utilized a spring-loaded seven-shot tube magazine that was located in the buttstock. In post-war models, a patented magazine cut-off prevented the breechblock from traveling far enough to the rear to accept a magazine-fed cartridge. This allowed soldiers to load and fire single rounds, with the ammunition contained in the magazine kept in reserve. The serial number on this carbine indicates it was made c.1863-1865 in cal. .52 rimfire (56-56) and converted by Springfield Armory c. 1867-1874 to .50 cal. by sleeving the barrel. SN 50266


Christian Minor Spencer was born in Manchester, Connecticut on June 20, 1833. At age 11, he went to live with his maternal grandfather, Josiah Hollister, a veteran of the Revolutionary War. It was there that young Christian learned the rudiments of wood- and metalworking. By the age of 14, Spencer was apprenticed to the Mount Nebo Silk Manufacturing Co., located in South Manchester, Connecticut. This firm was owned by the Cheney family, one of New England's most enterprising and influential families. After a year, he entered a second apprenticeship, this time with local machinist Samuel Loomis.

Christian renewed his employment with the Cheney family in 1854 when, at the age of 22, he became superintendent of his benefactor's new silk ribbon manufactory in Hartford. During this period, Spencer designed and patented a machine to attach labels to spools, thus allowing one shop girl to do the work of three. The Cheneys paid Spencer a $25 royalty on every machine he produced. Although working 11 hour days six days per week, Spencer began to experiment with an idea for a breech-loading repeating firearm. By 1859, with the encouragement of both his father and the Cheneys, he had perfected a lever-action rolling block rifle design, and on March 6, 1860, he was awarded a U.S. patent for his work. With financial backing from his father, Ogden Spencer, a prosperous wool merchant, Christian was able to secure the services of Luke Wheelock, an experienced gunsmith, for the production of prototype firearms. Spencer also befriended Richard S. Lawrence, then superintendent of the Sharps Rifle Manufacturing Company, and this association most likely influenced certain aspects of Spencer's design.

By the spring of 1861, civil war had come to America, and the Cheney family entered into a contract with Spencer in which all rights and patents for Spencer's rifle design would be assigned to them. In return, Spencer would receive a royalty of $1 for every rifle produced. This was later lowered to 50 cents for each military arm produced. The Cheneys had long been friends of Gideon Welles, Secretary of the Navy in Abraham Lincoln's administration, and this gave them, and Spencer's rifle, access to government officials in Washington. At this time, Spencer also contracted with Connecticut ammunition makers Crittenden & Tibbals for the manufacture of a .56 caliber rimfire metallic cartridge for use in his rifle. In its final form, the Spencer rifle employed a spring-loaded seven-shot tubular magazine which was located in the buttstock, and a lever-action which, when operated, ejected a spent cartridge and chambered a fresh one. Manual cocking of the hammer then readied the rifle for firing.

The stage was now set for Spencer's rise to fame. Through the patronage of Secretary Welles, Spencer's rifle was successfully tested by the Navy, resulting in the purchase of 1,000 guns. Army trials followed in the spring of 1862, and this resulted in the sale of an additional 10,000 guns. In addition, President Abraham Lincoln also took part in a demonstration of the Spencer, firing seven shots at a target forty yards away. This demonstration took place on the Mall, near the site of the Washington Monument, and resulted in Lincoln's personal endorsement of the arm. Spencer now had contracts but no manufacturing facilities. Once again, the Cheney family would prove to be indispensable to Spencer, as Charles Cheney rented a portion of a piano factory in Boston for production of Spencer firearms.

After several delays, the first shipment of Spencer carbines was delivered on December 31, 1862. Both Army and Navy placed additional orders during the summer of 1863, and many other Spencer arms were purchased privately. By the end of the war, more than 144,000 Spencer rifles and carbines had been manufactured; over two-thirds were purchased by the U.S. government. To keep up with demand, Spencer subcontracted some production to the Burnside Rifle Co. of Providence, Rhode Island.

Spencer rifles and carbines met with high praise from those who were equipped with them, and with respect from those who faced them in battle. In its first combat test, Spencer-armed Union troops under the command of Colonel John Wilder earned the nickname "Lightning Brigade" when they defeated a numerically superior Confederate force at the Battle of Hoover's Gap, Tennessee on June 24, 1863. One week later, Spencer rifles again saw action in the hands of troopers of the 5th Michigan Cavalry Regiment of General George Armstrong Custer's Brigade at the Battle of Gettysburg. Wilder's troops were called on again at the Battle of Chickamauga in September, 1863, when they fought to hold the Union center in the face of determined attacks by General James Longstreet's Confederates.

Spencer rifles and carbines also saw service with several other Union infantry and cavalry regiments. Although the South lacked the capacity to manufacture metallic cartridges used by the Spencer, captured arms and ammunition saw service with troops under the command of Colonel John Mosby, the famed "Gray Ghost of the Confederacy," as well as with other units and individuals.

Later Spencers, beginning with the Model 1865, were equipped with a cut-off mechanism invented by Edward Stabler which, when engaged, prevented the breechblock from moving far enough to chamber a cartridge from the buttstock magazine. This device permitted the Spencer to be used as a single-shot arm, with a full magazine held in reserve. Spencer carbines continued to serve on the frontier after the Civil War, but the firm's prodigious wartime output contributed to a large post-war surplus.

Declining sales forced the Spencer Repeating Rifle Co. into insolvency, and in October, 1868, all of the company's assets were sold to the Fogerty Rifle Co. of Boston. Within a year, Fogerty's assets were in turn purchased by Oliver Winchester, and Christian Spencer agreed to assign all future repeating rifle designs or improvements to Winchester. Spencer later returned to the firearms industry with the formation of the Spencer Arms Co., which manufactured his design for the first practical pump-action shotgun. This firm was later sold to noted arms dealer Francis Bannerman. Christian Spencer died on January 14, 1922.