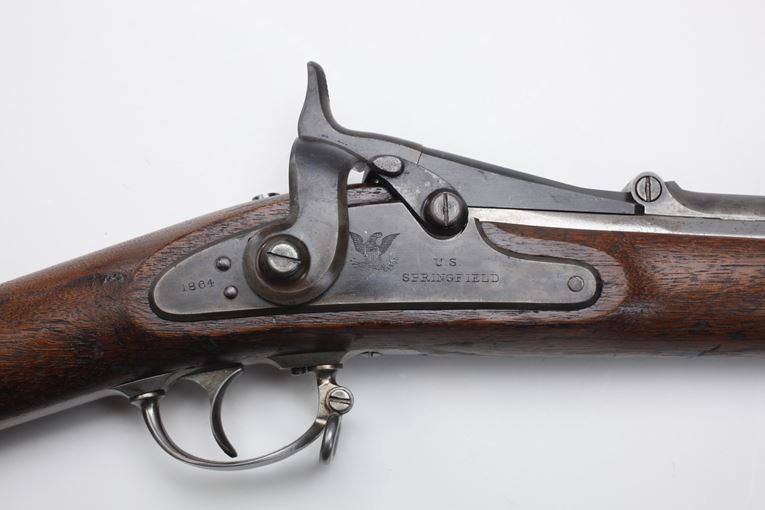 Obsolete rifle-muskets were equipped with metallic cartridge breechblocks and returned to service. SN 3

After the war, old firearms, like old soldiers, began to fade away. Formost among the former were muzzle-loading muskets. The 1865 Allin "Trapdoor" Conversion single-shot represented a new standard for U.S. military armament: breech-loading metallic cartridge rifles. Such arms fired ready-made metal cartridges that were fitted into a chamber at the breech, which was then closed by the hinged "trapdoor" bolt. The arm was now ready to fire, using a metal pin to strike the cartridge primer. These arms introduced an entirely new emphasis in firepower. Even though some were only single-shot, breechloading arms were much faster to reload than muzzle-loaders. Fewer men could fire more rounds in less time."

By the close of the Civil War, muzzle-loading arms were hopelessly outdated. Although the Army had adopted the both the Morse breech-loading conversion system and its center-fire cartridge prior to the Civil War, the outbreak of the War Between the States stopped development and production. With the return of peace, many inventors attempted to sell various patents to the government for the conversion of muskets to breech-loaders. Erskine Allin, Springfield Armory's Master Armorer, had begun developing a breech-loading conversion system for the U.S. Model 1861 Rifle-Musket as early as 1864. His modification involved cutting away the back of the barrel and installing a cam-locked breechblock.

The first of these, termed the Model 1865, or First Allin, were issued early in 1866. Problems soon developed, and resulted in a complete redesign of both the rifle action and its ammunition. The Model 1865's complicated and weak extraction system was replaced by a system of springs, which proved to be far more rugged and reliable than Allin's original design. The new .50-70 center-fire cartridge, developed by Steven Vincent Benet of Frankford Arsenal, represented a vast improvement in metallic cartridge ammunition for U.S. military use and became the Army's first generally issued center-fire round. To facilitate use of the new .50 caliber ammunition, existing .58 caliber musket barrels were bored out and sleeved with a brazed-in steel or wrought iron liner and re-rifled. The new breech-loading musket was heavy, weighing over 10 pounds, but it was very accurate and much more reliable than Allin's earlier design. The issue of these Model 1866 "Second Allin" Springfields caused a minor scandal in Congress.

In 1866, the Laidley Board had been convened to select a new breech-loading rifle for U.S. service. Over a dozen arms had been submitted, including the Remington rolling block and Sharps falling block designs. As it was still under development at the time when the Laidley Board convened, the Springfield Allin Conversion was not represented. The Board eventually recommended the Peabody, a forerunner of the British Martini-Henry, for adoption by the U.S. Army.

When Springfield Armory began issuing a breech-loading arm that had not been presented to the Board, well-connected firearms inventors and their corporate sponsors stormed Washington. A second Board was convened, and after a long investigation, the Springfield-Allin Conversion was formally adopted for Army use. This decision may well have been influenced by the fact that the government would not be required to pay patent royalties on Allin's work.

The Model 1866 Allin rifles first saw action in the fall of 1867 during the "Hayfield Fight" near Fort C. F. Smith in southern Montana, and the "Wagon Box Fight" near Fort Phil Kearny in northern Wyoming. Both of these posts guarded the Bozeman Trail, and these battles pitted the Sioux nations under Chief Red Cloud against small forage parties made up of both soldiers and civilians. The Sioux, expecting to face an enemy armed with obsolete muzzle-loading muskets, were planning to make short work of these bands, just as they had in the Fetterman Massacre of the previous December. It was not to be.

In two separate day-long battles, the mixed parties of soldiers and civilians held their attackers at bay, even though they were outnumbered by as much as 30 to 1. Casualties among the soldiers were surprisingly light. Even though the Model 1866 Springfield-Allin was a major improvement, it was excessively heavy, and it continued to suffer more than its share of extraction problems.

It was soon replaced in front line service by the Springfield Model 1868 "Trapdoor" rifle, but continued to be widely issued to scouts and contract buffalo hunters well into the 1870s. Many of these hunters, including William "Buffalo Bill" Cody, made their reputations not with the Sharps "Big Fifty," but with the Springfield-Allin rifle. At the start of the Franco-Prussian War in 1870, thousands of Second Allins were sold to France. Perhaps more of these rifles saw service in Europe than ever fired a shot in the American West.