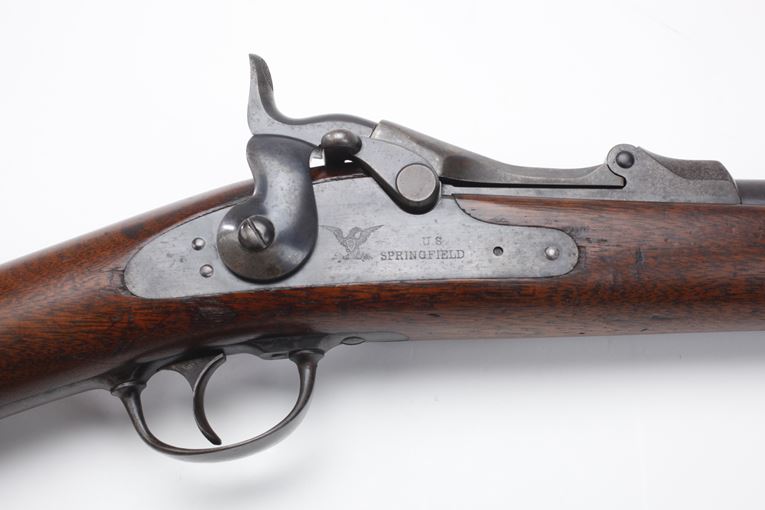 Similar to the carbines carried by General Custer's troopers, this carbine is a single shot arm. Although there is no official designation for the Model 1879, certain features, such as a slightly different breech from those used on earlier models, a notably thicker and wider receiver, as well as its serial number, identify this carbine as one produced between 1879 and 1885. SN 131991

During the Civil War, General George A. Custer led U.S. Cavalry, armed with Spencer repeating carbines, in many charges against Confederate forces. After the war, however, the Army selected new guns. Strangely, single-shot Springfield "trapdoors" prevailed. Custer, who by then was fighting Natives, was continuing to enjoy success with his Spencers. He objected to the single-shot guns, but his argument did not prevail. Later, armed with "trapdoors," Custer, though out-numbered, led his troops in an attack at the Little Big Horn against Natives armed with repeaters. He lost both his command and his life. This specimen attests to Army logic of that period, which thought repeaters to be wasteful of ammunition. Losses such as Custer's eventually convinced U.S. military thinkers that repeating arms should be adopted."

The town of Springfield, Massachusetts, located on the banks of the Connecticut River, was settled in 1636 by emigrants from Roxbury. The town was nearly destroyed during King Philip's War in 1675, but it was quickly rebuilt. As early as 1776, Continental Army colonel and future Secretary of War Henry Knox recommended the establishment of public laboratories, magazines, arsenals and foundries in secure locations for the production and repair of arms, ammunition, and other ordnance stores.