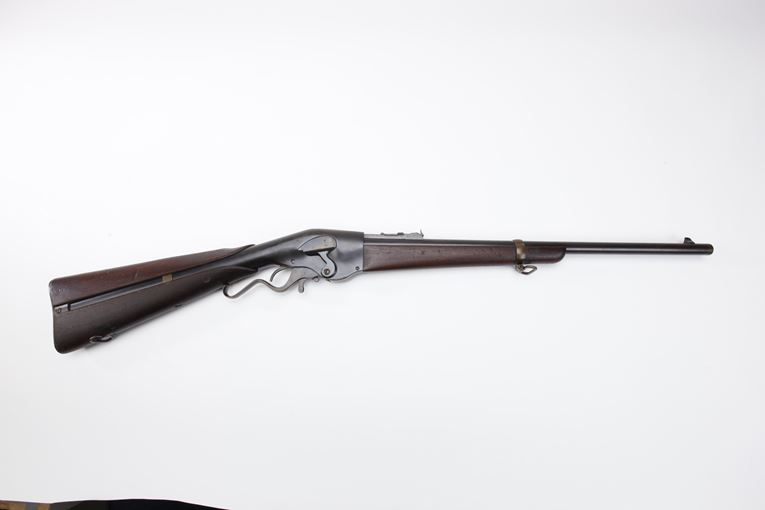 The Evans offered a helical magazine in the buttstock that could hold up to 34 cartridges.

Started in 1877, Warren R. Evans Products were an innovation in design. These moderately expensive and functional guns incorporated a unique helical magazine which, in some models, holds 34 rounds. Their frame is of black pressed sheet metal. Although advanced in design, they were hard to sell because of their unusual appearance. Rarely did anything like them appear again for 100 years, except in the military market.

The Evans lever-action repeating rifle and carbine were revolutionary for their time. Invented by Maine dentist Dr. Warren R. Evans, these arms were quite distinctive in appearance, featuring a walnut buttstock that partially enclosed a unique rotary magazine that contained either 28 or 34 rounds. The magazine operated on the principle of the Archimedean screw and took the form of an enclosed fluted shaft that rotated within a spiral tube. As the shaft rotated, the .44 Evans caliber cartridges were advanced from the loading port in the buttplate to the receiver, without requiring a magazine follower.

Although appearing to be hammerless, Evans' design also featured an underhammer that impacted the firing pin on an upward sweep. The U.S. government issued a patent for an "improvement in magazine guns" in December, 1868, and in September, 1871, Evans received his second patent for "improvements in gun locks." Taken together, these two patents represent a complete firearm design.

In 1872, the U.S. Army announced that it would hold trials to examine and test various breechloading firearms with the intention of adopting a design suitable for use by troops. Although the Evans rifle was fired 38 times in 19 seconds with no misfires, it experienced mechanical difficulties that were sufficient in nature to disqualify it from consideration. Warren was not the only mechanically-inclined member of the Evans family. His younger brother, George Franklin, was a machinist who had previously purchased a manufactory of farm implements in Norway, Maine.

After the failure of his rifle in Army trials, the Evans brothers, together with several Norway businessmen, formed a company in nearby Mechanic Falls to manufacture the Evans rifle for sale on the commercial market. Adna C. Denison, a partner in the new company, provided much of the financial resources, while Warren supplied his patents and George his mechanical skills. In 1873, the Evans Repeating Rifle Company employed 25 machinists, and by early 1874, the first rifles were offered for sale.

Meanwhile, Warren had relocated to Lynn, Massachusetts, where he continued his dentistry practice. During this period, he also received patents from Great Britain, France, Canada, and Belgium. Both Warren and George Evans, as well as Adna T. Denison, Anda C. Denison's son and a partner in the business, agreed to assign all patent rights to the company. Denison later received compensation in the form of both cash and stock, and the Evans brothers were paid royalties of $1.25 per rifle manufactured.

The years 1874 to 1876 saw the production of approximately 500 guns. These "Old Model" Evans rifles may be distinguished from later variants by the absence of a lower buttstock, thus leaving the magazine tube completely exposed on the underside. By 1876, Merwin, Hurlburt & Co. of New York had become sales agents for the Evans company. A catalog issued in that year offered three different Evans models. The Merwin, Hulbert & Co. exhibit at the Centennial Exposition in Philadelphia featured a military musket, a carbine, and a sporting rifle. "Transition Model" rifles manufactured during this period are distinguished by the addition of a walnut lower buttstock. Some "Montreal" transitional carbines were manufactured for sale by Ralph H. Kilby, Evans' Canadian agent.

In 1877, George Evans patented two design modifications for the Evans rifle. These permitted the gun to be loaded from the breech without disturbing cartridges in the magazine, and provided a mechanism for holding the hammer on half-cock. George also received a patent for a system that prevented the movement of the magazine when the breechblock was closed. In addition, he also received a separate patent for a method of forming metal. While not specifically related to the Evans rifle, this process could be used to manufacture parts for these arms. "New Model" arms manufactured between 1877 and 1879 included the George Evans improvements and featured a round-topped frame, redesigned hammer and cocking lever, and a receiver with a squared fore end.

Evans rifles were used by such notables as Kit Carson, Jr. and William F. "Buffalo Bill" Cody. Ornate presentation-grade models were given to various foreign heads of state and military officers. At least one Evans New Model Carbine was engraved by Louis D. Nimschke for presentation to Mexican president Portfirio Diaz. Frank and George W. Freund, known for their work as agents for the Sharps Rifle Company, also sold and perhaps modified Evans rifles.

In addition to U.S. sales, Evans also found markets in South America, and with military forces from both Turkey and Russia. Additional military sales to Russia in the aftermath of the Russo-Turkish War failed to materialize, however. Although Evans rifles were favorably received by many who used them, the company found itself in the unenviable position of competing with Winchester and other manufacturers of lever-action repeaters. Most of Evans' assets were in the form of tools and machinery, while cash reserves were small and debts mounted.

By December 1879, the Evans Repeating Rifle Company was in bankruptcy, and its failure also caused the collapse of Merwin, Hulbert, & Co. and several subsidiaries. After six years of operation which saw the production of over 12,000 rifles and carbines, the assets of the Evans company were liquidated in March 1881. George Evans eventually relocated to Massachusetts, where he continued to patent various mechanical devices until his death in 1901. Warren Evans' association with the company had ended by 1877. He established a dental practice in Portland, Maine, and took up an active interest in local affairs. During this period, he also received patents for inventions related to dentistry.

After a prolonged bout with heart disease, Warren died in Portland on June 8, 1912.