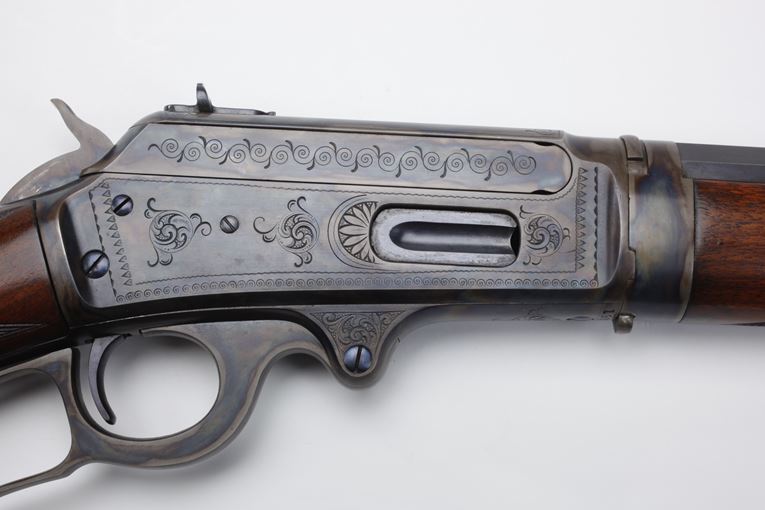 Like Winchester, Marlin offered optional engraving and takedown capability for its rifles. SN 158157. This rifle was manufactured in 1897.

This Marlin is a premier rifle. Being a light-weight take-down type, it has been factory engraved and chambered in special smokeless steel." Thus, it is one of the first U.S. guns to fire smokeless "nitro" powder. This new propellant burns very quickly and leaves little residue. Such attributes would prove to be very advantageous to shooters, particularly in combat situations. John Marlin, a major firearms maker, worked for Colt Firearms Co. at Hartford, Connecticut before launching his own business in New Haven. By 1873 he was able to manufacture Ballard arms for Charles Daly, who had obtained patent rights. With growth, Marlin Firearms Co. was reorganized in 1881. It has devoted itself, mostly, to sporting arms ever since."

John Mahlon Marlin was born on May 6, 1836 near Windsor Locks, Connecticut. At the age of 18, he became an apprentice machinist with the American Machine Works. He later served as a machinist with Colt Patent Firearms of Hartford. In 1863, he started his own pistol manufacturing business in New Haven, concentrating on production of a small single-shot .22 caliber deringer.