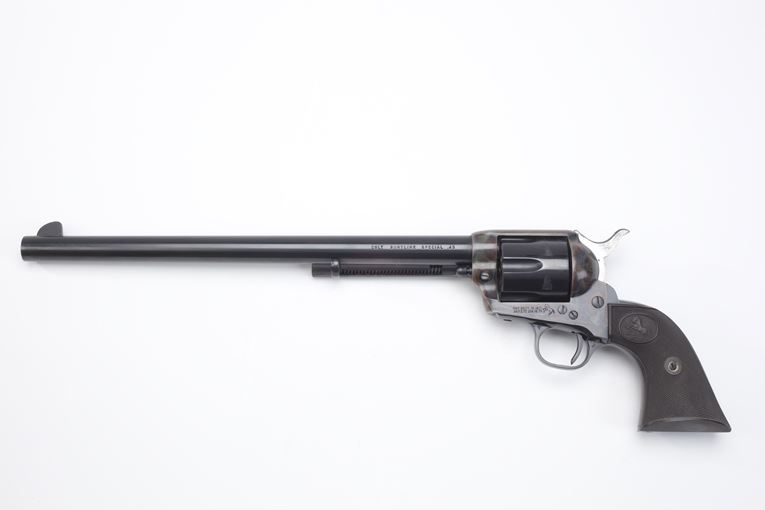 
The single word "Buntline" describes a type of revolver that would normally take a sentence or two to depict; that is its major and possibly its only virtue. It is a word that shooters and collectors have come to associate with long-barrel Colt Single-Action Army revolvers or their smaller brother, the Colt cal. .22 Scout model.

In 1931, Stuart N. Lake published a thriller titled "Wyatt Earp - Frontier Marshal." This is generally believed to be the source of the yarn that Ned Buntline, author of some 400 lurid paperback "dime" novels, was so appreciative for Wild West stories provided by Earp, Bat Masterson, Bill Tilghman, and several others that he obtained from the Colt factory special cal. .45 single-action Colt revolvers with barrels "a foot long" for which "each gun had a demountable walnut rifle stock."

As the story goes, the name "NED" was carved in the stock of each revolver and they were presented to the lawmen at Dodge City in 1875. In the extensive research done for the "The Peacemaker and Its Rivals," by John E. Parsons, there was no record of any revolver ever leaving the Colt factory with a "foot-long" barrel. The records showed only about 40 guns with barrels longer than 7 1/2", and these were made up in the 1877-1890 period; calibers were .32-20, .38-40, 44-40, .45 and .476. The attachable stocks for these pistols were not solid "walnut rifle stocks" but metal skeleton stocks.