Jennings Rifle: Predecessor of the Winchester 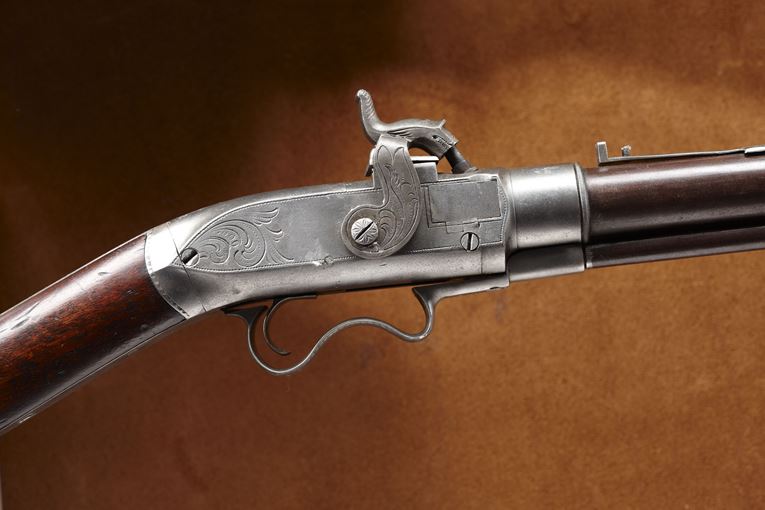 The Jennings is essentially the "great-grandfather" of the Winchester Rifle. An improvement on the earlier Hunt Repeater, these arms were manufactured by Robbins & Lawrence of Windsor, Vermont. The Jennings Rifle also marked the association of B. Tyler Henry, Horace Smith, and Daniel Wesson, all of whom would later contribute to the design of the Volcanic Lever-Action Pistol and Carbine. These arms, as well as the Henry Rifle, were direct forerunners to the Winchester. This Jennings muzzleloader was manufactured in 1852 with parts from an unsuccessful breechloading rifle design.

Nicanor Kendall sold his interest in the company and moved to Iowa, while his former partners expanded the business. Aside from an unsuccessful venture into railroad car production, Robbins & Lawrence continued to concentrate on firearms manufacturing. Richard S. Lawrence and Tyler Henry, a gunsmith and foreman at Robbins & Lawrence, worked together on the Jennings Repeating Rifle, a project that combined their talents with those of Horace Smith and Daniel Wesson, later to become famous both for their revolver designs and for the Volcanic lever-action pistol and carbine.

Lawrence invented a lubricated bullet which improved the function of breech-loading repeaters, and Henry would build on his experience with both the Jennings rifle and Volcanic arms to develop the Henry lever-action repeating rifle, a forerunner to the famous Winchester Model 66 rifle and carbine. Lawrence also developed the "Lawrence Pellet Primer System," which was successfully used with Christian Sharps' breech-loading carbines and rifles of the Civil War period. Lawrence would later become Master Armorer for the Sharps Rifle Manufacturing Company at that company's Hartford factory.

In 1858, the buildings and machinery of the former Robbins & Lawrence company were purchased by E. G. Lamson and his business partners, who then manufactured sewing machines in the former rifle shops. When Civil War erupted in 1861, this firm turned their efforts to arms production as well. They received a government contract for 50,000 longarms patterned on the U.S./Springfield Armory Model 1861 Rifle-Musket.

In 1864, E. G. Lamson received a government contract to produce 1,000 breech-loading repeating carbines designed by Albert Ball of Worcester, Massachusetts, as well as a second contract for 1,000 Palmer breech-loading carbines. These arms, which were delivered in mid-1865, came too late to see service with the Union Army. After the war, Lamson changed the name of his firm to the Windsor Manufacturing Company, and by 1870, he had sold his arms making tools and machinery to Winchester and Smith & Wesson. He continued in business as a manufacturer of machine tools for a number of years, later under the banner of Jones & Lamson Machine Company of Springfield, Vermont.

What became known as "The American System of Manufacture" had its roots in firearms production, both in New England and at John Hall's rifle shop in Harpers Ferry, Virginia. Robbins & Lawrence and their successors played an important role in this era, as did several other rifle works in the Connecticut River valley. Although the company founded by Nicanor Kendall, Samuel E. Robbins, and Richard Smith Lawrence is long gone, their influence continued for many years through the products of Smith & Wesson and Winchester Repeating Arms Company.