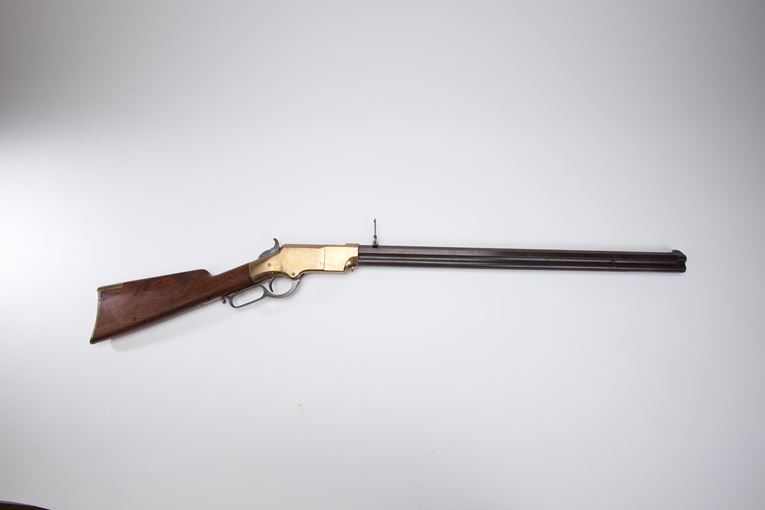 Although manufactured in 1864 at the height of wartime sales, this rifle was purchased by a civilian. The brass-frame Henry Rifle was the predecessor to the Winchester Model 1866, and may be easily distinguished from this latter arm by the absence of a forestock. In addition, the Henry was loaded from the muzzle end of the magazine tube and therefore did not have the receiver loading gate common to the Model 1866. This example was made in April/May of 1864.


The Henry Rifle was truly revolutionary for its time. Produced during the Civil War, this .44 caliber rimfire repeater had a capacity of fifteen rounds, and could be fired as quickly as the shooter could work the lever and take aim. When facing Confederate troops armed with muzzle-loaders whose rate of fire under ideal circumstances was three shots per minute, the Henry provided its users with a formidable advantage. While some Henry Rifles were obtained by the Federal government and issued to the 1st District of Columbia and 1st Maine Cavalry regiments, most were purchased privately and carried by Union cavalry and infantry troops serving in the Western Theater. Over 14,000 Henry Rifles were manufactured between 1860 and 1866.