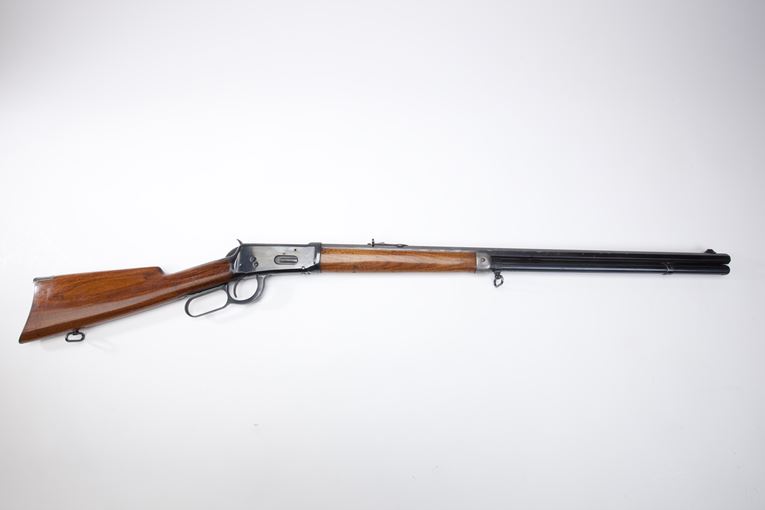 This rifle was donated by Mr. Lance in person in April, 2003 after having driven from Indiana to see the museum galleries. This rifle has special order sling swivels and a jeweled bolt.


In May 2003, the Museum received the following narrative from Harry D. Lance, Sr.:

My name is Harry D. Lance, Sr. I am the second of four sons of Richard Lance. My fondest memories of my father are the times spent at our deer camp. I started hunting with my dad at age 16. Every year we would go to my grandparents' camp in Baldwin, Michigan on November 15, opening day. My father always made sure each of us boys knew how to load and unload our guns, where the safety on the gun was and worked before we went out hunting with him. He also made sure we observed all safety rules while afield. My father's gun was his prized possession and he took extreme care of it and for many years it always came through for him. Everyone in deer camp knew when dad shot because his gun had a very distinct sound when fired. I always, for some reason which I'm extremely proud of, was the one who hunted with dad and always when he shot his deer I came to attention and listened for him to call "Bimbo", his nickname for me. This was my cue to come help and I was proud as a peacock that I was the one he wanted to come help him. As soon as I arrived he would be standing with a big smile and proudly say, "Bertha did it again."

I remember the first deer I shot. I don't know who was happier, me or him, because the thrill of my first deer or the fact that he was so proud of me because he had the biggest smile on his face and couldn't wait to show it off in camp. Where I hunted, wounded deer always ran to hide and the hunters never seemed to try to track them down. On my way back to the car, I came across one and shouted, "Dad, I've got one!" and fired my rifle; as always, dad made a beeline to me and started to laugh. I couldn't understand why and then it hit - I had said, "I got one" then fired instead of shooting and then yelling. This has been a long running joke with us - the fact that I'm the only one who can get a deer before I shoot it.

The last year my dad was deer hunting his health starting failing him and he had trouble walking into the woods but somehow he made it to the blind we set up for him on opening day. My youngest son, Harry Jr.,"Deano", was close by to help Grandpa and dad was again proud that Deano chose to hunt with him and my son will always be proud to say he was with Grandpa out hunting deer and that he was with him when the last buck my dad shot with that gun was while they were hunting together.

To this day, my son glows with pride to say he helped dress and drag that buck out for his grandfather. I only pray that I can be half the companion and grandfather to my sons and grandchildren that my dad was. When my father is gone I can take my grandchildren to the museum to see the rifle and relive the memories of all the great times spent my father at deer camp.

When my dad, mother and us boys brought this rifle to the National Rifle Association museum in Fairfax, Virginia in April 2003, we were greeted by curator Doug Wicklund. After dad donated his rifle, Doug asked us boys to write some of our memories about dad and his rifle. So I thought about this for awhile and decided not only to write about his rifle, but to write about the man.

Dad was an avid hunter and fisherman. He was hunting with a Model 94 30-30. He always told my mother, "I can't hit anything with this rifle. Something is wrong with it." This was back in the fall of 1963. She went down to our local hardware store and bought this new rifle for dad. Let me tell you, he really liked it. There were four of us boys: Richard C., Harry, Tom & Don.

As we got older, dad would take us with him to deer camp which was located in Baldwin, Michigan. We had to sit close by so he could show us, as he would say, how it was done. Dad told each one of us boys, "If you harvest an animal, you use it. You don't kill just to kill and you take just what you want to use and don't waste any." He believed in this very strongly.

One of my memories of my first deer camp was when my brother, Harry, and myself arrived and we were sitting talking about the next day of hunting. My dad told my Uncle Red that he would like to shoot a deer crossing a two track road. Uncle Red said, "Richard, it's impossible. They are just too fast. It can't be done." Dad bet him $10.00 it could be done and Red took the bet. The next morning after daylight, dad had my brother and I and our cousin drive what we call the triangle. We started to drive this area and heard deer running ahead of us. We hollered to our dad that they were coming. All of the sudden we hear this shot. We knew it was dad's rifle. No other rifle sounded like his. When we came out of the other side of the woods, here lies a deer in the middle of the road with dad smiling.

I know no one person is perfect, but as a dad, friend, and conservationist, he was as close as you can get. Dad passed away just over one month after donating his rifle. But he was comforted with the fact that his rifle will be taken care of so future Lance generations and other Americans can enjoy it. In the future, say 25 to 50 years from now, great and great, great grandchildren can say, "This belonged to my great, great grandfather." Thanks to the N.R.A., this will be made possible.

Just a line to tell you about the rifle my husband of 54 years donated to the National Rifle Association. This rifle was a gift from me. I bought it in October in the early 1960's from a hardware store in our hometown, St. Johns, Michigan. Rich had a 30-30 Winchester rifle that he said, "wouldn't hit the broad side of a barn" - he missed many deer with it. I wanted to give him something nice, he was a great husband and a wonderful father to our four boys. I was working and making good money, so I went to the hardware store where they sold all kinds of sporting goods. I asked about a new rifle and the young man who helped me said, "A man bought a brand new rifle and traded one in that is just like new and if you want it you can have it for $100.00." I asked if I could bring it back if Rich didn't like it. He asked the owner and he said yes. I took it home and when Rich came home, I gave it to him. He loved it!

The stories I've heard about that rifle are something. He loaned it to an executive of General Motors. The man came back from his hunting trip and said, "Name your price and I'll buy it!" Rich said, "You don't have enough money to buy this rifle." He donated it to NRA because he couldn't give it to four boys. They all agreed when Rich said he wanted to donate it to NRA. He was very sick when he donated it. He donated it in April 2003 and passed away in May 2003. Rich loved that rifle and made sure it took it's place in history. He was a great husband, father and friend to all. Thanks for reading this.