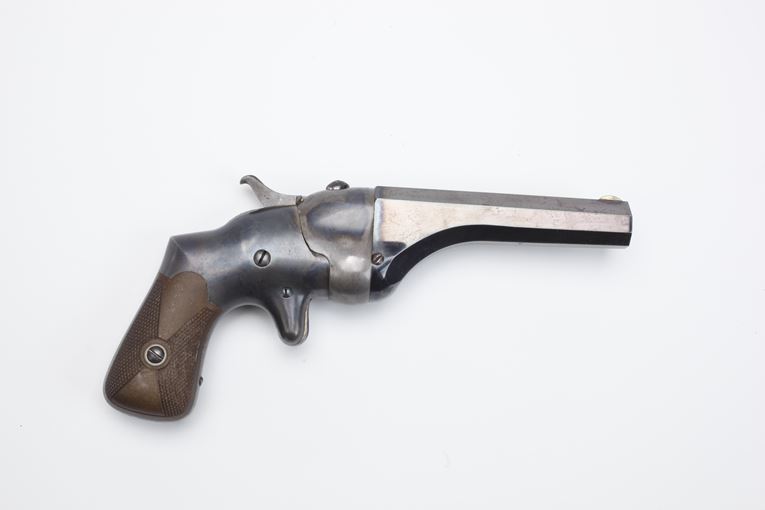 Introduced in 1865, approximately 7,400 of these single shot derringers were manufactured before production ceased in 1868 due to a defaulted mortgage. A potent personal defense arm, the 24-ounce, Hammond, with its 4-inch blued barrel and case-hardened frame, could chamber both .44 short or .44 long rimfire cartridges. Various barrel lengths, rimfire caliber chamberings and finishes are known to exist, but are very scarce.


Introduced in 1865, approximately 7,400 of these single shot derringers were manufactured before production ceased in 1868 due to a defaulted mortgage. A potent personal defense arm, the 24-ounce, Hammond, with its 4-inch blued barrel and case-hardened frame, could chamber both .44 short or .44 long rimfire cartridges. Loading was accomplished by pivoting the case-hardened breechblock to the left. Some variations of this design include models chambered in .22 rimfire, .32 rimfire, and .50 rimfire calibers, as well as those with 12-inch target barrels. A pistol-carbine with detachable wire shoulder stock was also produced.

The Connecticut Arms & Manufacturing Co. was one of many firms that had its genesis during the American Civil War. Founded in 1863 by brothers Henry B. and Lewis Hammond, the company was located at Naubuc, a town located about ten miles southeast of Hartford. The Hammond brothers enjoyed only limited success in the field of firearms production, and by 1890, their venture had gone defunct.

The firm's difficulties began during its earliest years. Its initial design was rejected by the U.S. Patent Office because it was very similar to existing patents held by other inventors. An amended application was delayed considerably through a clerical error, only to be rejected a second time due to the poor quality of the patent model submitted with the application.

Undeterred, the brothers returned to their shop to try once more. In the process, they produced a revised design complete with an improved patent model and other necessary documentation. This time, their efforts met with success. Their application for a single-shot breech-loading rifle and carbine was submitted on September 30, 1864, and the brothers received their first patent, #44798, one month later.

This long arm featured a very strong pivoting action which was suited to use in various configurations, including pistols and pistol-carbines with detachable wooden or wire shoulder stocks; target models with barrels in lengths up to 24 inches; and a cased line-throwing gun. Typically, these guns featured either a case-hardened frame with blued barrel, or nickel-plated finishes, and chamberings included .22 shot shell, .32 rimfire, and .44-40 shot shell calibers. Additional calibers of .22 long and short; .32 long and short; .44 Henry flat, and .50 long calibers were available in later versions.

A standard model was fitted with walnut grips, and at least one deluxe model with ebony stock and fore end was produced. The patent date of October 25, 1864 appeared on the top of the breechblock. Military-style arms also included the stamping, "H. HAMMOND" above the date stamp, while other models bore the title, "CONNECTICUT ARMS & MANF'G CO. NAUBUC, CONN." in a single line on the top barrel flat. Loading is accomplished by drawing the hammer to half-cock, then depressing a button release on the top of the breech block. As the breech block moves rearward and swings to the left side, the built-in ejector extracts the fired case from the now-open chamber. After inserting a fresh cartridge, the breech block must be manually closed. The hammer also must be cocked manually. A groove in the top of the release button serves as a rear sight on Hammond pistols, while long arms utilize either peep or open rear sights. The half-round/half octagonal barrels are tapered slightly toward the muzzle end, and mount either bead or blade front sights, depending on whether the piece is intended for solid shot or shot shell ammunition.

Most production model pistols also featured checkered gutta percha grip panels in place of the original oil-finished walnut grips. The company's long arms were not good sellers, and most marketplace success was enjoyed by their "Bulldog" single shot pistols. These were chambered in .44 rimfire caliber, and their beefy receivers could handle either pistol or rifle cartridges with equal ease. The length of the octagonal barrel was four inches, although a .50 rimfire caliber model with a six-inch barrel was also produced. This latter version is exceptionally rare and commands a premium in the modern collector's market.

Unlike the company's long arms, Bulldog pistols featured a spur trigger without a ring trigger guard. Unfortunately, no known records exist regarding either production dates or totals. Most experts estimate production at fewer than 8,000 examples. The Bulldog pistols continued to appear in sales literature from various retailers until the mid-1890s. Despite its limited production and its long absence from production, these pistols, with their robust design, remain interesting items for collection and study.