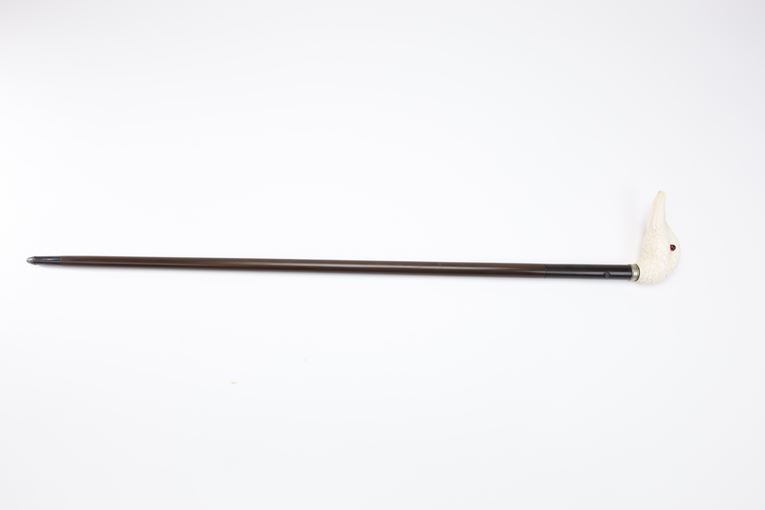 Fitted with a carved ivory handle, this metallic cartridge cane gun is one of about 1,800 produced by Remington.


The Remington single-shot "Cane Gun" is unique in several respects, including its status as the first long arm produced by Remington. In addition, the Ilion arms makers were the only major U.S. firearms firm to produce such a gun. Manufactured in both percussion and metallic cartridge versions, the Remington Cane Gun was produced over a thirty-year span beginning in 1858.

Quite practical at the time of their manufacture, dapper gentlemen of the time could combine a de rigueur fashion accessory with a personal defense firearm. Many villains, thieves, and scoundrels of the time would perhaps be none the wiser with regard to their intended victim's ability to defend himself. J. F. Thomas, Remington's master mechanic, patented the device in 1858, and he received a patent extension in 1872. Both patents shared the same number, and the patent applications were written without specification as to ignition type. In fact, the same design could be used with either percussion or metallic cartridge, and this feature ensured Remington's exclusive rights to U.S. manufacture of cane guns.

Approximately 2,300 of these guns were manufactured, 1,800 of which were of the .22 or .32 rimfire caliber metallic cartridge design. Percussion cane guns were offered in .31 and .44 calibers. Gutta percha handles commonly were of a dog's head, claw-and-ball, golf club, or plain curved-L variety, and ivory handles were also available. The Remington patent and serial number stampings were included on the gutta percha handle. A German silver ferrule ring adorned the handles of these arms, and the Cane Gun's tip was typically made from steel.

As originally designed, Thomas's invention consisted of two parts: a lower, or barrel section, complete with percussion cone; and an upper, or case section with attached cane head, which fitted over the cone and contained the gun's action. The internal hammer and inconspicuous button trigger aided in the disguise of this walking-stick-turned-personal-defense-arm. Capable of firing either round ball or shot, percussion model Cane Guns were 32 ? inches in length. A black powder charge and a solid ball or shot were loaded through the muzzle. Total weight of these Cane Guns was between 20 and 24 ounces. Cocking the gun was accomplished by pulling back on the handle. This exposed the percussion cone for capping, while also extending a catch spring that served to keep the action from being closed inadvertently. If desired, the case could be closed without firing by depressing the catch spring and pushing the handle forward. The gun could not be fired with the handle closed, which acted as a safety feature for its gentlemen user.

The action of the Cane Gun consisted of a flat-disk hammer that was connected to a spring-loaded rod. This rod possessed a groove which engaged the sear when the gun was cocked. When the button trigger was depressed, the sear disengaged from the rod, and the hammer was driven against the percussion cap by the mainspring, thus firing the gun. The rifled barrel featured six lands and grooves, and the interior diameter of the cane shaft was larger than that of the barrel so that the projectile would not make contact with this section. A small piece of cork could be inserted into the tip to keep dirt from obstructing the barrel. In metallic cartridge versions, the percussion cone was replaced with a firing pin which was housed in the bottom portion of the action, and the breech end of the barrel accommodated a chamber for a single metallic cartridge.

To load, the head/action was unscrewed from the barrel, and a cartridge was inserted. Lacking an ejector or extractor, spent cartridges were unloaded by once again unscrewing the action and poking the empty case with a rod. The hammer, which was initially a carry-over from the percussion model, was later replaced by an extended rod that functioned as a firing pin extension. Other modifications included a redesigned chamber which was located at the end of the barrel, and a barrel that screwed into rather than onto the action. Remington's earliest metallic cartridge model was the No. 1 Cane, a 35 ?- inch long, 16-ounce model chambered for a .22 rimfire caliber cartridge. The later .32 caliber No. 2 Cane was one inch longer than the No. 1 and weighed in at 24 ounces.

An 1877 ad listed prices for these guns at $10 for versions featuring gutta percha heads; the more elegant and expensive ivory heads added $5 to the cost. A box of 1000 cartridges could be purchased for prices ranging between $6 and $17, depending on the caliber, case length (short or long), and projectile type (bullet versus shot). The .22 short cartridge was loaded with a 30 grain ball and a 3 grain powder charge; the .22 long used the same bullet weight with a 5-grain charge. The .32 caliber short and long cartridges were loaded with a ball of 82- and 90-grains; and a charge of 9 or 13 grains respectively.

The Remington Cane Guns are quite popular among collectors of 19th century firearms, curios, and oddities. Although Remington was not the only firm to produce such items, their product most certainly represents the ultimate step of the evolutionary process for firearms of this type. Superior in design and function to pneumatic, percussion, and other metallic cartridge models, Remington's Cane Gun is a noteworthy addition to any firearms collection.