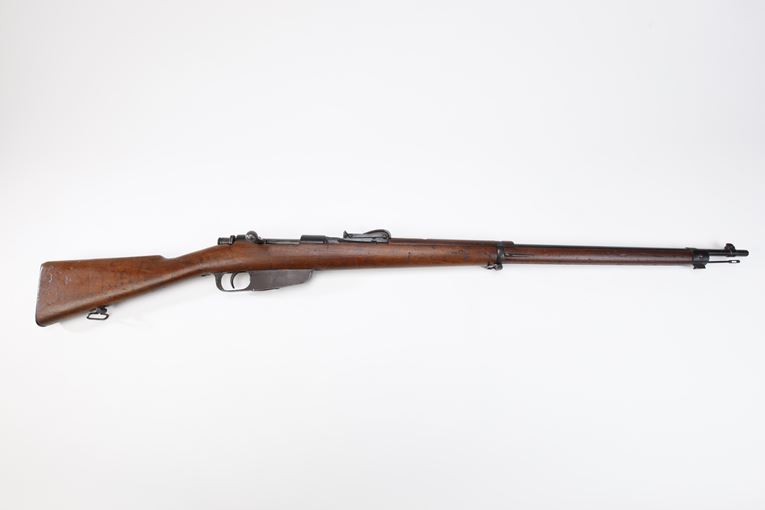 Incorporating a Mannlicher style magazine, this rifle has a Mauser action with the bolt handle located forward of the rear receiver bridge. SN 1978


The Carcano rifle action was jointly developed by Lt. Col. Salvatore Carcano and Col. G. Parravicino at the Torino Arms Factory in Turin, Italy. This turnbolt 6-shot repeating action, featuring dual locking lugs on the front of the bolt, is a copy of the Mauser Model 89, but it employs a single-column magazine of Mannlicher design.

Initially adopted in 1891, the simple but rugged Carcano rifles and carbines were the mainstay of the Italian Army for over 54 years and saw service in both World Wars. Over 54 million have been produced. The original Carcano design was chambered for the 6.5mm Carcano cartridge, which was one of the first small-caliber smokeless military cartridges to be adopted by a major military power. Model 1891 Carcano rifles and carbines remained in production through the end of the Second World War. The carbine variant employed a permanently-attached folding bayonet, while the rifle mounted a standard knife bayonet.

In 1938, Italy adopted a new, larger caliber 7.35mm Carcano cartridge, which was based on the 6.5mm Carcano case but with an expanded neck to accommodate the larger bullet. The M38 rifle and carbine entered production during this period, but Italy's involvement in the Second World War precluded large-scale adoption of the new arms. Consequently, the 7.35mm cartridge and chambering were both dropped in favor of the original 6.5mm design, and many M38 long arms were re-barreled in 6.5mm. A special 6-shot cartridge clip must be used with the Carcano action. Either full- or partially-loaded clips may be inserted through the open action. When the clip is pressed down fully on the follower, a spring-loaded catch located in the rear of the box magazine secures the clip in place. After all cartridges have been fired, the empty clip drops out through the open bottom of the magazine. The Carcano clip accommodated either the 6.5mm Carcano or the 7.35mm Carcano cartridge. Without a clip, the rifle can only be used as a single-shot arm.

This was a severe handicap if clips were lost or unavailable. Carcano arms were produced in Italy by the Italian Small Arms Arsenal at Terni, and at the National Arms Factory in Brescia. Additional examples were also manufactured by P. Beretta in Gardone, Italy. In addition to Italian Army production, Carcanos were also supplied to the Finnish Army during its war with the Soviet Union during the Second World War. Some M38s were also manufactured in 7.92mm caliber (8x57mm Mauser) for use by German armed forces. A small-scale 6.5mm M 91 Carcano carbine, known as the Italian or Fascist Youth Carbine, was produced as a boy's training rifle. At the war's end, many former Italian Army Carcanos found their way to the United States with returning servicemen as trophies of war. Thousands more became available for sale as surplus military arms.