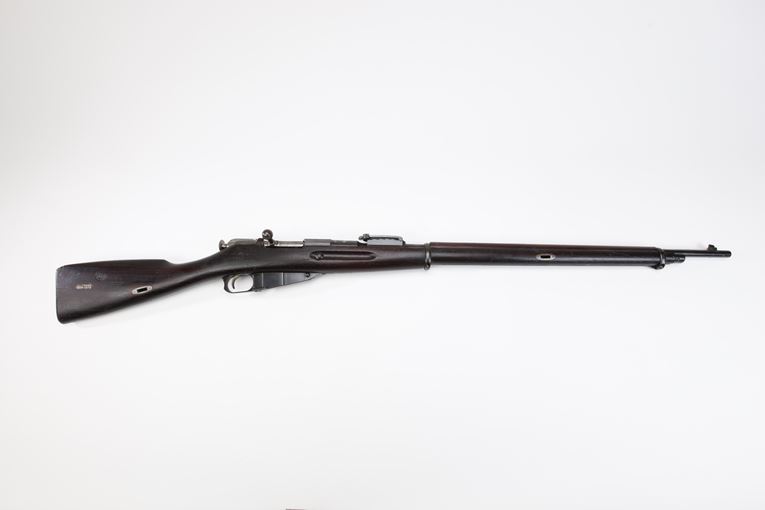 During the First World War, Remington produced the Model 1891 Moisin-Nagant rifle under contract to the Russian government. Bearing the mark of the Tsar, this bolt action rifle was later received by the NRA for testing and evaluation. SN 527007

During the Second World War, Remington manufactured the M1903 (Modified) rifle, a transitional long arm in which stamped parts replaced some that had been milled in the earlier model, while other parts were dispensed with altogether in the interests of reducing production time. The company also manufactured the redesigned M1903A3 battle rifle and M1903A4 sniper rifle. Eliphalet Remington II died in 1861, at which time Philo took over management of the company.

Samuel died in 1882, and Philo purchased his share in the company. By 1886, E. Remington & Sons had experienced serious downturns, and the company went into receivership. In 1888, Marcellus Hartley, a partner in the New York sporting and military goods firm of Schuyler, Hartley, and Graham, as well as the founder and owner of the Union Metallic Cartridge Company, went together with Winchester Repeating Arms Company to purchase Remington. Each partner had an equal share of the firm, which was renamed Remington Arms Co., with Hartley serving as president and Thomas Bennett of Winchester assuming the role of vice president. In 1896, Winchester sold its stake in Remington to Hartley.

Marcellus Hartley died in 1902, and leadership of the company passed to Marcellus Hartley Dodge. In 1910, Remington Arms and Union Metallic Cartridge were merged into a single company, known as Remington-UMC. In 1934, both company's name and ownership changed as Remington-U.M.C. was purchased by DuPont and reorganized as the Remington Arms Co., Inc. The Ilion armsmaker remained a part of the DuPont organization until 1993, when Remington was purchased by the investment group of Clayton Dubilier Rice.