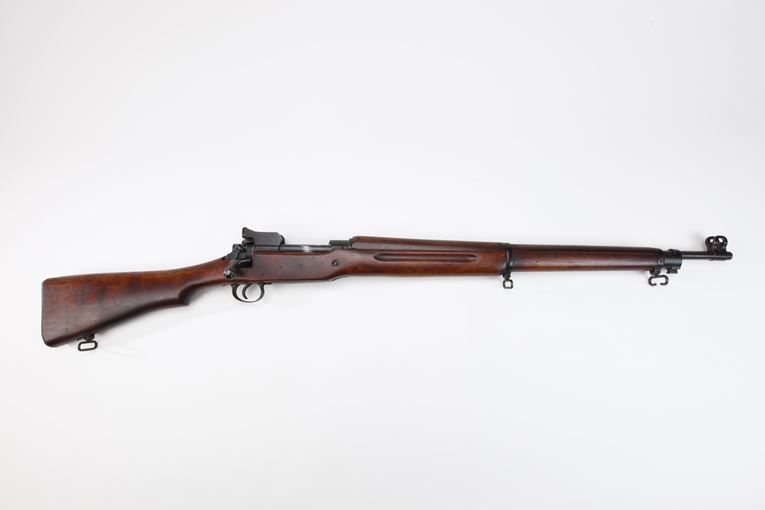 Eddystone Arsenal was the manufacturing plant responsible for producing the Remington contract Model 1917 rifles for the U.S. goverment during 1917 and 1918.

Over the years, the Enfield armory produced a variety of arms for the British Crown, including the famous Rifle Musket Pattern 1853, which saw extensive use with both Union and Confederate armies during the American Civil War. Over 500,000 of these arms were imported during the conflict, making them second only to Springfield Armory-produced longarms in terms of usage during the war. In addition to the standard .577 caliber Enfields, an experimental .45 caliber hexagonal bore model was produced. These yielded outstanding accuracy with their special fitted bullets, and although they were generally not issued as service arms, these Whitworths were used by Confederates as a sniper arm. Enfield-produced arms also include the breech-loading single-shot Martini-Henry rifle, the Lee-Metford, the Short Magazine Lee-Enfield, or No. 1 Rifle, along with several variants of this design.

These rifles, which were adopted in 1902, served with British and Commonwealth infantrymen into the 1950s. A later bolt-action magazine rifle, designated the Pattern 1914, was inspired by the U.S. Model 1903 "Springfield." The only Mauser-pattern arm ever adopted by British forces, these rifles were developed at Enfield. Britain's involvement in the First World War prevented full-scale production in England, but the .303 British caliber P-14, later designated the Model 3, was produced in great numbers under contract in the United States by Winchester and Remington, and at Eddystone Arsenal in Pennsylvania. P-14 and No. 1 rifles served as the workhorses for British, Canadian, Australian, and New Zealand troops during the war. More accurate than the No. 1, many P-14s were fitted with Aldis or Pattern 1918 telescopic sights for use by the British Army as sniper rifles.

By 1828, he had established his own forge in Ilion, and he soon came to dominate the local trade, producing over 8,000 barrels per year for gunsmiths who would do final rifling and fitting.

Remington's involvement in the manufacture of completed firearms came in 1848, when the company received a contract for the completion of 1,000 Jenks breechloading carbines for the U.S. Navy. In addition, Remington took over a defaulted contract from another manufacturer for the production of 5,000 U.S. Model 1841 "Mississippi" rifles. The business expanded through the 1850s, and handgun production began in 1857 with the introduction of the Remington-Beals pocket revolver. The coming of the Civil War naturally brought about a dramatic increase in the demand for firearms, and Remington's production also increased to keep pace.