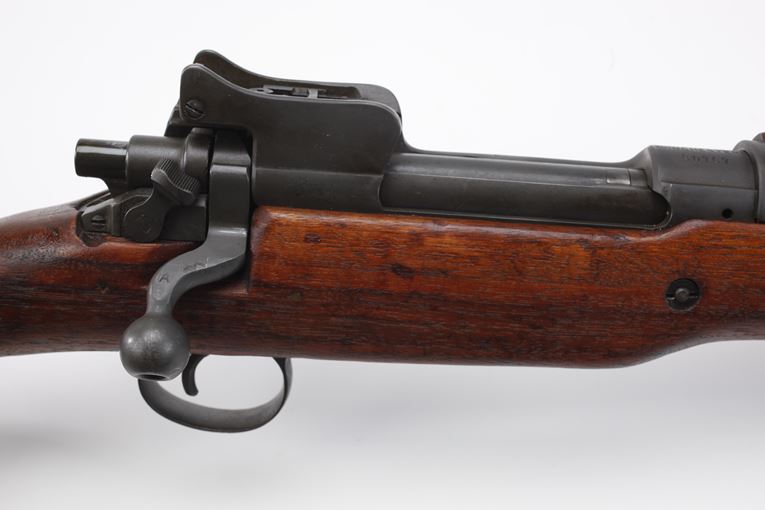 Joining Springfield Armory in producing the Model 1917, Winchester and other contractors helped produce over two million of these rifles during the war years.


Circa 1914 Britain/U.S. Enfield Bolt-Action Box-Magazine Rifle (repeater/ breech-loading/ smokeless powder/ cartridge ammunition) During the First World War, both Britain and the United States used Enfield rifles of the type seen here. Designed in Britain and made in the U.S. by Remington, Winchester, and Eddystone Arsenal, this is one of the simplest and sturdiest bolt-action rifles ever produced. U.S. Army Sergeant Alvin York carried an Enfield in 1917 when he won the Medal of Honor for capturing nearly the whole German army." In fact, more of these arms were used by U.S. forces than by Britain. All those who used it found it fast and simple to operate." --Dr. William L. Roberts, THE AMERICAN LIBERTY COLLECTION; #121

The British government armory at Enfield Lock, Middlesex, was founded in 1804 to assemble Brown Bess muskets for use by the country's military forces. In 1841, a fire destroyed the government rifle shops at the Tower of London, consequently, Enfield took over many of the responsibilities formerly carried out at the Tower.

Over the years, the Enfield armory produced a variety of arms for the British Crown, including the famous Rifle Musket Pattern 1853, which saw extensive use with both Union and Confederate armies during the American Civil War. Over 500,000 of these arms were imported during the conflict, making them second only to Springfield Armory-produced longarms in terms of usage during the war. In addition to the standard .577 caliber Enfields, an experimental .45 caliber hexagonal bore model was produced. These yielded outstanding accuracy with their special fitted bullets, and although they were generally not issued as service arms, these Whitworths were used by Confederates as a sniper arm. Enfield-produced arms also include the breech-loading single-shot Martini-Henry rifle, the Lee-Metford, the Short Magazine Lee-Enfield, or No. 1 Rifle, along with several variants of this design. These rifles, which were adopted in 1902, served with British and Commonwealth infantrymen into the 1950s.

A later bolt-action magazine rifle, designated the Pattern 1914, was inspired by the U.S. Model 1903 "Springfield." The only Mauser-pattern arm ever adopted by British forces, these rifles were developed at Enfield. Britain's involvement in the First World War prevented full-scale production in England, but the .303 British caliber P-14, later designated the Model 3, was produced in great numbers under contract in the United States by Winchester and Remington, and at Eddystone Arsenal in Pennsylvania. P-14 and No. 1 rifles served as the workhorses for British, Canadian, Australian, and New Zealand troops during the war.

More accurate than the No. 1, many P-14s were fitted with Aldis or Pattern 1918 telescopic sights for use by the British Army as sniper rifles. Later designated the Rifle No. 3, over 4 million P-14s were produced in .30-Ô06 caliber as the U.S. Model 1917 Magazine Rifle for use by American troops "Over There." These were the principal U.S. battle rifle during the war, and many P-14s and M1917s continued in service with both British and American forces through the early days of the Second World War.

The Indians referred to these arms as "many shots," and "spirit gun," which showed a measure of awe and respect for the products of the New Haven-based company. Many warriors were able to obtain these arms for themselves, and more than twenty of them were used against George A. Custer's 7th Cavalry and their single-shot Springfield carbines at the Little Bighorn in June, 1876. Winchester repeaters also found favor with miners, homesteaders, ranchers, lawmen, and highwaymen.

Winchester's success continued with the centerfire Model 1873 and 1876 lever-action repeaters, both of which were available in a range of calibers and optional features. The Model 1886 was a milestone for the company in two respects: it marked the first association between Winchester and designer John Browning, and it was also the first lever-action rifle capable of chambering big-game calibers, including the .50-110 Express cartridge. Other Browning-designed Winchesters include the Model 1885 single-shot rifle, Model 1887 lever-action shotgun, Model 1890 slide-action rifle, Model 1893, Model 1894, and Model 1895 lever-action rifles. The Model 1894 alone accounted for over five million sales and is still in production. Winchester was able to enter the military market in later years, with sales both to foreign governments and to the U.S. Army.

During both World Wars, Winchester-manufactured rifles and shotguns served U.S. and Allied troops in various parts of the globe. In addition to contract production of the U.S. Model 1917 bolt-action and the famous M1 Garand semi-automatic rifles, Winchester also produced the Model 1897 and Model 12 slide-action shotguns, as well as the M1 Carbine.

In the civilian market, the bolt-action Model 70 rifle is still popular with big game hunters, and Winchester lever-action rifles continue to meet with sales success. Under his leadership Oliver Winchester saw his company rise from near-bankruptcy to become one of the most successful firearms manufacturing firms in the world. He was a gifted businessman who was able to foresee opportunities and to make the most of them, and a skilled judge of people and their abilities, as evidenced both by the success of his company and by his association with men such as Horace Smith, Daniel B. Wesson, B. Tyler Henry, and John Browning. Declining health forced him to take a less active role in the affairs of his firm, but the company's continued success was all but assured by his vision and leadership.