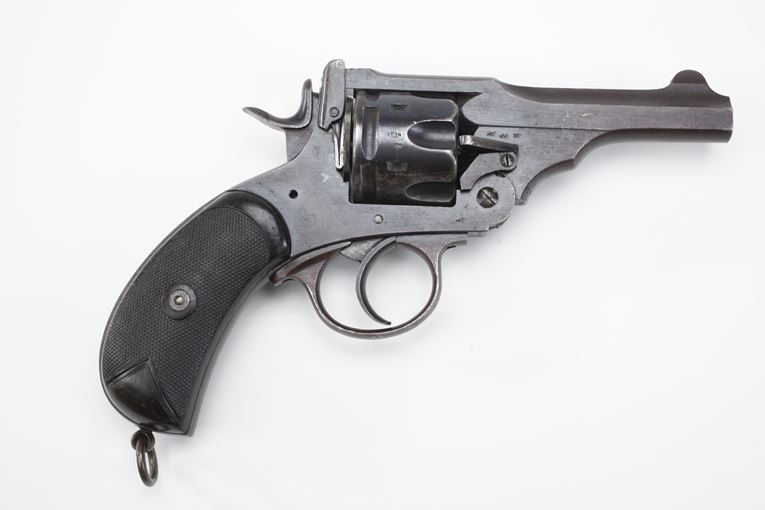 The Mark V was the last double-action model Webley revolver in .455 produced with the traditional bird's head grip used with other earlier Webleys. The Mark V was short-lived in production, being manufactured only from 1914-1915. Many Mark V revolvers were dispatched to former colonies like Australia during the First World War. SN 149457.


Perhaps best known as a manufacturer of handguns, the Webley name's association with firearms extends to the early 19th century. Brothers Philip and James Webley of Birmingham, England, were both established firearms manufacturers by 1835, and after James' death in 1856 and the closure of Samuel Colt's London factory in 1857, the path was clear for Philip and his sons, Thomas William and Henry, to enter and later to dominate the production of factory-produced British handguns which featured interchangeable parts.

Although of high quality, the hand-crafted nature of revolver manufacture in Britain during this period meant that output consistently lagged far behind demand. This situation began to change in 1887, when Thomas William Webley obtained machinery suitable to the task. The firm's military revolvers trace their roots to an initial 1887 British government order for 10,000 P. Webley & Sons double-action top-break Mark I Revolvers. These six-shot auto ejectors with the distinctive bird's head butt and lanyard ring were chambered for the .455 Webley caliber ball cartridge, which remained the standard for Britain's military forces until after the Second World War. Modifications to the basic design in 1894 and 1897 led to the introduction of the Mark II and Mark III revolvers. As their product line evolved, so too did the company.

During 1897, P. Webley & Sons merged with gun-making firms Richard Ellis & Son and W. & C. Scott and Sons, and the new company continued in business under the banner of Webley & Scott. The next revolver in this series and the first produced by the new company was christened the Mark IV, which made its debut in 1899 during the Boer War in South Africa. The Mark IV revolver incorporated some of the best features of its predecessors, and was produced with a standard barrel length of 4 inches. Three, five, and six-inch barrels were also available. The Mark V, nearly identical to the earlier Mark IV except for its slightly larger cylinder which was intended to safely accommodate smokeless powder cartridges, was adopted on the eve of the Great War.