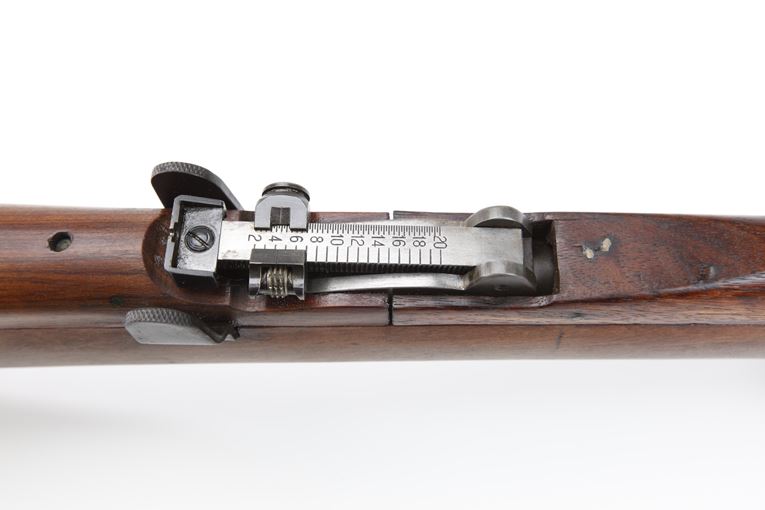 The workhorse of the British Army, the Short Magazine Lee Enfield could be fired so quickly that at the battle of Mons in 1914, German troops thought they were under machine gun fire.


1942/43 British S.M.L.E. No. 1 Mark III Bolt-Action Box-Magazine Rifle (repeater/ breech-loading/ smokeless powder/ cartridge ammunition) Used in both World Wars, the Short Magazine, Lee Enfield No. 1 remained particularly popular with Canadian forces. Actually adopted in 1907, the improved Mark III served well in jungle and in desert warfare applications, where it was used extensively. Like the Germans, the British did not adopt a semi-automatic rifle for primary use in the Second World War. This was due mostly to the unavailability of sufficient factory space and production capacity. Therefore, most semi-autos that were used by the British came from the United States. In the main, the Mark III proved to be very satisfactory, particularly when supported with fire from machine guns. --Dr. William L. Roberts, THE AMERICAN LIBERTY COLLECTION; #143

The British government armory at Enfield Lock, Middlesex, was founded in 1804 to assemble Brown Bess muskets for use by the country's military forces. As with the U.S. armories at Springfield, Massachusetts and Harpers Ferry, Virginia, this location was chosen due to its proximity to a waterway that provided both a power source and transportation for this facility. A plentiful supply of walnut trees in the area near Enfield Lock became a ready source for musket stocks. Initially, musket parts were manufactured by private concerns and cottage industries in London and Birmingham. Interchangeability of parts and quality control were both sadly lacking under this arrangement.

As the century progressed, so did technology. British ordnance officers had been considering possible replacements for the smoothbore Brown Bess, which had been the standard infantry arm for over 100 years. In 1823, the Royal Enfield Manufactory received an order for 5,000 Baker flintlock rifles. This order marked a new era in British military history, and these arms, with modifications, continued in service for 30 years.

By the end of the decade, Enfield's workforce had undertaken the conversion of 30,000 flintlock muskets to percussion ignition. In 1841, a fire destroyed the government rifle shops at the Tower of London, consequently, Enfield took over many of the responsibilities formerly carried out at the Tower. At the same time, armory workers under the supervision of George Lovell, government inspector of small arms, began replacing the back-action locks of military Brunswick rifles with an improved bar-action design, and one year later, Lovell's design for a percussion musket went into production, marking another milestone in British arms production.

In 1852, Lord Hardinge, Britain's Master General of Ordnance, began a search for a new military rifle, and gunsmiths were invited to submit designs for consideration. An ordnance committee at Enfield selected the best features from the various models that were submitted, and two experimental .577 caliber rifle-muskets were produced at Enfield. These featured three-groove rifling, and were far superior to earlier British military longarms.

After a series of tests, this design was formally adopted as the Rifle Musket Pattern 1853, more commonly known as the Enfield rifle, and the government placed an initial order for 20,000 arms. As a result, the Royal Enfield Manufactory constructed new workshops and installed additional machinery, and annual production capacity soon reached 50,000 rifles. Carbine-length Enfields were also produced for use by cavalry, artillery, and naval troops. The performance of these arms was improved by the later adoption of the Pritchett bullet. The Enfield rifle was used with great effect in the Crimean War, and it soon achieved recognition as the finest European-produced military long arm. Despite the success of these arms, problems persisted in British manufacturing practices. Much of the work was done by outside sources, and tools were often the property of the craftsmen who performed these tasks.

Quality control remained a concern among ordnance officials as well. A government commission visited the U.S. armories at Springfield and Harpers Ferry to observe American manufacturing practices. Subsequently, American machinery was purchased by Britain for use in the Royal Manufactory.

During the American Civil War, both the Union and Confederate governments scrambled to obtain sufficient stocks of military arms. Federal forces were equipped from existing ordnance inventories, and new production was carried out at Springfield Armory and under contract at a number of private factories. The largely agrarian South lacked a suitable industrial base, and many Confederate units were armed with whatever they could find, from hunting arms to captured U.S. armaments. Additional production was carried out at several arsenals with tools and equipment captured at Harpers Ferry. Even these sources proved insufficient for meeting the needs of the field armies, and both North and South turned to Europe to procure additional arms and supplies. Over 500,000 Enfields were imported by the Union and Confederate governments, making these second only to the Springfield in terms of usage during the war. In addition to the standard .577 caliber Enfields, an experimental .45 caliber hexagonal bore model was produced. These yielded outstanding accuracy with their special fitted bullets, and although they were generally not issued as service arms, these Whitworths were used by Confederates as a sniper arm.

The Enfield Snider was replaced in 1871 by the .45 caliber Martini-Henry rifle. These single-shot lever-action breech loaders featured a Peabody breech system developed by Swiss inventor Friedrich von Martini and a barrel designed by Scotsman Alexander Henry. Much of the development work on these arms was carried out at Enfield. Subsequent rifle and carbine production for both the Army and Navy was also done at the Royal Manufactory. Many of these rifles were later fitted with .303 caliber barrels in 1895 after the adoption of the new smokeless British service cartridge.

The single-shot design of the Martini-Henry eventually gave way to a new 8-round magazine rifle based on the bolt-action design of American designer James Paris Lee. Lee's action exhibited a significantly shorter bolt stroke and less bolt rotation than that of Mauser or Mannlicher bolt-action designs. These features, when coupled with the smooth operation of the Lee bolt made these rifles superior for rapid-fire. The rimmed .303 British cartridge presented a challenge with respect to reliable feeding, but this was offset by simplification of head space problems. As with earlier British military long arms, the experimental and developmental work that preceded the adoption of these rifles was conducted at Enfield. Introduced in 1889 as the Magazine Rifle Mark I, the new design featured Metford rifling, which had proven to be extremely accurate in competition at Wimbledon.

In 1891, these arms became known as the Lee-Metford. The shallow Metford rifling proved to be unable to stand up to the wear produced by cordite propellants, and in 1895, the rifling was changed to a deeper, more robust type developed at Enfield. The re-designated Lee-Enfield made its appearance as a result of this change, and these arms would serve with British and Commonwealth forces well into the 20th century. Britain's experience in the Boer War led to the adoption of several modifications in the basic Lee-Enfield design.

The Short Magazine Lee-Enfield (S.M.L.E.), also known as the No. 1 Rifle, was adopted in 1902. These were smaller and lighter than the earlier Lee-Enfield, hence the inclusion of the word "Short" in the original designation. To compensate for their reduced length, the S.M.L.E. bayonet was correspondingly longer than earlier models. These rifles also incorporated improved sights and bolt/receiver mechanisms, and the ability to re-load with charger clips. Magazine capacity was increased from 8 to 10 rounds. The slightly heavier No. 1 Mark III Rifle, which featured a magazine cut-off, was adopted in 1907. The No. 1 Rifle eventually replaced the carbine in Britain's inventory, and these are among the most famous arms ever produced at what had become known as the Royal Small Arms Factory. Over 2 million of these rugged long arms were manufactured at Enfield during the war years 1914-1918, and production continued after the war, both in England and at British arsenals in Ishapore, India and Lithgow, Australia.

Many of these rifles continued in service with Commonwealth forces into the 1950s. A later bolt-action magazine rifle, designated the Pattern 1914, was inspired by the U.S. Model 1903 "Springfield." The only Mauser-pattern arm ever adopted by British forces, these rifles were developed at Enfield. Britain's involvement in the First World War prevented full-scale production in England, but the .303 British caliber P-14, later designated the Model 3, was produced in great numbers under contract in the United States by Winchester, and Remington, and at Eddystone Arsenal in Pennsylvania. P-14 and No. 1 rifles served as the workhorses for British, Canadian, Australian, and New Zealand troops during the war. More accurate than the No. 1, many P-14s were fitted with Aldis or Pattern 1918 telescopic sights for use by the British Army as sniper rifles.

After the Armistice, Britain's requirement for military rifles waned considerably, but experimentation at Enfield did not. The S.M.L.E. Mark V and Mark VI were both produced for trials, but neither entered production. However, the latter arm gave birth to the last Lee-Enfields to be produced: the Rifle No. 4 and the distinctive Rifle No. 5, also known as the Jungle Carbine, which was the only Lee-Enfield to feature a flash hider. Although developed at Enfield, these arms were produced elsewhere in Britain and Canada, and in the United States by Savage-Stevens Arms Corp. under the terms of Lend-Lease.

During this period, Royal Small Arms Factory workers produced and repaired other firearm designs including the Czech/British Bren Light Machine Gun, the Sten Submachine Gun, the .38 caliber Revolver No. 2, and other arms. The No. 4 Rifle, adopted in 1926, was the mainstay of British forces throughout the Second World War. These arms incorporated some of the best features of the earlier No. 1 and P-14/No. 3 Rifles, including the No. 3's aperture rear sight, as well as a heavier barrel, simplified stock, improved bolt-retaining system, and a barrel that projected free from the fore end. The No. 4 Rifle Mark 1 (T), an accurized arm which featured an offset telescopic sight and wood cheekpiece, was introduced in 1942 as a sniper rifle. Some Second World War-produced Enfields feature kiln-dried walnut, beech or birch stocks, as supplies of seasoned walnut became increasingly difficult to obtain. The history of arms production at Enfield has closely mirrored that of Springfield Armory. These two facilities were founded within years of each other, and each had an influence on the products and processes of the other.

For a number of years, both were the primary research, development, and production centers for military arms in their respective countries, until changing technologies and political climates pushed them out of the position that each had long occupied. Although Springfield Armory was closed by the U.S. Army, Enfield remains in operation. The Royal Small Arms Factory continues to produce British military rifles, but the Enfield name no longer enjoys the same association it once had with the nation's military forces.