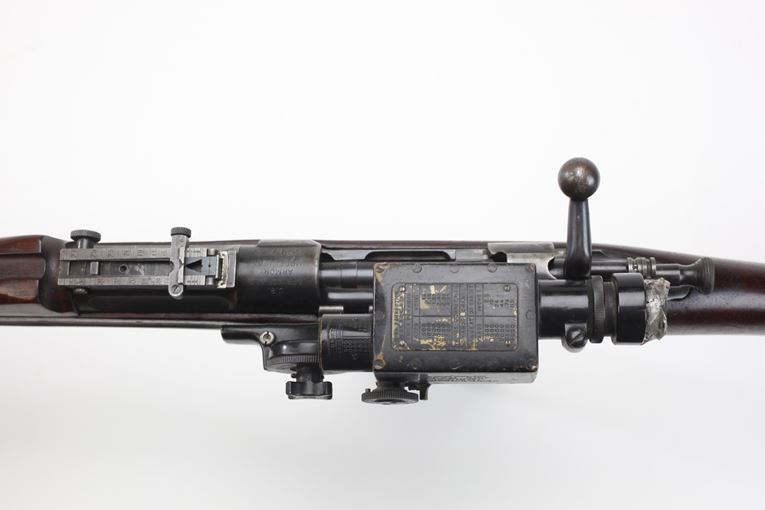 Between 1907 and 1919, several thousand Springfield M1903 rifles were fitted with Warner-Swasey telescopic sights. These prismatic scopes with soft rubber eyepieces and external windage and elevation adjustment knobs were offset-mounted on a dovetail rail that was screwed to the left side of the receiver. The elevation range dial is graduated from 0 to 3,000 yards, and is adjustable by 20-yard divisions. Windage adjustments are made in increments of 1 inch at 100 yards. Warner-Swasey and other telescopic sights were issued with leather carrying cases, and Army Ordnance manuals instructed soldiers to remove the sights, place them in these cases, and store them in a cool, dry place when not in use.

In 1911, approximately 400 Model 1903 rifles were fitted with the 6-power magnification Warner-Swasey Model 1908 sights, and an additional 5,000 rifles, including this example, date from 1914 - 1919 and feature the Model 1913 Warner-Swasey Model 1913 5.2 power sights. Many of these sights originally bore the serial numbers of the rifles on which they were installed, but after the First World War, many were sold as surplus, while others were dismounted and stored separately.

As a result, most rifles and scopes encountered today have mismatched numbers. Warner Swasey telescopic sights were also used with the Benet-Mercie automatic rifle and with the Canadian-produced Ross rifle. - The town of Springfield, Massachusetts, located on the banks of the Connecticut River, was settled in 1636 by emigrants from Roxbury. The town was nearly destroyed during King Philip's War in 1675, but it was quickly rebuilt. As early as 1776, Continental Army colonel and future Secretary of War Henry Knox recommended the establishment of public laboratories, magazines, arsenals and foundries in secure locations for the production and repair of arms, ammunition, and other ordnance stores. Both George Washington and the Continental Congress concurred with this recommendation, under which an ordnance depot was established at Springfield in 1777.

The town's access to raw materials, sources of water power, and transportation, as well as its inland location which provided security against seaborne attack, made Springfield an ideal location. Over the following year, buildings were rented or erected for use as barracks and storehouses. In addition to ordnance stores, the depot at Springfield also handled other aspects of army supply, including equipment, uniforms, tents, food, and fuel.

The end of the War for Independence also brought a decline in military activities at Springfield. In 1794, an Act of Congress directed that national armories be established for the fabrication of small arms. President Washington selected Springfield and Harpers Ferry, which was then located in Virginia, as the sites for these facilities. In addition to the advantages that contributed to the presence of a Revolutionary War depot in the town, many skilled armory workers were still living nearby. The government acquired nearly 300 acres and constructed a dam to furnish power to the armory complex, as well as shops, offices, and storehouses.

The first permanent structure to be constructed on the site was a brick powder magazine, which was torn down in 1842. Additional buildings have been constructed as necessary over the years since. Production of arms at Springfield began in 1795, with 245 muskets manufactured during that year, and approximately 80,000 were turned out before production was discontinued in 1814. The Model 1795 muskets were the first standardized U.S. martial arms to be produced and were patterned after the French Model 1763 Charleville musket. Harpers Ferry Armory also produced a Model 1795 musket, but these were distinctly different from those manufactured at Springfield.

In addition to commonly produced arms, each armory was the sole producer of certain other designs, such as the Model 1855 percussion pistol-carbine and various musketoons and cadet muskets that were produced solely at Springfield, or the Model 1803 flintlock rifle, and the Model 1841 percussion, or "Mississippi" rifles, both of which were produced only at Harpers Ferry.

Model 1861 and 1863 rifle-muskets, which were based on a modification of the earlier Model 1855, were produced in great quantities throughout the Civil War. These were the last muzzle loading, paper cartridge percussion arms to be produced by the U.S. Erskine S. Allin, Springfield's Master Armorer, designed a method for converting many of these into metallic cartridge breech loaders. This conversion consisted of a modification to the breech to permit the installation of a "trap door" breechblock with a self-contained firing pin. The famous .45-70 government caliber "trap door" Springfield rifles and carbines of the Plains Indian Wars were based on Allin's work, and these accounted for much of the Armory's production during the 1870s and 1880s.

Springfield Armory was also involved in improving the state of the art in military rifle design, and toward this end, limited-production long arms including the Ward-Burton, Lee Vertical Action, Hotchkiss, and Chaffee-Reese rifles were manufactured there. These efforts culminated in the 1890s with the Army's adoption of the smokeless powder Krag-Jorgensen bolt-action repeating rifle as its standard longarm. These rifles, as well as carbine versions, were manufactured at the Armory through the turn of the century.

During the interwar years, John Garand, a Canadian-born design engineer and Springfield Armory employee, worked on a design for a new gas-operated semi-automatic rifle. After overcoming several problems, both with his designs and with Army brass, the U.S. Rifle .30 caliber M1 was adopted by the Army in 1936.

The Marine Corps followed suit, and during the Second World War, over three and one-half million M1s were produced at Springfield. An additional 500,000 were manufactured by Winchester Repeating Arms Co. This rifle, which General George S. Patton called, "the greatest battle implement ever devised," gave American troops a significant edge over their German and Japanese enemies, most of whom were still equipped with bolt-action arms.

After the war, Springfield ceased manufacture of the M1 and turned its efforts to the overhaul and long-term storage of these rifles. The outbreak of war in Korea in 1950 caused a resumption in production at the Armory, as well as by International Harvester and Harrington & Richardson. The return of peace brought a second and final discontinuation of M1 production. Springfield Armory's continuing efforts at advancing military rifle designs yielded a series of improvements to the M1, culminating in production of the 7.62mm NATO caliber selective-fire M14 rifle, which replaced the Garand in the Army's inventory. In 1968, the Ordnance Department ceased operations at Springfield Armory. The Armory grounds, buildings, and museum, with its extensive arms and accouterments collection, have become Springfield Armory National Historic Site and are now maintained by the National Park Service.