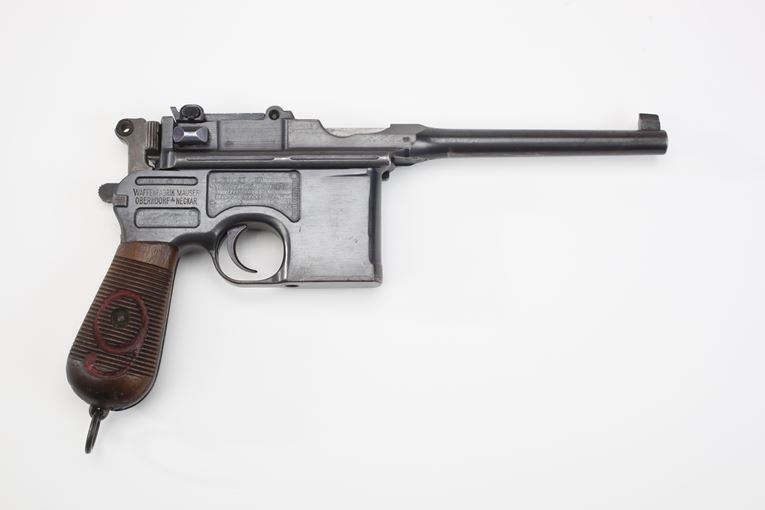 This semi-automatic pistol is marked with a red "9" on the grip panels to indicate its caliber as similar pistols were also in military service in 7.63mm caliber. SN 82153

The company was unsuccessful in its attempts to secure adoption of its rifles by Britain, but in February, 1887, with the help of the Berlin firm of Ludwig Loewe & Co., Mauser also received a contract from the Turkish government for 500,000 9.5mm rifles and an additional 50,000 carbines. In response to France's adoption of the Lebel 7.9mm smokeless cartridge rifle in 1886, Germany and other nations followed suit.

The Model 98's strength, simplicity, and ease of manufacture made it the workhorse of the German army in both World Wars, and it has also been adopted by nations around the world. Mauser patents have also served as a platform for other bolt-action rifles, including the U.S./Springfield Model 1903 military rifle. The Model 98 is still manufactured today, and many former military models have been sporterized. In addition to his rifle designs, Paul Mauser is also known for the famous Model 1896 "Broomhandle" semi-automatic pistol and pistol-carbine, the HSc semi-automatic pistol, and various pocket pistols. During the Second World War, Waffenfabrik Mauser also produced the P-08 Luger pistol for Germany's armed forces.