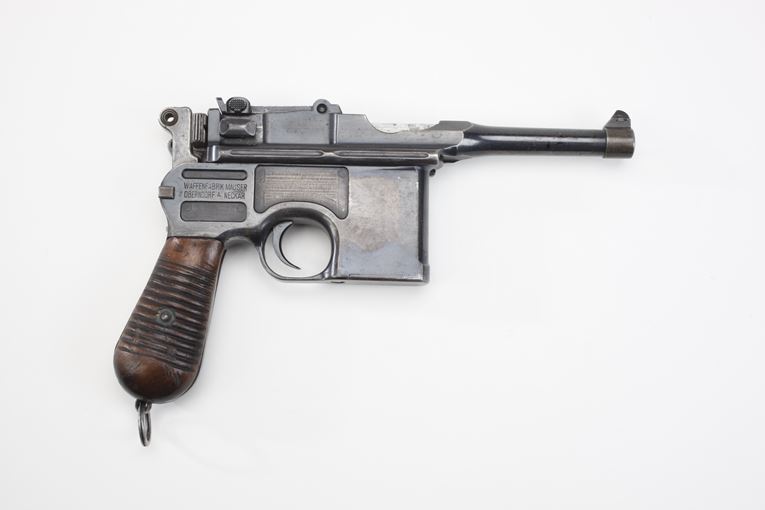 This "Broomhandle" pistol was modified with a shortened barrel to conform to regulations on small arms that were imposed on Germany by the Treaty of Versailles. SN 314591

In April of that year, the company became Waffenfabrik Mauser, a stock company. In addition to their own production, Mauser rifles were also manufactured by various government arsenals under a royalty agreement.

The company was unsuccessful in its attempts to secure adoption of its rifles by Britain, but in February, 1887, with the help of the Berlin firm of Ludwig Loewe & Co., Mauser also received a contract from the Turkish government for 500,000 9.5mm rifles and an additional 50,000 carbines. In response to France's adoption of the Lebel 7.9mm smokeless cartridge rifle in 1886, Germany and other nations followed suit.

Paul Mauser's preoccupation with the Turkish contract prevented his participation in the development of a new German service rifle. Mauser introduced a 7.65mm smokeless cartridge rifle in 1888 for Belgian military tests. This rifle, designated the Model 89, was adopted by Belgium, and sales were also made to Spain, Turkey, and to several South American countries. Mauser continued to improve his design, with the Model 92 and Model 95 rifles as the result of his efforts, but his greatest success came with the Model 98.