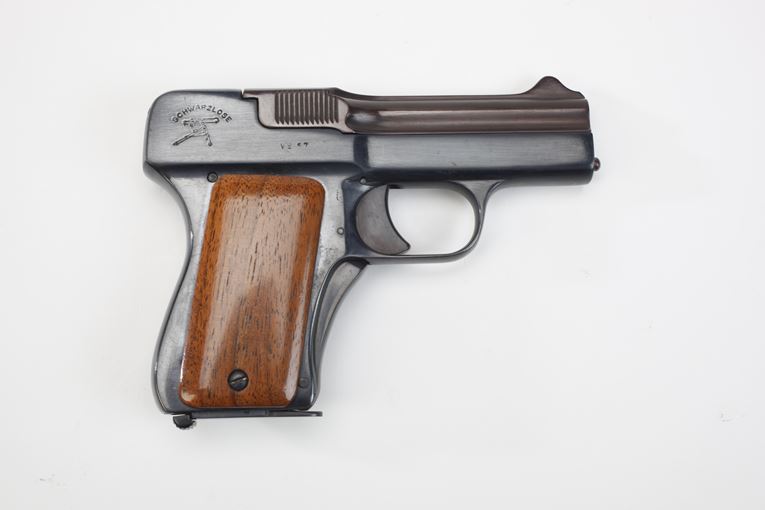 Manufactured between 1908 and 1911, this blow-forward pistol was one of several designs produced by Austrian Andreas Schwarzlose. When fired, the barrel moved toward the front of the gun and exposed the spent cartridge case, which was then knocked clear of the chamber by a mechanical ejector. A grip safety in the front of the grip, similar in appearance to the "squeeze cocking" mechanism of modern Heckler & Koch pistols, could be locked in the "fire" position by a frame-mounted push button.


After serving in the Austrian Army as an ordnance artificer, Andreas Schwarzlose turned to firearms design. He gained experience in arms manufacture in Suhl, and later opened his own factory in Berlin. Among his designs was a delayed-blowback machine gun that saw service with the Austro-Hungarian Army and remained in service through the end of the Second World War.

He also designed several innovative semi-automatic pistols, but their mechanical complexity contributed to reliability problems. In addition, the popularity of Mauser pistols, which had already found their place in the market, severely handicapped acceptance of the Schwarzlose by German military and police forces. When his factory closed in 1919 by order of the post-war Disarmament Commission, Schwarzlose continued working as a consultant for other firearms manufacturers until his death in 1936.