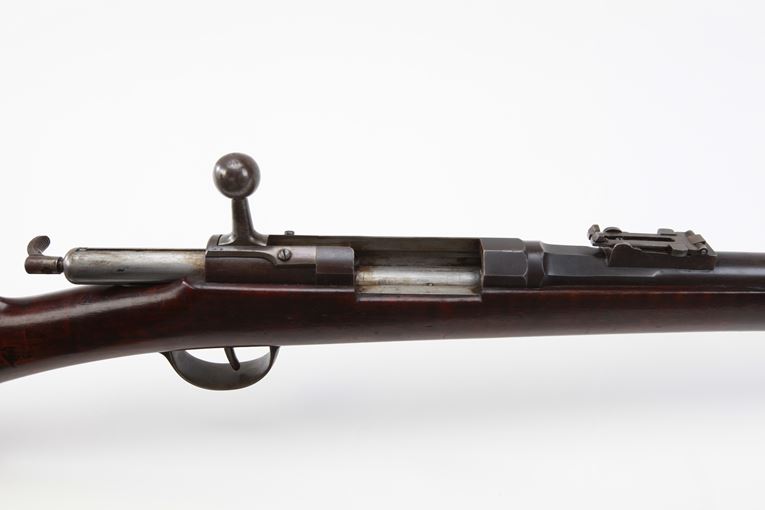 The original Norris-Mauser rifle, although superior to its predecessors, lacked the means for cocking the action aside from through operation of the bolt. Realizing the advantages to this feature, Paul Mauser once again modified a Chassepot rifle and included an experimental prototype bolt with a hook-shaped manual cocking piece that was a direct extension of the firing pin.


Original Mauser-designed bolt systems, while more reliable than their Chassepot and Dreyse predecessors, lacked both a manual cocking piece and a safety. Realizing the desirability to incorporate a means by which the rifle could be cocked without operating the bolt, Paul Mauser once again turned to the French Chassepot, which included this feature, in producing a bolt of his own design that could be cocked manually in the event of a mis-fire.

Starting with a Chassepot receiver and barrel, Mauser removed much of the rear portion of the receiver while adding a bolt-retaining yolk. The rotating bolt head included in the Norris-Mauser rifle was dropped in favor of a non-rotating head, and flush-mounted extractor was fitted into the lower left quadrant of the bolt face. The bolt handle was attached to the bolt retaining lug, and an interrupted groove on the left wall of the receiver enabled the extractor to over-ride the cartridge rim during bolt operation/cartridge chambering.

As in the earlier Mauser-modified Chassepot, this rifle had no ejector. The firing pin extends through the rear of the bolt, where it broadens and turns upward to form a hook-shaped cocking piece. When drawn to the rear either manually or through bolt operation, a catch on the cocking piece engages the sear and compresses the mainspring. To engage the half-cock safety from a fully-cocked position, a rifleman must pull the cocking piece to the rear, then pull the trigger while carefully allowing the cocking piece to move forward. Although pulling the trigger may release the half-cocked firing pin, the force of the mainspring from this position is insufficient to cause ignition of the cartridge primer.

As in the Norris-Mauser, this rifle was an experimental prototype that did not chamber a specific cartridge. Dimensions are nearly identical to those of the Chassepot-Mauser, but both the overall length and barrel length are slightly larger. Weight, caliber, and rifling remain the same as in the earlier example.