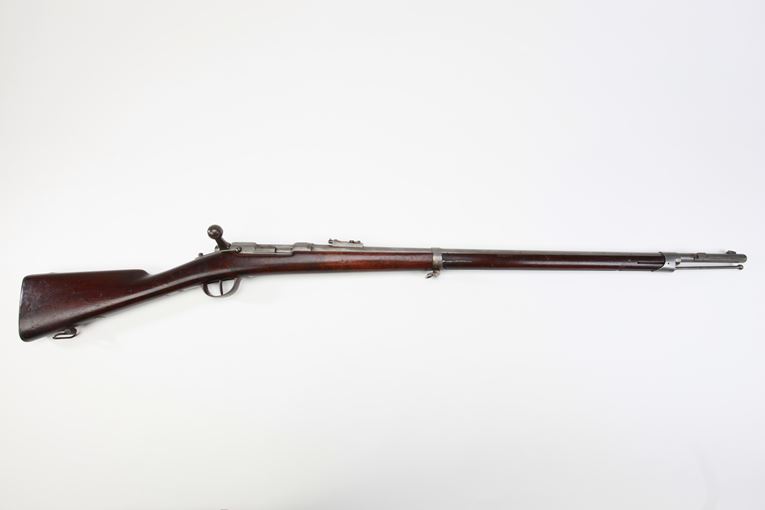 This French Needle Gun was modified by Paul Mauser to accommodate metallic cartridge center-fire ammunition. As part of the conversion, Mauser incorporated a cam-action self-cocking bolt of his own design. Although the superiority of this rifle was recognized at the time, the French resisted converting their recently-adopted Chassepot rifles until their defeat in the Franco-Prussian War proved the unsuitability of the Needle Gun in modern warfare. In partnership with Samuel Norris of Remington Arms, Paul and Wilhelm Mauser received a U.S. patent for the improvements to the Chassepot.


The Chassepot-Mauser Single-Shot Rifle was a modification of a French Chassepot Model 1866 Needle Gun, which first saw action in the hands of French troops fighting in support of the Papal States during 1867. Although the rifle performed adequately, this ignition system was inferior to the newer center-fire long arms, whose metallic cartridges were more reliable and robust than their paper and paper/copper predecessors. Several nations, as well as private interests, had begun experiments to develop center-fire rifles and corresponding metallic cartridge ammunition. Samuel Norris, the European representative for Remington Arms Co. of Ilion, New York, attempted to convince several continental powers of the advantages of the center-fire metallic cartridge for military use.

In 1867, he met Wilhelm and Paul Mauser, whose ideas on rifle design closely mirrored his own. Both Mausers had extensive experience in firearms design and manufacture. Paul, while employed at the Royal Arms Factory in Oberndorf, Germany, had improved upon Nicholas Dreyse's needle-fire design by modifying the bolt such that a cam opened and closed the action and cocked the mainspring. Although the governments of Prussia and Austria had expressed interest in this advancement, neither was willing to scrap their recently-purchased Dreyse rifles in favor of a new design. Undaunted, the Mausers formed a partnership with Samuel Norris in Liege, Belgium, with the Mauser brothers providing their technical skills, while Norris funded their efforts and was beneficiary of any patents that might come about through this arrangement.

In June 1868, the three partners were granted U.S. Patent No. 78603, which included both the conversion of the Chassepot for use with metallic center-fire cartridges, and for a new type of breech-loading rifle action. Later known as the Mauser-Norris M67/69, this rifle became the first of what would become the best-known and most widely-duplicated bolt action design in the world. Designed for use with an 11mm cartridge, the primary characteristics of this design include a self-cocking feature which operated with the closure of the bolt; the use of an extractor for the removal of spent cartridge cases; and a flat mainspring integral to the bolt handle for actuating the rifle's firing pin. The 32 ? inch barrel featured a four rifling grooves with a 1:21.75-inch left-hand twist and mounted a graduated sight for use at ranges between 200 - 1200 meters. Overall length was 51.675 inches, and the rifle weighed 9.4 pounds and could accept a bayonet which weighed 1.5 pounds.

The initial success of the Norris-Mauser partnership was short-lived, however. The trio was unsuccessful in convincing the military forces of Europe that their new design, which was based on a rifle in use only by the French Army, was an innovation with far-reaching consequences and applications. In addition, France was unwilling to consider the expense of converting their Chassepot rifles, which were only recently acquired and were seemingly adequate, to a new system. Several additional refinements would be necessary before the name "Mauser" became commonly-used in military circles.