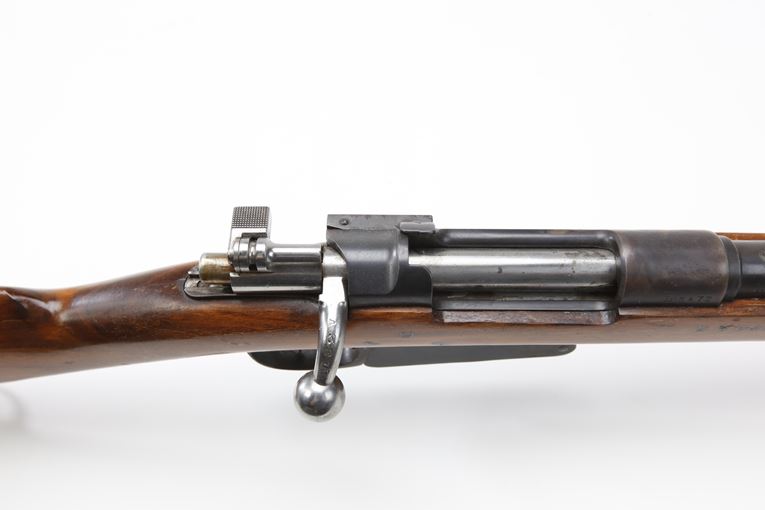 The Model 1891 marked two firsts for Mauser: this was the first of Paul Mauser's designs what chambered smokeless ammunition, as well as the first production Mauser rifle to employ a box magazine. Nine rimmed cartridges in a single-stack configuration could be loaded quickly by the use of a charger, or "stripper clip" that was inserted into the open bolt. Ammunition was then depressed into the magazine, and the clip was automatically ejected when the bolt was closed. This model was adopted by Belgium and Turkey as well as Argentina. SN B5472


By the early 1880s, European designers had turned their attention to the development of repeating rifles. Paul Mauser examined the feasibility of both tubular and box magazines, as well as a rotary magazine system. His work on the first two designs were later patented. In 1881, Wilhelm and Paul demonstrated their two magazine versions of the Model 71 for Kaiser Wilhelm I, and their success resulted in the Kaiser's order for troop testing during the following year.

This success was not without cost, however, as Wilhelm, worn out by travel and hard work, died early in 1882. The field tests with the modified Model 71 led to Germany's adoption of these rifles. Designated the Infantry Rifle Model 71/84, these utilized a tubular magazine in the fore-end. This rifle was the last Mauser design that utilized black powder cartridges.

In 1886, France adopted the Lebel bolt action rifle, which was chambered for an 8mm smokeless powder/metal jacketed bullet, and Germany soon followed suit with the Model 88 Commission Rifle. Paul Mauser had no part in the development of this rifle, but he soon designed his own smokeless cartridge rifle which featured a nine-round single-column magazine. To speed re-loading, Mauser designed a metal charger, or stripper clip, which was inserted into the top of the open chamber. Downward pressure on the clip-held ammunition quickly inserted it into the magazine, and the clip was automatically ejected by closing the rifle bolt.

Another feature of this design was the integral bolt head, which, unlike in previous models, could not be detached from the bolt and thus had the effect of making this rifle even more "user-proof." This design was adopted by Belgium in 1889, but production took place in Liege at both Fabrique Nationale and at the Belgian government armory in that city.

During the First World War, the Model 89 was also produced in the United States by Hopkins & Allen. Turkey, which had contracted with Mauser for production of the Model 71/84, later adopted this new design, and several South American nations followed suit. Designated the Model 90 and 91 respectively, these rifles were nearly identical to the Belgian Model 89 and were produced in both rifle and carbine versions.

Later improvements would produce the Model 93, which became Spain's principal infantry arm during the 1898 war with the United States. American military officers were sufficiently impressed by the Model 93's performance that the U.S. would shortly replace its Krag-Jorgensen rifles with the Springfield Model 1903 bolt action, which was based directly on the Mauser. The Mauser rifle design reached its apex in the famous Model 98, Germany's mainstay through two world wars, and was also produced in Oberndorf under various foreign contracts, as well as at arsenals throughout Europe. The Model 98 continued in service with various armies into the late 20th century, and "sporterized" versions of former Mauser military arms have become favorites with hunters and sportsmen.