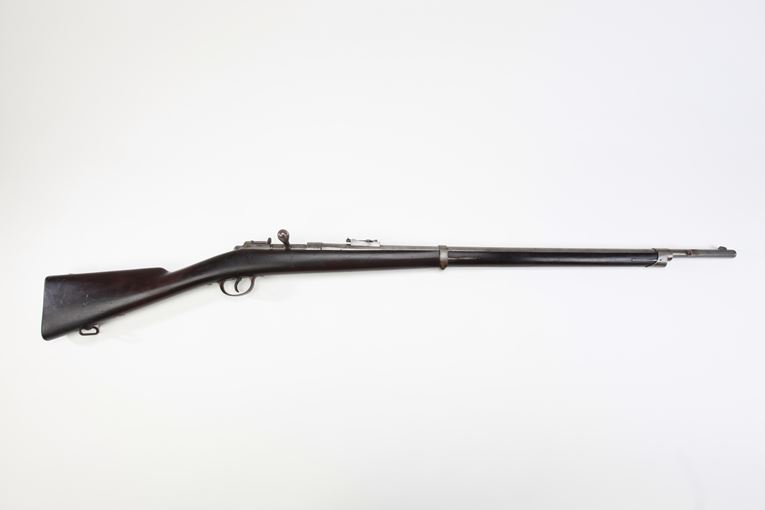 Early Mauser designs possessed a series of flaws that were addressed in two interim designs. Foremost was the split bolt handle, which could jam if foreign matter lodged between the spring and body; and the tendency for the flat mainspring to break if subjected to resulting stress. Paul Mauser also experimented with extractor/ejector location, and operation of the safety and cocking mechanisms. This rifle cocked on closing but possessed no means for manually re-cocking the action short of bolt operation.


During 1869 and 1870, Paul Mauser worked to correct several design flaws that would prove detrimental to military use of the Norris-Mauser Model 1867/69 rifle. The split bolt handle incorporated into the earlier design could easily jam should dirt or snow lodge between the flat mainspring and the body of the bolt handle. Since it also acted as a hammer, the spring could break under these circumstances.

The Norris-Mauser also had no safety mechanism, and the rifle's bolt was of such close tolerances that mass-production could be problematic. Mauser's solution to these problems was to re-design the bolt in a way that was markedly different from that of his earlier rifle. The new bolt consisted of four pieces: head, body, cocking piece, and cocking piece nut that screwed onto the firing pin. The bolt handle was mounted on the locking lug. In addition, the earlier flat mainspring was replaced with a coil spring, and a safety mechanism mounted on the right rear of the receiver operated by engaging grooves cut into the locking lug.

Actually, this interim design consisted of not one but two different bolts, both of which possessed the features mentioned previously. The first cocked on closing and, owing to the small cocking nut, must be re-cocked after firing by turning the bolt. The second bolt cocked on opening, and, due to its longer cocking piece, could be re-cocked without actuating the bolt. In addition, the location of the bolt and safety mechanism differed between the two designs. There is no evidence that either of these were patented; rather, both were most likely prototype "proof-of-concept" arms.

The Prussian Government tested these "Interim Mausers," and this process revealed several problems. Foremost among these was in the operation of the safety mechanism, which was remedied by the adoption of the rotating safety common to later models. Other deficiencies were addressed in the design of the Model 1871 rifle, which became the first Mauser to be officially adopted by a European army when Prussia selected it as a replacement for the Dreyse Needle Gun.