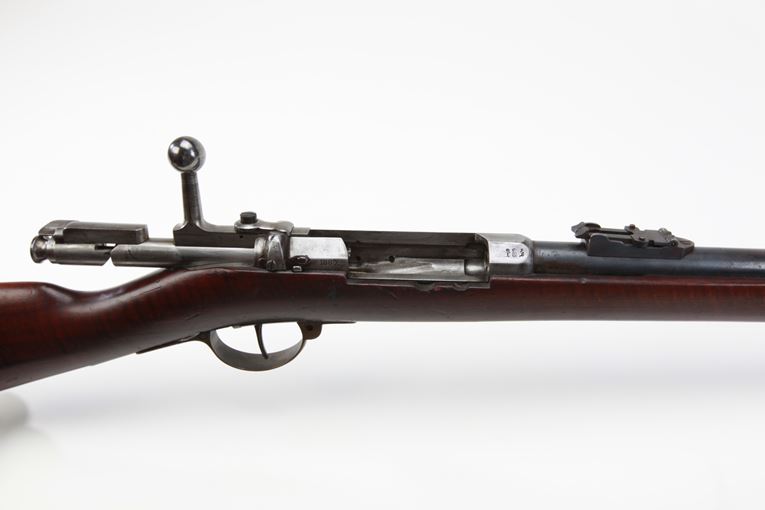 
Prior to the 1870s, repeating rifles had not found favor with military commanders in either the United States or in Europe. The American Civil War proved that repeaters could be effective at close range, but they were generally believed to be under-powered and ineffective over long distances. Although equal to or larger in caliber than many standard service cartridges of the time, contemporary repeating cartridges possessed less than half the propellant charge found in ammunition adopted for use in single-shot military long arms.

The undesirability of military repeating arms during this period was summed up by the British Committee on Small Arms, which stated that single shot rifles then in use, including the Britain's standard Martini-Henry, could be re-loaded quickly enough to minimize any advantages gained from the adoption of a magazine-fed rifle. In addition, the single-shot design was believed to be more robust, or even "soldier-proof" in its operation than were magazine arms. Switzerland's Model 1869 Vetterli and Austria-Hungary's Model 1871 Fruwirth rifles were the only repeating rifles then in use with European armies.

By the early 1880s, Britain had reversed herself on this matter, having recognized the advantage of repeating arms. A British Army commission recommended the Improved Lee System, which was patented in 1879, for adoption by Her Majesty's forces. Several of James Paris Lee's concepts would later become widely copied in other repeating rifles, including his detachable box magazine and symmetrical bolt locking lugs. The French Navy had already adopted a tubular magazine-fed repeater incorporating a selector, or magazine cut-off mechanism, that allowed soldiers to fire in single-shot mode while holding the contents of the magazine in reserve.

Following France's lead, Paul Mauser produced a similar arm in 1881. Mauser had experimented with at least four different internal magazine designs, including the under-the-barrel tubular design of the type used in Winchester's lever-action repeaters, as well as a tubular magazine contained within the rifle's buttstock, as featured in the Sharps rifles and carbines. In the latter, Mauser re-barreled a Model 1871 rifle and cut the bottom of the receiver to accept the magazine, which angled down into the buttstock. The magazine was fitted with a linked cartridge lifter, which ran under the barrel forward of the receiver and served to keep the linkage under spring tension. Opening the rifle bolt caused a cartridge to be fed from the magazine into the receiver, while the actual chambering of the round took place when the bolt was closed.

Other noteworthy features found in this rifle include the addition of a small lug fitted to the side of the bolt head in complement to the main locking lug, and a modification to the bolt stop to allow the bolt to be retracted far enough to facilitate feeding from the magazine.