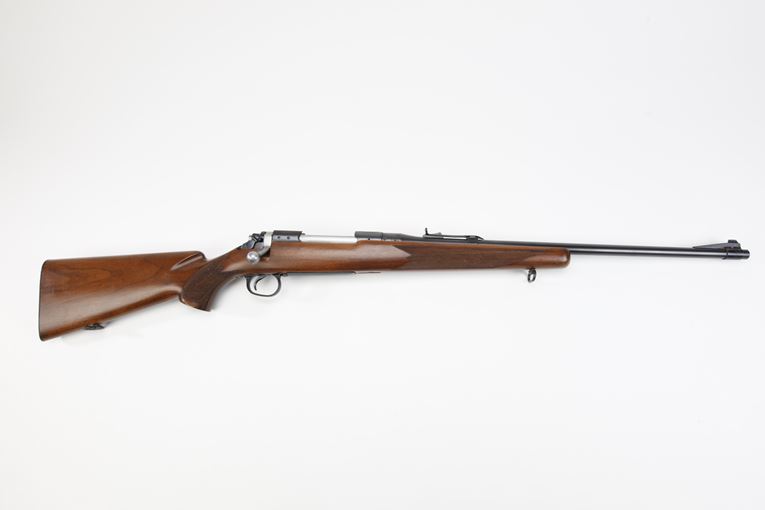 The Model 720A was produced between 1941 and 1944, with a total production of approximately 2500 rifles. Of these, nearly 1000, including the example seen here, were purchased in 1942 by the Navy Department and were awarded as trophies to winning Navy and Marine Corps personnel in a variety of competitions. These trophy guns can be identified by the Ordnance crossed cannon and inspector's proof marks on the stock.


The Remington Model 720 bolt action rifle, intended to compete with Winchester's popular Model 70, was produced in limited numbers until Second World War military requirements forced its discontinuation. Even some knowledgeable collectors and firearms historians may not be familiar with these rifles. Introduced by Remington in mid- to late-1941, the Model 720 was billed as an improvement over its predecessor, the Model 30S. The Ilion, New York arms maker offered these in .270 Winchester and .257 Roberts chamberings, as well as in .30-Ô06; and with barrel lengths of 20-, 22-, and 24 inches.

Other features included a semi-beavertail stock with checkered pistol grip and fore end; checkered steel butt plate; hinged floor plate; swept-back bolt handle, and speed-lock firing pin which cocked on the opening of the bolt. Remington intended to phase out the Model 30 shortly after this new design hit the market, but the Pearl Harbor attack and the subsequent U.S. entry into the

There they would remain, until an order for their destruction as surplus property was issued in 1963. Fortunately, Major Kam Hayden, U.S.M.C., who had just finished a tour as commander of the Marine Corps Marksmanship Training Unit at Quantico, Virginia, heard about the proposal to destroy these rifles. Maj. Hayden suggested that they be awarded as trophies to top Navy and Marine Corps competitive shooters.

This plan was approved, and beginning in 1964, the Model 720 was designated as the "Secretary of the Navy Trophy." A few rifles exhibited ill-effects from their long storage and were subsequently used as a source of parts, while the remaining inventory was divided between the Navy and Marine Corps to be awarded to winners at the National Matches at Camp Perry, Ohio, and at various divisional and inter-service matches. Presented in their original shipping cartons, these Secretary of the Navy trophy rifles feature an engraved magazine floorplate identifying the competition for which they were awarded. Some shooters won as many as seven of these rare trophies before steps were taken to limit the awarding of a rifle.

Of the approximately 2,500 Model 720s manufactured, the .30-Ô06 variant accounts for all but about 100 of those produced. A very few were purchased through commercial outlets before remaining stocks were obtained by the Navy. Of those, only a very few remain to be awarded to Navy and Marine Corps shooters. A "rare bird" from its early days, the Model 720 has become cherished as a symbol of marksmanship superiority as well as a fine presentation-grade rifle.

Eliphalet Remington II died in 1861, at which time Philo took over management of the company.

Samuel died in 1882, and Philo purchased his share in the company. By 1886, E. Remington & Sons had experienced serious downturns, and the company went into receivership.