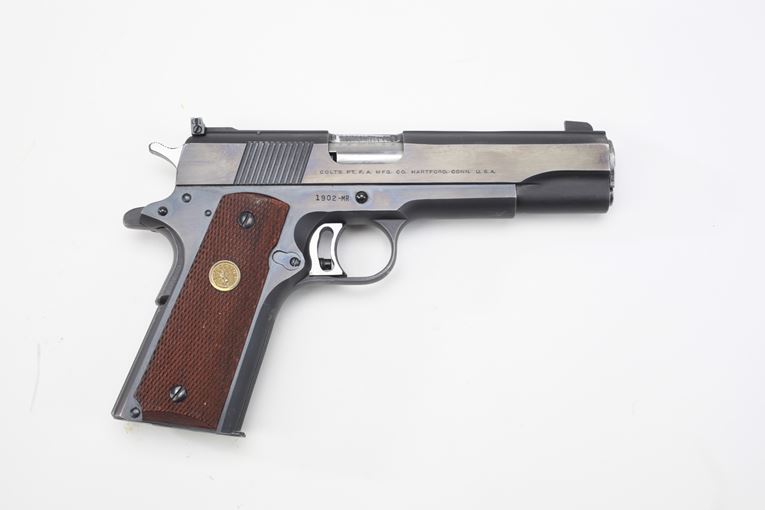 A limited production variation intended for target shooting, the Mark III pistol was chambered for the same mid-range wadcutter .38 ammunition used in many revolvers. SN 1902MR

In the summer of 1896, Browning traveled to Colt's Manufacturing Company in Hartford, Connecticut with four patented semi-automatic pistols of his design. Two of these guns were forerunners of such famous arms as the Fabrique Nationale Model 1900 and the Colt Model 1911. All possessed features that are still commonly used on semi-auto pistols such as slides, slide springs located over, under, or around the barrel, grip safeties, and detachable magazines located inside the butt. As a result of this visit, Browning signed an agreement that licensed Colt to produce his pistols and promised additional licenses for improvements in these designs. In return, Colt agreed to provide royalties, something that was foreign to Winchester at that time, as the firm bought patents outright from their designers. A year later, while visiting the Colt offices, Browning met Hart O. Berg of Fabrique Nationale of Belgium. Browning, Colt, and FN entered into a licensing agreement that gave the North American market to Colt, the European continent to FN, and a shared market in Great Britain. In addition, the two firms agreed to pay cross royalties for territorial "infringement." Browning was no stranger to Colt.

In 1830-31, while the sixteen year-old Colt was serving as a seaman aboard the brig Corvo, he observed the ship's wheel and the relationship of the various spokes to the center hub. This inspired him to make a wooden model of a revolving pistol. Although others had already experimented with revolvers, Colt's design was the first to automatically rotate the cylinder when the gun was cocked. After his return to the United States, he showed his model to his father, Christopher, and to Henry L. Ellsworth, a friend of the elder Colt who was then serving as Commissioner at the U.S. Patent Office in Washington. Both men encouraged Samuel to continue with his work and to seek a patent for his design. At this point in his life, Colt had an idea but no money with which to proceed on his new career path. For the next four years, he worked the traveling show circuit as "Dr. Coult of Calcutta." His lectures and demonstration of nitrous oxide to crowds in the U.S. and Canada provided a source of capital, which was forwarded to gunsmiths who produced working versions of his firearms designs.

In addition to the money he received, this period in his life also provided Colt with valuable experience in public speaking, marketing, and public relations. At age 20, Colt gave up touring and, with borrowed money, traveled to Europe to secure English and French patents for his revolving pistol. Upon his return to the United States in 1836, he also received a U.S. patent. In March, 1836, Colt formed the Patent Arms Company and began operation in an unused silk mill along the banks of the Passaic River in Paterson, New Jersey. His first product was a ring-lever revolving rifle, available in .34, .36, .38, .40, and .44 caliber, in which a ring located forward of the trigger served to cock the hammer and advance the cylinder for each shot. This was soon followed with a revolving pistol. These five-shot "Paterson" revolvers featured folding triggers, and were available both with and without loading levers in .28, .31, and .36 caliber. Patent Arms also produced smoothbore revolving carbines and shotguns.

The U.S. government was sufficiently interested in this idea that Colt received funding to continue his work for possible use in harbor defense. During this period, Colt met Captain Sam Walker of the Texas Rangers. Walker and his fellow Rangers had experience with Colt's Paterson revolvers, and one Paterson-armed troop of 15 men under the command of Jack Hays had successfully charged and defeated 80 Comanches, then considered to be the finest light cavalry in the world. Walker believed that an improved version of the earlier revolver would be an asset on the frontier. The two men designed a massive 4 pound, 9-ounce .44 caliber six-shot revolver, and the government ordered 1,000 of them for issue to mounted troops. Since Colt no longer had a manufacturing facility, he contracted with Eli Whitney of Whitneyville, Connecticut, to produce these guns. This order was completed in 1847, and Colt once again devoted himself to firearms production. He established a new factory in Hartford during that same year, and began production of a smaller, lighter .44 caliber revolver. These so-called "transitional Walkers" were followed by the First, Second, and Third Model Dragoon revolvers, as well by as the Baby Dragoon, the Model 1849 Pocket Revolver, and the Model 1851 Navy Revolver.

Many of these guns saw service through the Civil War and beyond. The discovery of gold in California stimulated the demand for firearms, and Colt also received orders from Russia and Turkey during the Crimean War. He expanded his operations to England, operating a manufacturing plant in London between 1853 and 1857. By this time, Colt operated the world's largest private armory, and he had introduced standardized production, division of labor, and assembly-line mass-production methods to his factory. In 1855, Colt introduced a spur trigger revolver that featured a fully-enclosed cylinder. These sidehammer, or "Root" revolvers, were named for Elisha K. Root, a noted inventor and holder of the sidehammer patent, who at that time was employed as Colt's factory superintendent and Chief Engineer. Colt also produced the sidehammer Model 1855 rifles and carbines for military and sporting use, as well as a revolving shotgun. In failing health, Colt expanded his factory on the eve of the Civil War, and began production of a new, lightweight .44 caliber Army revolver, followed a year later by a .36 caliber Navy version. Samuel Colt died in Hartford on January 10, 1862 at the age of 47.

Although he did not see the end of the Civil War, his products played an important role in its outcome. During the war, the Hartford factory produced revolvers, as well as the Colt Special Musket, based on the government's Springfield Rifle-Musket. The Model 1860 Army revolver was the primary issue revolver for U.S. troops, while other Colt revolvers were acquired through private purchase. The Colt Special Musket was issued to state troops, and the Model 1855 Revolving Rifle saw service with both Union infantry and cavalry, as well as with Colonel Hiram Berdan's United States Sharp Shooters. Colt firearms have continued to play a significant role in America's history. The post-Civil War period brought with it a variety of metallic cartridge revolvers, including conversions of percussion arms.

Perhaps the most famous of these is the Single Action Army revolver, often known popularly as the "Peacemaker," which saw widespread use in the hands of soldiers, settlers, gunslingers, and peace officers. Colt also produced a variety of other handguns, ranging from their deringer models to a line of .44 and .45 double-action revolvers. The slide-action Lightning rifles competed for a place in the market dominated by Winchester's lever-action models. In the 20th century, Colt-produced arms have served with U.S. and foreign forces in two World Wars, as well as a variety of limited conflicts.