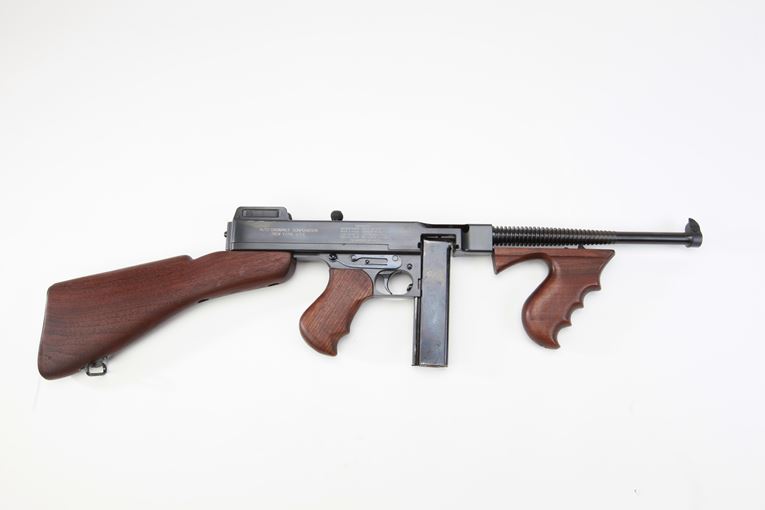 This Thompson carbine, intended for civilian, law enforcement and military sales, can be fitted with a fifty-round drum magazine or twenty-round box magazine. SN 411662


The term "submachine gun" refers to a small fully-automatic rifle that chambers a pistol-class cartridge. The first of these to be used in combat was the German-produced 9mm caliber Bergmann Maschinen Pistole18, also known as the Kugelspritz, or "bullet squirter," which made its debut in 1916. The famous MP38 and MP40 "Schmeisser" submachine guns, as well as the 7.92mm caliber Sturmgewehr 43 of Second World War fame, went into action with Nazi troops on all fighting fronts. The British Sten and Soviet PPSh provided Royal Commonwealth and Red Army troops with similar compact yet fully-automatic personal firearms.Although the U.S. Army initially showed a lack of interest in such arms in the years following the end of the First World War, Ordnance officers later reconsidered, and U.S. troops were also equipped with submachine guns in their fight against the Axis powers. Among these were the Reising Model 50 and Model 55, and the General Motors-produced M3 and M3A1 "Grease Guns."

Perhaps the most famous American design was the Thompson Model 1928 and Model 1928A1, both of which saw widespread use during the war. These guns, designed by retired U.S. Army general and ordnance officer John Taliaferro Thompson, were direct descendents of the famous "Tommy Gun," also known as "the gun that made the 20s roar." John Thompson was born in Kentucky in December 1860. He graduated from the U.S. Military Academy at West Point, New York in 1882, and later distinguished himself during the Spanish-American War, when he effectively directed elements of the Army's Ordnance department in the effort to keep the troops supplies with necessary munitions and equipment. He was later assigned to the Army's arsenal at Springfield, Massachusetts, where he contributed to the development and subsequent adoption of the Model 1903 rifle and Model 1911 pistol. He retired as a colonel in 1914, but was recalled to duty in 1917 when the United States entered the First World War.

During the war, he supervised the Army's production of small arms, and in this capacity he played a key role in the development of the Army's Model 1917 rifle. Thompson's outstanding performance earned him both a promotion and the Distinguished Service Medal. General Thompson's name was placed on the retired list after the conclusion of hostilities in 1918. Thompson's relationship with the Army did not end with his departure from active duty. He continued to show great interest in the development of new military arms, designing a semi-automatic battle rifle that he hoped would eventually replace the venerable bolt-action Ô03 Springfield. Thompson's rifle utilized a principle observed on shipboard artillery by U.S. Navy Commander John Blish, in which a threaded breech mechanism would remain locked under the heavy gas pressure generated by primer/propellant detonation within the cartridge, but which would open under reduced pressure as the projectile passed down the barrel. Thompson's design proved to be unwieldy and muzzle-heavy, and the inventor also discovered that cartridges for his rifle had to be lubricated to ensure proper cycling of the action. Eventually, the Army did adopt a semi-auto rifle, but the successful design belonged to John Garand, not John Thompson.

Meanwhile, Thompson had turned his interests and efforts to the development of an effective but reliable close-quarters arm that utilized the same 230-grain .45 ACP cartridge utilized by the M1911 pistol, a round that had proven itself countless times in the trenches of the Western Front. This new rifle also utilized the patented "Blish Principle," which some argued was actually nothing more than a delayed-blowback action. Blowback-action arms feature a breechblock that is forced open under recoil while being sufficiently heavy that their mass prevents them from opening fully until after the bullet has left the barrel. Thompson's design also featured a sliding bronze alloy wedge to further retard the blowback action of the breech.

After obtaining necessary financial backing, Thompson hired a design team and founded his own firm in 1916. Work proceeded even after Thompson's recall to active duty a year later, with experimental and test mechanisms produced under contract by the Warner & Swasey Company of Cleveland, Ohio. The inventor's son Marcellus, also a West Point graduate and artillery officer, joined his father's venture after leaving the Army in 1919. Auto Ordnance, as the new company was known, began development work based on Thompson's ideas, and by 1920, a prototype was ready for military testing. Both the Army and Marine Corps were favorably impressed by this new firearm. The gun was also successfully demonstrated at the National Matches at Camp Perry, Ohio in August of 1920.

Aside from its small 8 pound size and impressive 1500 rounds-per-minute rate of fire, the Thompson could be stripped and re-assembled quickly without the need for specialized tools. Based on its reception, the firm entered into agreements with subcontractors, including Colt and Remington, to produce parts and subassemblies for their gun, with assembly to be done by Auto Ordnance. The final design featured barrel-mounted cooling fins, a cocking handle located on the top of the receiver, vertical fore- and rear pistol grips, detachable buttstock, and either straight or "drum" magazines with capacities of 18 and 20, or 50 rounds respectively. A 100-round drum magazine was discontinued due to its tendency to malfunction in later versions of the Thompson. Given the designation "Thompson Submachine Gun, Model of 1921," these guns again took part in military trials.

Although they were not formally adopted, the Marine Corps obtained several hundred guns for use in the jungles of Nicaragua, and by Marine troops assigned to guard the U.S. Mail after several spectacular armed heists. Thompsons were also used by Navy boarding and landing parties and aboard the ships of the Asiatic Fleet, but true military success would come in the future. The "Tommygun" achieved its greatest notoriety during this period due to its association with the gangsters of the 1920s and 30s, and its subsequent adoption by the F.B.I. and various state and local law enforcement agencies. These guns also gained favor with those on both sides of the law in various countries in Central and South America, Europe, and Africa.. In the first seven years after its introduction, Auto Ordnance sold approximately 6,000 submachine guns.

In 1928, the Navy formally adopted the Thompson after Auto Ordnance made several changes in its design. Among these was the inclusion of a heavier actuator which decreased the gun's rate of fire from 800 to 600 rounds per minute, a horizontal fore end in place of the original vertical pistol-type fore grip, and the inclusion of the Cutts Compensator to override the muzzle's tendency to climb during firing. The Army also adopted a Parkerized version of these arms under the designation of M1928A1 for use by cavalry troopers, and by tank and scout car crews. Models offered on the commercial market offered buyers a choice between the original or new features.

During that same year, the death of Thomas F. Ryan, Thompson's business partner and the chief financier of Auto Ordnance resulted in the decision by Ryan's executors to limit new business. The company's financial health was further undermined by the Great Depression. After ten years of declining fortunes coupled with half-hearted efforts on the part of the Ryan family to sell their stake in the company, Russell Maguire, a Wall Street financier, agreed to underwrite the sale of the company through a public stock offering.\

Marcellus Thompson and Maguire formed a new company, the Thompson Automatic Arms Corporation, but this too was beset with a host of legal and financial problems. Maguire subsequently managed to take over the firm after Marcellus Thompson suffered a debilitating stroke. He succumbed in October 1939, eleven weeks after he was stricken, and the elder Thompson died of a heart attack in June 1940. Auto Ordnance, now a wholly-owned subsidiary of Thompson Automatic Arms, survived despite the deaths of these key figures. As a new world war loomed on the horizon, the Army ordered an additional 950 Thompsons. Having exhausted the original supply of Colt-produced examples, Auto Ordnance made arrangements to produce the M1928A1 through a license agreement with Savage Arms Co. of Utica, New York.

In addition, Auto Ordnance also started its own production facilities in a renovated Bridgeport, Connecticut factory. Initial production runs were largely provided to Great Britain under the Lend-Lease program, but U.S. Army orders quickly swelled after the Japanese attack on the U.S. Pacific Fleet at Pearl Harbor. To meet this rising demand, the Thompson was modified by the replacement of the Lyman adjustable rear sight with a simpler stamped peep sight, and the elimination of checkering on the safety and fire selector switches, and on the cocking knob.

Additional accessories were available for these guns, including cleaning kits, slings and swivels, bipod mounts, blank- and .22 caliber conversion kits, bayonets, and even a silencer. Various experimental model Thompsons were produced as well, including versions that chambered the 9mm and .30 carbine caliber cartridges, but these never entered production. In 1942, the Army adopted a new Thompson model, designated as the M1, which eliminated the option of using a drum magazine; instead, these guns mounted a new 30-round box magazine. Additionally, the Blish sliding-wedge locking mechanism, barrel cooling fins, and Cutts Compensator were eliminated, and the cocking handle was moved from the top of the receiver to the right side. The M1 also featured a non-detachable buttstock and grooved horizontal fore grip. The later M1A1, which was the last production Thompson submachine gun, replaced the separate bolt-mounted firing pin with a projection on the bolt face which struck the cartridge primer as the round was fully chambered, as well as adding vertical protective "ears" to the rear sight. The Thompson was the only Allied submachine gun to be produced throughout the war.

By the time military production ended, approximately one million Thompsons of various models had been produced. These found favor with British commandos, U.S. Marine Corps Raiders, U.S. Army Ranger and Airborne units, and with regular infantry troops as well. Sometimes criticized for its weight and for the .45 ACP's inability to penetrate dense undergrowth and jungle foliage, the Thompson was unbeatable at short-ranges. These guns were also extremely reliable, even in the dirt, rain, and mud of the battlefield.

Although later replaced by other designs, many Thompsons were rebuilt at government arsenals, and they continued to see action even during the war in Vietnam. In 1949, Maguire sold Auto Ordnance to Kilgore Manufacturing Company of Westerville, Ohio. The firm changed hands once again two years later when George Numrich purchased the assets of the company. For several years, the Auto Ordnance continued to sell Thompsons on a limited basis, and the firm also sold parts and provided repair services for these submachine gun and for other obsolete brands.