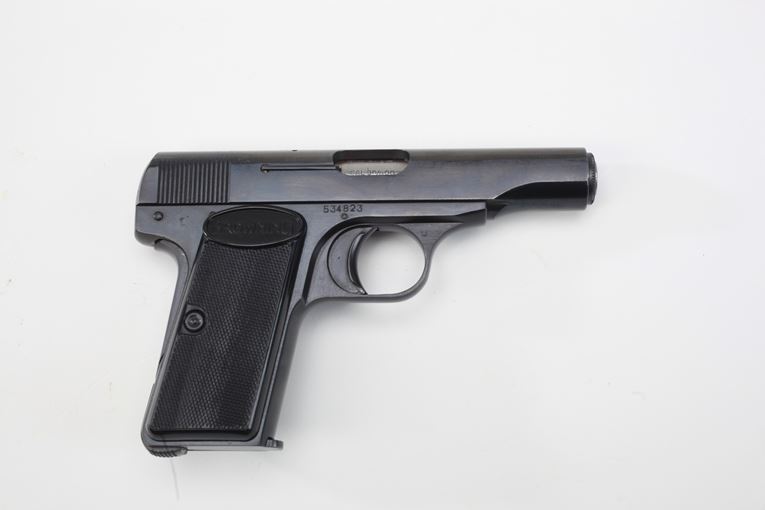 While made at Fabrique Nationale's Belgium factory, this semi-automatic pistol was imported and sold to the American market through Browning's St. Louis, Missouri offices. SN 534823

In partnership with five of his brothers, Browning later opened a machine shop in Ogden, Utah, but the firm's output of three guns per day could not keep up with demand for his products. One of his rifles was purchased by a representative of Winchester Repeating Arms Company and shipped to Thomas G. Bennett, the firm's General Manager, who purchased the patent rights for $8,000 and hired the Browning brothers as Winchester "jobbers". At this time, Winchester's popular Model 1873 lever-action rifle could not handle large-caliber ammunition such as the .45-70 cartridge. Browning set himself to this task, and he designed and patented a simple but strong lever-action rifle with a smooth action. This rifle, which would become the Winchester Model 1886, could handle cartridges as large as the .50-110 Express, and is considered by some to be the finest lever-action rifle ever. Browning's association with Winchester continued until 1902 and resulted in the Model 1885 Single Shot Rifle, the Model 1887 lever-action shotgun, the Model 1893 and Model 1897 pump-action shotguns, and the Model 1892, Model 1894, and Model 1895 lever-action rifles.

Browning moved to Hartford to supervise the manufacture of these guns by Colt and other contractors, but by the time production reached its peak, the war had ended. However, these guns played an important role during the Second World War and other conflicts. Browning's post-First World War military designs included both water- and air-cooled .50 caliber machine guns, and a 37 millimeter automatic cannon for use in aircraft. For the civilian market, he was responsible for the Auto-5 semi-automatic shotgun, the Superposed double shotgun, the Hi-Power semi-automatic pistol, and several other designs, including a .22 caliber rifle with one spring and a single moving part. All told, John Browning received over 120 U.S. and foreign patents for over 80 different firearms, and his designs were produced by a variety of manufacturers. He died of heart failure in 1926 at age 71 in the Fabrique National office of his son, Val.