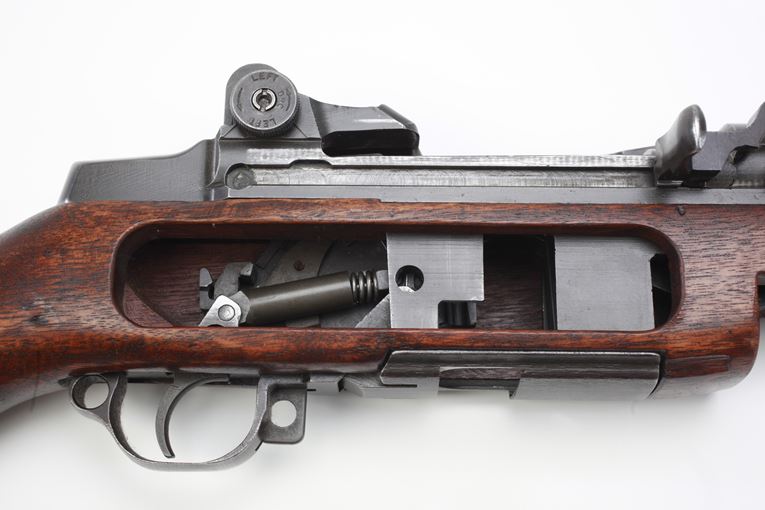 This cutaway M1 rifle was originally built to be mounted inside an electrically-operated mechanism that cycled the action for demonstration purposes. SN 4727229


John Cantius Garand was born on New Year's Day, 1888 in St. Remi, Quebec, Canada. After spending his early years in Canada, he moved with his family to Connecticut. Showing great mechanical aptitude from an early age, he designed and patented a screw jack at the age of 14; by his nineteenth birthday, Garand was working as a machinist.As his career progressed, he gained experience in tool and gauge making and design. Garand was also an accomplished marksman. On one occasion, it is said that he spent over $100 in a single day at the shooting galleries of Coney Island.

The Marine Corps followed suit in November, 1941, based at least in part on the rifle's favorable performance on Guadalcanal. Garand's original design was not without its share of problems. Most notable among these was a load failure with the seventh cartridge contained in the 8-round en bloc clip, a tendency to eject the clip with one round remaining, and an operating rod malfunction caused by prolonged exposure to rain. All of these were solved through minor improvements prior to the outbreak of the Second World War. Original production M1s utilized a gas-trap actuator. This was changed to a gas-port system in 1940.

Eventually, these early production rifles were converted to the new system during normal ordnance maintenance and rebuild cycles, but some did see service in the Philippines during the early days of the war. Other changes included the use of a compartment in the buttstock for storage of cleaning supplies, and improved sights. M1 variants include the M1C and M1D sniper rifles. Initial production was limited to Springfield Armory, and by the end of the war, nearly three and one-half million M1s had been produced in its shops. By mid-1943, Springfield's output topped 4,000 rifles each day. Winchester Repeating Arms accounted for over 500,000 more. With the conclusion of hostilities, Winchester's M1 production lines were shut down, and Springfield concentrated on rebuilding surviving service rifles. Production resumed during the Korean War, when nearly one million M1s were manufactured by Springfield Armory, Harrington & Richardson, and International Harvester. Production of the M1 ended in 1957.

The United States was the only nation to issue a semi-automatic rifle as a standard infantry arm during the Second World War, and the Garand's firepower proved to be a decisive factor in combat. The M1 proved to be rugged, dependable, and accurate, and it was also easy to strip and maintain in the field. M1s saw service in all theaters of the war and in extreme climates from the deserts of North Africa and the jungles of the Pacific to the frozen forests of Belgium and Germany. Although initially viewed with suspicion by the soldiers to whom it was issued, the rifle proved itself time and again to be superior to any other infantry long arm up to that time.

In fact, General George S. Patton called the M1 ". . . the greatest battle implement ever devised." General Douglas MacArthur added, "The Garand rifle . . . is one of the greatest contributions to our armed forces." Garand received many awards for his rifle, the highest of which came in March, 1944, when he was presented with the Civilian Medal of Honor for "exceptionally meritorious service to his country." He continued his work at Springfield Armory until his retirement in 1953, after 34 years of service. The M1's successor, the selectable-fire M14, was based on his earlier design. All told, he held fifty-four firearms-related patents, all of which were signed over to the government, with no additional compensation paid to Garand other than his salary. John Garand died in Springfield, Massachusetts in 1974 at the age of 86. - Harrington & Richardson, located in Worcester, Massachusetts, was founded in 1871 by Gilbert H. Harrington, the inventor of the top-break revolver, and William A. Richardson.

By 1876, H&R had become sufficiently established to be represented at the National Centennial Exposition in Philadelphia, where the company exhibited 24 of its pistols. In 1880, H&R achieved another significant milestone in becoming the sole American licensee for the manufacturer of quality English Anson & Deely double-barrel hammerless shotguns, and in 1900, the company introduced its own top-break single barrel shotgun. In the years prior to the First World War, Harrington & Richardson's product line expanded to include other shotguns and revolvers.In addition, H&R produced an improved semi-automatic pistol patterned after British Webley & Scott, as well as the Handy Gun, a top break single-shot pistol that was available in various calibers and small-bore shotgun gauges.

In addition to these revolvers, H&R also produced handcuffs and leg irons for police use. When the United States went to war again in 1941, H&R produced the Reising .45 caliber submachine gun under contract with Eugene Reising, the gun's inventor. These delayed blowback arms, which fired from closed bolt, were more accurate than conventional "slam fire" submachine guns such as the Thompson, but Army acceptance tests showed that the Reising's close tolerances caused function problems when not cleaned regularly or when operated in dirty conditions. With Thompson production earmarked for Army and Lend-Lease purchases, the Marine Corps adopted the Reising, in both conventional wood stock and folding metal stock models, to supplement its insufficient submachine gun inventory. Reisings saw action on Guadacanal, where their performance was problematic due to the near impossibility of keeping them clean under jungle combat conditions. The Marines received their last Reisings in 1943, after which they were withdrawn from front line use as additional Thompsons and M1 carbines became available. Approximately 100,000 Reisings were manufactured, including some for Lend-Lease sales to the Soviet Union. A semi-automatic civilian version was also produced for use by defense plant and prison guards. After the war, H&R discontinued production after attempts to sell Reisings to police departments failed due to the ready availability of surplus military arms. During the Korean War, Harrington & Richardson once again turned its production lines to the manufacture of military arms.

On April 3, 1952, H&R received an order for 100,000 M1 rifles plus spare parts, and the first deliveries were made a year later. The company's experience as producer of firearms enabled it to begin production without the start-up problems experienced by other military contract arms producers, including International Harvester. Unlike other M1 manufacturers, H&R also made extensive use of subcontractor-produced parts and components in their rifles. The end of hostilities in July 1953 meant that most H&R-produced rifles were added to postwar inventories. The company continued to receive additional contracts for the M1, and by the time production ceased in 1956, H&R had produced 428,600 rifles. The end of production did not mark the end of the company's association with John Garand's rifle, as H&R later received a contract to rebuild 50,000 M1 rifles in 7.62mm NATO caliber for the U.S. Navy. In late 1954, Harrington & Richardson received an additional contract to conduct an engineering study aimed at production of 500 T48 rifles, an American version of the Belgian FN FAL .30 caliber rifle which was under consideration as a possible successor to the M1 as the U.S. military's standard battle rifle. In 1957, the Army adopted the Springfield Armory-developed M14, which was based on John Garand's original M1 design.

These rifles becamethe first multi-purpose American infantry rifle, replacing the M1 rifle, M1 carbine, Browning Automatic Rifle, and M3 submachine gun. As with the M1, the Army issued contracts for the M14 to Winchester and H&R to supplement production at Springfield Armory. H&R's tool-up and manufacture began quickly, with the company utilizing machinery left over from M1 production, but problems arose with subcontracted parts. To further complicate manufacturing efforts, inspectors discovered cracks in some receivers. H&R's M14 production came to a halt as the Army changed both metallurgical and heat treatment specifications for these rifles. With problems now corrected, H&R was able to make up for lost production time and get back on schedule by August 1961. By the time production ceased, Harrington & Richardson had manufactured over 500,000 M14s, making the company the largest manufacture of these rifles. H&R also produced the M16 "black rifle" under contract with the Department of Defense, as well as the M4 survival rifle, a .22 Hornet/.410 combination gun manufactured for use by U.S. Air Force flight crews. Harrington & Richardson exists today, but under a new name, the New England Firearms/H&R 1871. In addition to producing a complete line of pistols, rifles, and shotguns based on their earlier designs and ranging from inexpensive to presentation-grade models, the company is a U.S. distributor for British-made Webley & Scott shotguns.