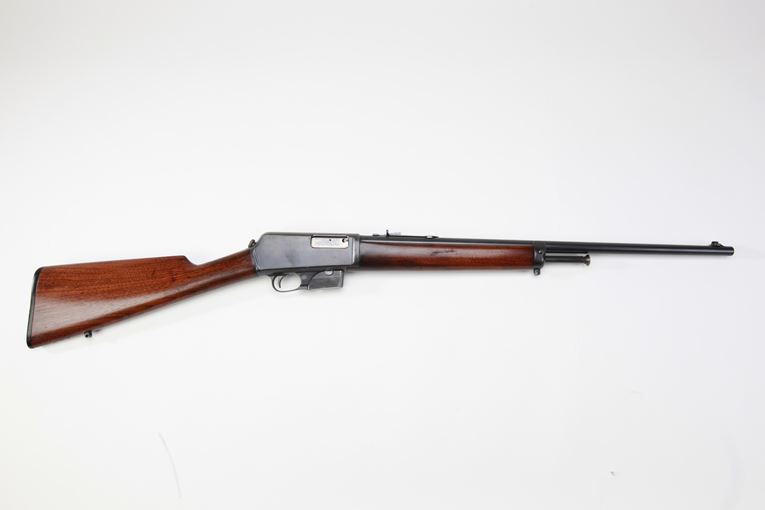 A novel self-loading design that utilized a box magazine, the Model 1907 rifle was an improvement over the earlier Model 1905. The Model 1905 was developed by Winchester designer T. C. Johnson from John Browning's Model 1890 Slide-Action Rifle. SN 14226


John Moses Browning (1855 - 1926) was a true genius of mechanical design. The son of a Mormon gunsmith, he began working full-time in that profession at age 15. His 1878 design for a single-shot metallic cartridge rifle resulted in the first of many patents that he would receive during his lifetime. In partnership with five of his brothers, Browning later opened a machine shop in Ogden, Utah, but the firm's output of three guns per day could not keep up with demand for his products.One of his rifles was purchased by a representative of Winchester Repeating Arms Company and shipped to Thomas G. Bennett, the firm's General Manager, who purchased the patent rights for $8,000 and hired the Browning brothers as Winchester "jobbers".

As a result of this visit, Browning signed an agreement that licensed Colt to produce his pistols and promised additional licenses for improvements in these designs. In return, Colt agreed to provide royalties, something that was foreign to Winchester at that time, as the firm bought patents outright from their designers. A year later, while visiting the Colt offices, Browning met Hart O. Berg of Fabrique Nationale of Belgium. Browning, Colt, and FN entered into a licensing agreement that gave the North American market to Colt, the European continent to FN, and a shared market in Great Britain. In addition, the two firms agreed to pay cross royalties for territorial "infringement." Browning was no stranger to Colt. In 1888, he came up with the idea of harnessing propellant gas from the muzzle of a rifle to cycle the gun's action.

Three years later, he took his patented design for the world's first gas-operated fully-automatic "machine gun" to Hartford. Under Colt auspices, he demonstrated this gun for the U.S. Navy, which was interested in obtaining machine guns that were capable of firing continuously for three minutes. Browning doubted the ability of his prototype, with its 600 rounds-per-minute rate of fire, to stand up to this punishing test. Although the barrel turned red-hot, the gun successfully completed the trial, and Browning signed a licensing agreement with Colt. These machine guns later saw action in both the Spanish-American War and the Boxer Rebellion.