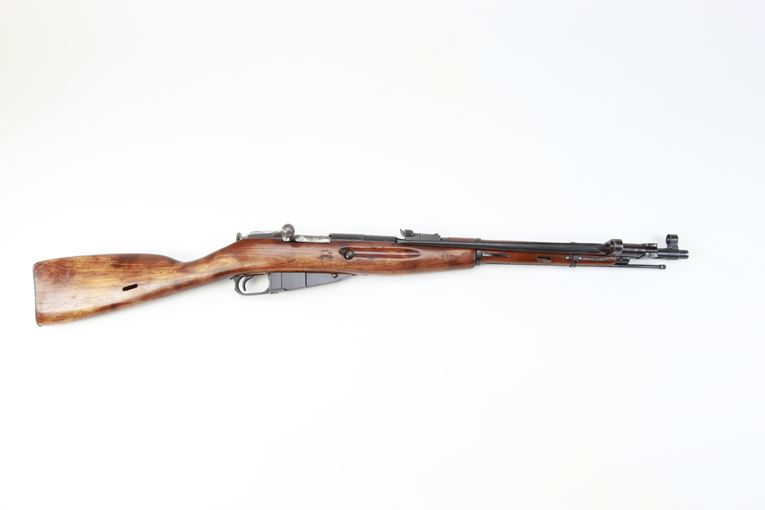 The short Model 1944 carbine was the last of the Mosin-Nagant longarms to be used during World War II. SN TT3601

During the First World War, an additional 1.5 million Model 91 rifles were produced in the United States by Remington Arms Company and New England Westinghouse. The Tsar's abdication and the subsequent October Revolution of 1917 forced the cancellation of these two contracts, and a large number of Model 91 rifles remaining in the United States were purchased by the U.S. government. Many of these were later shipped to Russia, while others, designated the U.S. Magazine Rifle caliber 7.62mm Model of 1916, were used by U.S. troops as training arms. These rifles were later sold to National Rifle Association members by the Director of Civilian Marksmanship at a cost of $3.50 each. Other Mosin-Nagant rifles were sold as surplus to an un-named entrepreneur, who converted to them to the U.S. .30-Ô06 caliber. These rifles proved to be extremely dangerous to shoot, and most were subsequently destroyed.

The Model 91 was also used by American soldiers who took part in the Siberian Expedition of 1918-20. This little-known chapter in U.S. military history saw the participation of approximately 10,000 American troops as part of a multi-national force dispatched to Russia to secure railheads and stockpiles of war materiel against seizure by German troops after Vladimir I. Lenin's Bolsheviks signed a separate peace treaty with the Kaiser. The Mosin-Nagant rifle was produced in several variants, including a rifle, Dragoon (cavalry) rifle, carbine, and a sniper model equipped with a turned-down bolt handle and telescopic sights. At least three versions were introduced.

The most common employed a 3-power "PU" straight-tubed sight that was inserted into a slide mount which affixed to the left side of the receiver via screws and pins. Another featured a 4-power "PE" scope similar to the German Second World War-vintage Zeiss. This sight also mounted to the left side of the receiver. The third version utilized the "PE" scope with a center-line over-the-bore mount which was fixed to the front of the receiver ring. All of these sights were adjustable for both elevation and windage, but they lacked a focus adjustment. Captured Soviet sniper arms were equally popular with Nazi troops, even though the Wehrmacht had fielded its own sniper rifles based on the Mauser 98k and Walther G41 and G43. Finland, a Russian protectorate until 1917, also used Mosin-Nagant arms produced at their arsenal at Tikkakoski, as well as contract models manufactured by SIG in Switzerland and Steyr in Austria.