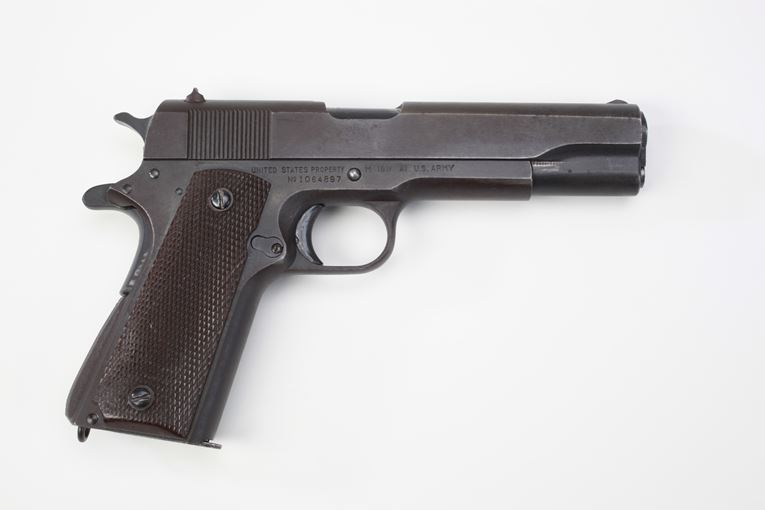 Union Switch & Signal manufactured a variety of ordnance-related items during both World Wars. In April 1942, the company received a contract for the production of 200,000 Model 1911A1 pistols. Due to a drop in projected requirements, this number was later reduced to 55,000, the last of which were shipped in November 1943. This makes US&S second only to Singer for the smallest production run of M1911A1s during the Second World War.


Union Switch & Signal, which was originally located in the Pittsburgh suburb of Swissvale, Pennsylvania, is a manufacturer of railroad switching and signaling equipment. Organized by George Westinghouse in 1881, the firm became a subsidiary of Westinghouse Air Brake Co. in 1917. US&S produced aircraft engines, artillery shells, and rifle parts during the First World War, and the company received several Second World War Ordnance contracts for production of a variety of munitions.

During the later conflict, US&S manufactured bomb tail assemblies; artillery and anti-aircraft shells; chemical mortar fuses; dial wheels for Navy code machines; and receivers, slides, and bolts for the M1 Carbine; in addition to the M1911A1 pistol. Still based in Pittsburgh, Union Switch & Signal is currently a wholly-owned subsidiary of Ansaldo Signal, a Netherlands holding company. The M1911 pistol emerged from the "War to End Wars" with a reputation for being superior both to its predecessors in U.S. service and to sidearms then in use by other military forces around the world. John Browning's design, with its large tolerances, was extremely reliable in the mud and dirt of the battlefield, and the effectiveness of its potent .45 ACP cartridge had proven itself in combat.

Although no postwar changes were contemplated, several modifications were incorporated into the frame, trigger, grip safety, and hammer of the original M1911 design. The improved pistol was adopted by the Army in 1923 as the M1911M1, later changed to M1911A1. Existing M1911s would not be modified for reasons of economy, but new production models were to include designated changes, and parts for these pistols were required to be interchangeable with the earlier M1911. Colt also included these improvements in their Government Model .45 pistols offered for commercial sale.

Subsequent modifications to military .45s included the substitution of plastic grips and a gray, non-reflective "parkerized" finish in place of the original walnut grip panels and blued finish. During the 1920s, efforts were made by the Army to standardize production drawings and gauges to ensure complete interchangeability of parts between pistols produced by various contractors. Although First World War-produced M1911s were required by contract to be interchangeable, this goal was never achieved. Springfield Armory produced both drawings and gauges based on the wartime process used by Remington-Union Metallic Cartridge, but these were found to be quite different from Colt-produced examples.

A revised set of standard production drawings and gauges based on Colt's manufacturing process were produced in 1936. This project was both expensive and time-consuming, but the effort proved to be invaluable in setting up new contract production lines for these pistols. Approximately two million M1911A1s were manufactured during the Second World War with few of the problems that had accompanied contract production during the "Great War." Colt manufactured the M1911 and M1911A1 pistols continuously from their initial adoption by the Army throughout the Second World War, and was the sole producer of these pistols between 1919 and 1940.

Between the wars, few pistols were purchased by the U.S. military as sufficient numbers were on hand to meet peacetime needs. During this time, Colt successfully sold the pistol overseas. The military forces of Mexico and Argentina both adopted them as their standard service pistol, and Colt produced these pistols under British military contract after the war began. In addition, the firm's commercial sales were bolstered by the inclusion of the new National Match .45, Super 38 Automatic, and Ace .22 caliber pistols, all built on the M1911A1 frame. Even after the outbreak of war in Europe, U.S. military purchases of war materiel continued to languish.

As the international situation continued to deteriorate in 1940, the United States declared a limited emergency and began a peacetime mobilization. The War Department placed additional orders with Colt, and the Army set out to identify other potential military contractors. In an effort to reduce the amount of time required to achieve full production of materiel essential to national defense, the Army Appropriations Act of 1938 authorized funding for the issuance of "educational orders" to train private contractors in production methods for various arms and armaments.

Surveys conducted by Ordnance officers identified qualified companies, and these firms were then invited to bid on contracts to produce limited numbers of specific items. The costs associated with tooling up for production were born by the government, both for educational orders and for later wartime contracts. In January 1940, Singer Manufacturing Company, an Elizabeth, New Jersey-based producer of sewing machines, and Harrington & Richardson Arms Company of Worcester, Massachusetts, received educational orders for the production of 500 M1911A1 pistols and related tools.

Both Colt and Springfield Armory provided technical assistance to the two contractors. Singer-produced pistols were delivered to Springfield Armory by December 1941, and these were distributed to Air Force personnel. The company was given a contract for an additional 15,000 pistols, but Singer's production of artillery fire control directors was deemed a higher priority, and this contract was later canceled. Due to their high quality and limited numbers, Singer M1911A1 pistols are highly prized by modern collectors. Harrington & Richardson was in the process of a bankruptcy reorganization and was able to produce fewer than 20 pistols, none of which were accepted by the Army before their contract was terminated in June 1942. However, the firm was able to obtain or manufacture most of the items required for production of the M1911A1.

This equipment, as well as that used by Singer and First World War-vintage tooling and machinery from Remington-U.M.C. was shipped to the Remington Rand factory in Syracuse, New York for subsequent redistribution to other contractors and sub-contractors for the .45 semi-auto pistol. When the Japanese attack at Pearl Harbor brought the United States into the war, the need for arms of all types quickly became critical.

Between 1941 and 1945, Colt was primarily engaged in the manufacture of machine guns, but M1911A1 production continued as well. The firm provided technical assistance to contract manufacturers of these pistols. Colt suspended production of its Government Model pistols in 1942, and more than 6,000 unsold guns were restamped with new serial numbers and Ordnance markings and parkerized before being transferred to the Army.

Commercial model slides, magazines, and other parts were also diverted to fill military orders. Colt produced more than 400,000 M1911As before cancellation of military contracts in September 1945. The Ithaca Gun Company of Ithaca, New York had also been invited to submit a prewar bid for an educational order, but before their bid was received, the Army discontinued this program. The firm received an order for 60,000 pistols in mid-1942, and additional contracts were issued as the war progressed. Initial orders were filled using both newly-produced parts and some 6,000 surplus Colt receivers remaining from First World War production. Ithaca produced approximately 340,000 pistols, or about 20 percent of the total output during the Second World War.

The largest producer of the M1911A1 was Remington Rand, a manufacturer of office equipment which had its roots in the Remington Arms Company of Ilion, New York. Remington Rand's Syracuse, New York plant turned out over one million .45 semi-auto pistols; more than 50 percent of the total wartime production for the M1911A1. Production began with an initial order for 125,000 in March 1942 and continued until the summer of 1945. In 1944 alone, the firm manufactured nearly 560,000 M1911A1s, exceeding the total wartime production of any other contractor, while achieving the lowest production costs of any M1911A1 manufacturer. Union Switch and Signal, a subsidiary of the Westinghouse Air Brake Company located in the Pittsburgh suburb of Swissvale, Pennsylvania, became the fourth and final wartime contractor for the M1911A1 when it accepted an order for 200,000 pistols in May 1942.

Although this firm was a manufacturer of railroad equipment, U.S.&S. produced a variety of ordnance materiel during both world wars. As with Ithaca and Remington Rand, production pistols were assembled from parts produced both in-house and from other suppliers. As U.S.&S. began production, the Army advised the firm that its contract would be canceled due to a projected decline in requirements for the M1911A1, but Ordnance officials substituted a contract for the production of M1 carbine receivers, slides, and bolts. The final shipment of 55,000 U.S.&S.-produced M1911A1s left the plant in November 1943.

The M1911and M1911A1 have the distinction of having served longer than any other military arm in the history of the United States. Although they would remain the standard sidearm for U.S. forces until 1985, no additional examples were produced after 1945, and those remaining in military inventories through subsequent wars were subject to overhaul or rebuilding programs before being returned to the holsters of American servicemen and women.

Although sometimes criticized, these pistols provided American troops with a reliable and potent personal defense arm while becoming the stuff of legends as a result of their service in the desert, the jungle, and in mud, ice, and snow on numerous battlefields around the world. During their long service life, these Browning-designed and Colt-developed pistols have amassed a record that will likely remain unequaled by current or future military arms.