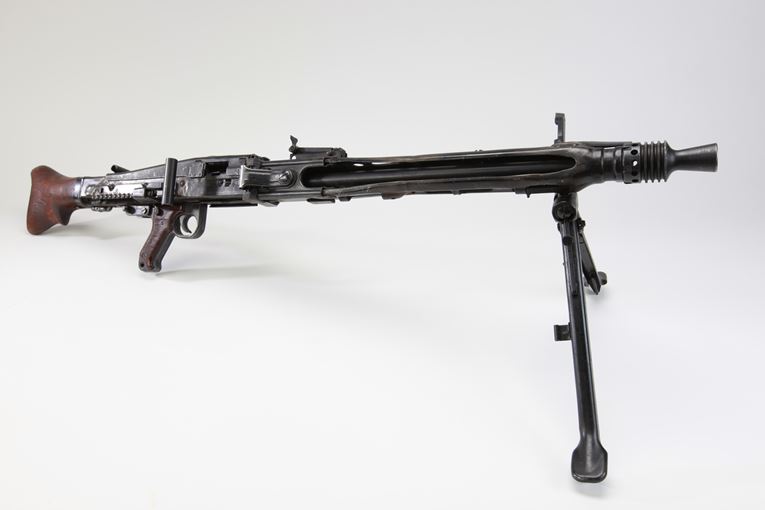 
During the early 1930s, the German Army's Ordnance Office sought a general-purpose machine gun but were dissatisfied with those available at the time. Among the features that the Army required were quick-change barrels, a belt-feed system, and various mounts, sights, and magazine boxes that would enable the new machine gun to serve a variety of functions including use in aircraft, anti-aircraft and armored vehicles, as well as for cover fire or continuous fire in infantry support roles.

Ordnance officials requested that Mauserwerke collaborate with Rheinmetall to modify and improve the latter firm's MG30. Mauser also called on small-arms designer Louis Strange for assistance in a re-design of his Solothurn Rh29 machine gun bolt mechanism. The MG34 was the result of this cooperative effort.

Developed in 1932-33, the MG34 (Maschinengewehr 1934) was the standard machine gun of Nazi military forces between 1935 and 1943 and was manufactured by several firms including Mauser-Werke A.G. and Steyr-Daimler-Puch. Chambered for the 7.92 x 57mm Mauser cartridge, this selective-fire recoil-operated gun had a rate of fire of 900 rounds per minute and could be fed by either a 50-round continuous-link belt or a 75-round saddle drum magazine.

The modified Strange bolt featured a rotating head with locking lugs and carrier rollers. These rollers rode in curved cam tracks located inside the receiver to unlock and re-lock the bolt during the recoil cycle. Changing the barrel was accomplished by holding the cocking handle to the rear and depressing a locking catch at the front of the receiver, then rotating the receiver/butt 180 degrees on a pivot point located at the junction of the receiver and the barrel jacket. An assistant gunner then used a heat-resistant mitt to slide the barrel from the rear of the barrel jacket. After insertion of the replacement barrel, the gunner rotated the receiver to its original position, where it locked into place.

The MG34 received its baptism of fire with General Francisco Franco's Nationalist troops during the Spanish Civil War, and some problems that arose at this time were corrected prior to the German invasion of Poland in September 1939. After German army units gained experience with the MG34, they began to request additional improvements, including an increase in the cyclic rate. In an effort to meet this request, as well as to simplify the gun's design, Rheinmetall produced a series of machine guns designated "MG34/41" for combat trials.

These guns were equipped with a shortened barrel, a braided wire mainspring, non-quick release cover hinge, an automatic fire-only trigger, and modifications to the major operating components of the gun, as well as to the operating handle, butt, and feedplate. Modifications were such that parts interchangeability with the original MG34 was no longer possible. This could have presented major problems had this design entered production, but the results of field trials showed design changes to be insufficient for formal adoption. Not without its shortcomings, including its complexity and a sensitivity to certain environmental factors, the MG34 proved itself to be a good general purpose machine gun.

Although superseded by the MG42, wartime exigencies ensured that the MG34 remained in service until 1945. These guns served with units of the Wehrmacht, Kriegsmarine, and Waffen-SS. The MG34 was proposed for use with the Luftwaffe as an aircraft machine gun, but this service considered it both too heavy and inferior to other designs. Nonetheless, the MG34 served with Nazi air force units as an anti-aircraft machine gun. The Luftwaffe's choice for an infantry machine gun was the FG42 (Fallschirmjagergewehr 1942; or "Parachutist's Rifle Model 1942"), which was developed by Rheinmetall from a design by Louis Strange and manufactured by Heinrich Krieghoff of Suhl, as well as by the firm of I. C. Wagner, Mulhausen, Thuringen, Germany.

Fed from a staggered box magazine that was mounted on the left side of the receiver, the FG42 was a gas-operated machine gun chambered for the standard 7.92 x 57mm Mauser cartridge and capable of firing at a rate of 750 rounds per minute. These guns incorporated a combination of machined steel and stamped sheet metal, along with wood and plastic furniture. Equipped with a post front sight and a folding aperture rear sight, the FG42 could also mount a detachable telescopic sight.

Also included was a reversible spike bayonet that stowed under the barrel, as well as a forward-folding sheet metal bi-pod that mounted forward of the front hand guard. These bi-pods exhibited an unfortunate tendency to collapse during automatic fire and were replaced in later models by a rear-folding bi-pod that mounted between the muzzle brake and the front sight.

Combining features of an automatic rifle and light machine gun, the FG42 was capable of semi-automatic fire with the bolt closed, or of full auto fire from an open bolt. Slightly shorter than the standard Wehrmacht Karabiner 98 bolt action rifle, the lightweight FG42, with its full-power Mauser rifle cartridge, was extremely unstable in automatic fire mode. Designer Strange reportedly preferred the smaller 7.9 x 33mm Kurz cartridge for use with this light machine gun, but was overruled by Germany's political hierarchy.

Original specifications called for the FG42 to be capable of launching grenades, but only a few modified examples met this requirement. Two variants of the FG42 were produced. The Type I is easily identified by the pronounced rearward rake of the pistol grip and its metal buttstock, as well as by the previously mentioned bi-pod mounting location. These early models accommodated either a 10- or 20-round magazine, while the later Type II version was designed to accept only the 20-round capacity magazine. Variations between the two types prevented interchange of their respective magazines.

Later models also incorporated a conventional profile pistol grip with a re-designed safety lever, as well as a folding spring-loaded double door-type dust cover that was located over the magazine well. The Type II also featured a wooden buttstock and a re-designed muzzle brake/flash suppressor which did little to eliminate the impressive fireball that resulted even during semi-automatic fire. Production of the FG42 began early in 1943, and approximately 7,000 were manufactured. Of these, roughly 5,000 were of the Type II variant.

In addition to its service with Luftwaffe airborne units, the FG42 also saw action with the Waffen-SS, most notably during Otto Skorzeny's airborne assault on the Italian mountaintop stronghold at Gran Sasso which freed Italian dictator Benito Mussolini from his captors. Developed during peacetime, the MG34 proved to be overly complex for effective mass-production by a nation at war. Its intended role as a universal machine gun required an increased number of parts, and many of these required forging and machining to close tolerances. Some ordnance officers realized these shortcomings even before the start of the Second World War and proposed a new machine gun that would feature greater tolerances than those specified in the MG34, making it less sensitive to foreign matter in the receiver. The new design was to use MG34 feed belts, mounts, and accessories.

Most significantly, this new gun was to utilize stamped parts produced by semi-skilled or unskilled labor to simplify manufacture and to reduce costs. These stampings could be produced by provided to manufacturers for incorporation into a finished product. Many German industrial firms opposed this plan, citing an inability to ensure proper quality control. Nonetheless, ordnance officials requested proposals from three companies for a machine gun that would utilize stamped rather than forged parts where possible.

One of these three firms, Dobeln-based Johannes Grossfuss Metall Fabrik, had never produced any type of firearms, but had extensive experience with stamped and pressed metal fabrication. All three firms presented their designs in early 1938. The Grossfuss gun featured a simple design and an action that was relatively unaffected by dirt. Although this gun had an unacceptable method of changing barrels, it was chosen over the gas-operated entries of Rheinmettal and Stubgen. Several improved versions were produced and tested, and by 1941, large-scale combat trials were conducted with 1500 guns.

After a series of favorable reports, these were formally adopted under the designation MG42. The recoil-operated MG42 employed several improvements over the earlier MG34, and in accordance with design requirements, this new machine gun was easier, faster, and cheaper to produce. The MG42 was originally equipped with a wooden buttstock, but later models included plastic stocks. The MG42 barrel was several inches shorter than that of the MG34, but both guns were nearly identical in overall length; however, the MG42 was lighter than its predecessor.

The Strange rotating bolt utilized in the MG34 was replaced by a bolt mechanism locked by a pair of rollers that engaged a matching pair of recesses in the receiver. This design, which was revolutionary for its time, served both to reduce the weight of the gun's mechanism, as well as to increase the gun's cyclic rate to 1200 rounds per minute. This devastating rate of fire earned the MG42 the sobriquet "Hitler's Buzz Saw," coined by U.S. troops who faced it in battle from the 1942 battle at Kasserine Pass, Tunisia, through the end of the war.

A second improvement incorporated in the MG42 design was a roller-driven reciprocating feed arm that was located on the inside of the receiver cover. This feature has been widely copied in other machine gun designs. The barrel change-out system that was unacceptable in the original Grossfuss design was replaced by a swing-out lever, coupled with a cutaway on the right side of the barrel jacket. The MG42's flash hider also served as a recoil booster, thus increasing functional reliability in a battlefield environment.

Although modifications to the original design were kept to a minimum during wartime manufacture and typically consisted of minor alterations, a simplified MG45 was under development prior to the collapse of the Third Reich. The MG42 proved itself to be an outstanding machine gun, operating reliably in a variety of climates ranging from the burning deserts of North Africa to the frozen steppes of the Soviet Union, as well as in maritime environments.

Over 400,000 were produced before Germany's unconditional surrender in 1945. During the post-war period, the MG42 served as the basis for machine guns produced for use by the armies of several NATO member nations. Many of these guns featured interchangeability with original MG42 parts, while incorporating certain improvements on the original design.